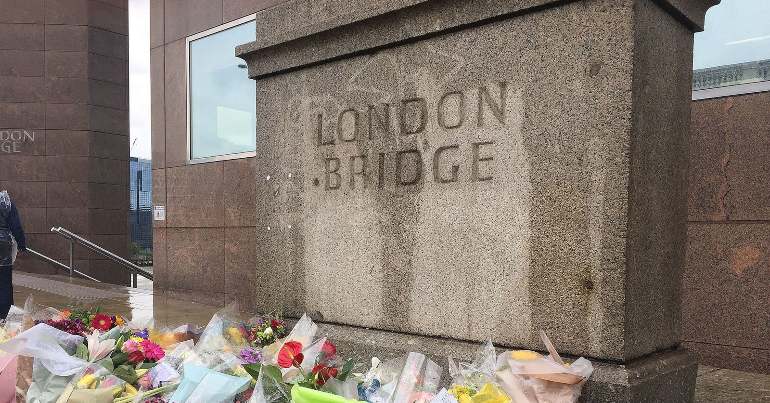 In 2019 the UK was convulsed by a shocking act of violence along London Bridge. On 29 November, two people were killed and another three injured in a stabbing attack committed by a radical Islamist who had previously served prison time for another terrorism offence. Predictably, the usual suspects in the right-wing media cynically used the attack and the background of the perpetrator to push their reactionary agenda. And as the 12 December election day neared, it was also inevitably used as ammunition for attacking Jeremy Corbyn. Of course, all acts of terror should unequivocally be condemned. But these right-wing forces need to be called out on their shameless misuse of the tragedy for their own political ends.

Almost as soon as details of the attack emerged online, right-wing pundits and ‘activists‘ began crowing about how such attacks supposedly prove their bigoted rantings have been right all along. Writing in the Spectator, for example, notorious neoconservative and supporter of the Iraq War Douglas Murray had this to say:

By ‘writing the same article again’, he presumably meant arguing that Muslim immigration will destroy “European civilization” and endorsing former prime minister David Cameron’s claim that “multiculturalism has failed” – as he has done in multiple previous articles, public appearances, and in his book Neoconservatism: Why We Need It.

Howls of ‘soft on crime’ and ‘political correctness gone mad’

Others cynically seized upon the attacks to argue for a more punitive criminal justice system. Writing in the City Journal, Theodore Dalrymple laid the blame on the government of Tony Blair for legislating a system of early release. He also mocked the ideas of prisoner rehabilitation and police monitoring of released prisoners.

The usual members of the ‘you can’t say anything anymore’ brigade, meanwhile, complained about the alleged ‘political correctness’ that apparently surrounds terror attacks. Writing in the Mail, for instance, Richard Littlejohn said:

The authorities are… reluctant to use any permutation of the word ‘Islam’ in relation to terrorism.

Inevitably, the incident was also used as a convenient tool to attack Corbyn on the eve of the general election. The Sun and Mail, for example, claimed respectively that he “appeared to blame” US President Donald Trump and the UK’s ‘special relationship’ with the US for the attack. Several of the above pundits and publications also criticised him for opposing Boris Johnson’s call for a change to the law so that convicted terror suspects serve their full term of imprisonment.

With the UK media landscape (including the BBC) overwhelmingly dominated by the political right – not to mention mostly owned by just a few large corporations and billionaires – it falls on independent media like The Canary to give some sense of perspective. Because behind each one of these arguments lies an avalanche of intellectual dishonesty and shameless political point-scoring.

For starters, the implicit right-wing assumption that the perpetrators of terrorist attacks are overwhelmingly Muslim is itself highly suspect. In the UK, for instance, the fastest-growing terrorist threat actually comes from the far right. And as the multiple far-right attacks on mosques in the UK have shown – along with countless cases of other Islamophobic incidents – British Muslims have disproportionately been victimised by hate crimes compared to other religious groups in the UK. In the US, meanwhile, far-right extremists have committed more acts of domestic terrorism than Islamists have since the 11 September 2001 terrorist attacks.

In the same vein, calls to limit Muslim immigration need to be contrasted with the fact that, like in other European countries, the British public tends to vastly overestimate the percentage of Muslims in the general population. A 2016 survey found that on average, British respondents estimated the Muslim population to be 15% – three times the actual figure of 5%, according to 2010 census data.

In terms of the purported failures of the criminal justice system, some context and nuance are also needed. First, it’s worth pointing out that Khan’s original conviction and prison sentence was not for actually committing a terror attack, but rather plotting to do so. To be sure, this is still a very serious crime. But eight years imprisonment seems less lenient when you consider that he’d never successfully caused harm to anyone. According to the British legal system, intent is certainly an important factor in sentencing – but so is outcome. Moreover, other criminals who have inflicted actual harm have, in some cases, received much shorter sentences.

Johnson’s pledge to end the system of early release for those convicted of terrorist offences, meanwhile, is simply a case of cheap political point-scoring. In an interview with Andrew Marr, he blamed the law that facilitated Khan’s early release on the previous Labour government of Tony Blair. Although Blair’s government did pass the Criminal Justice and Immigration Act 2008, which led to the practice of releasing prisoners after serving half their sentence, the then-Conservative opposition ultimately decided against thwarting the bill via a ‘division’ measure in parliament. In any case, Johnson’s Conservative Party, which has ruled for almost a decade now, never bothered to overturn the law – even when it had a parliamentary majority. So he can’t plausibly lay the blame solely with Labour or act like his party has been staunchly opposed to it.

Corbyn, on the other hand, refused to be browbeaten by the right-wing press into siding with Johnson’s reactionary kneejerk positions. He stayed firm, for example, on his support for prisoner rehabilitation since the attack. The fact that the perpetrator was on a rehabilitation course at the time of the crime has led to smug right-wing howls of ‘we told you so’. But for all of the facile smears, Corbyn’s position actually represents the more sensible, nuanced stance. After all, there is, in fact, ample evidence that certain kinds of rehabilitative interventions can be effective for some prisoners. And, of course, Johnson’s proposal would place even greater burden on the prison system, which is already severely overstretched and underfunded thanks to years of Tory austerity.

Likewise, Corbyn’s position on US foreign policy and the UK’s so-called ‘special relationship’ with the US is far more grounded in reality and good sense than Johnson’s lifelong flirtation with American neoconservatism. Corbyn’s post on Twitter that US foreign policy breeds hatred is simply a statement of fact that is supported by extensive polling data and academic research. And there is also plentiful evidence that the UK siding with the US in the disastrous wars in Iraq and Afghanistan has fuelled extremism both at home and abroad – a point so obvious that even Johnson himself once conceded it in a column at the Spectator.

The least courageous thing in the world…

Finally worth considering is the issue of ‘political correctness’. The idea that stressing the perpetrator’s Muslim background represents some kind of courageous risk is laughable. Far from being persecuted by an imaginary ‘liberal elite’ for pushing this narrative, those that do so are granted ample space in an overwhelmingly right-leaning mainstream press, receive invitations to prominent speaking venues, and are awarded lucrative positions at right-wing thinktanks (which are often swimming in donations from wealthy patrons like the Koch brothers).

Rather, it is independent media outlets like The Canary that take real risks by pushing back against such propaganda. And as the barrage of right-wing drivel generated from the London Bridge attack shows, the need to do so is now greater than ever.