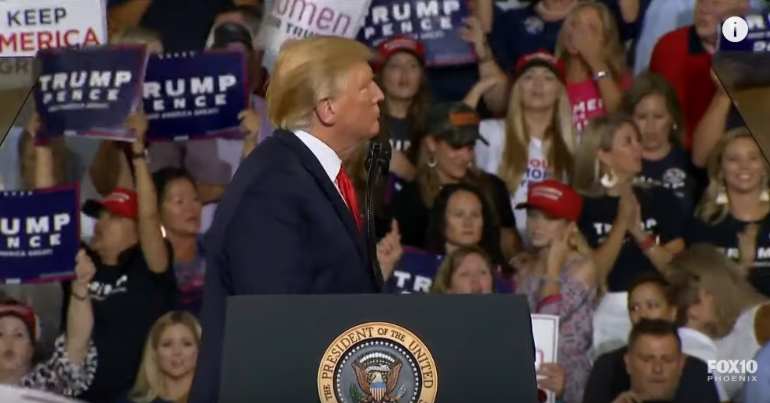 The start of 2020 has seen an escalation in tensions between the US and Iran not previously seen since the 1970s. These tensions culminated in a US airstrike in Baghdad that killed Iranian general Qasem Soleimani. As is typical of the Trump administration, US officials and Trump himself have oscillated wildly between different positions. At first, it seemed as if a US invasion was imminent, with anti-war groups issuing ominous warnings of the beginning of World War III. On 8 January, however, Trump appeared to backtrack, claiming that Tehran was “standing down” and claiming to welcome military de-escalation.

Though this development should be welcomed, taken as a whole the episode has exposed the emptiness of Trump’s anti-war sloganeering on the campaign trail in 2016. And as with all of his recent predecessors, the explanation is a simple one.

False posturing as the anti-war candidate

During his run for president, Trump (dubiously) positioned himself as a break from the ‘neoconservative’ orthodoxy of his own party by criticizing the 2003 invasion of Iraq. But after three years of his presidency, it has become crystal clear that his foreign policy is largely a continuation of the imperialist status quo that has been upheld for decades by both major US political parties.

The first signs that this would be the case were the people whom he picked for major foreign-policy positions within his administration. His first national security advisor Michael Flynn, for example, not only supported the invasion of Iraq but served as one of its major leaders. Things only got worse as Trump filled position after position with a who’s who of neoconservative warmongering. In April 2018, for instance, he appointed John Bolton, one of the architects of the invasion of Iraq during the George W Bush administration, as his new national security advisor.

Revival of the Monroe Doctrine

Perhaps the biggest target of US imperialist aggression under the Trump adminstration has been Latin America – which has suffered devastating US interference for many decades. In January 2019, for example, the Trump administration orchestrated a (so-far-unsuccessful) coup attempt against the democratically-elected government of Venezuela. His appointment of Elliott Abrams as ‘special envoy to Venezuela’ took things to a whole new level. Abrams is not only a notorious warhawk – who, along with Bolton, was another architect of the invasion of Iraq – but is also a convicted criminal for his involvement in the Iran-Contra scandal. He furthermore was involved with Ronald Reagan’s wars in Central America in the 1980s and helped the Nicaraguan Contra terrorist force by shipping them weapons disguised as ‘humanitarian aid’ – a tactic that some believe he attempted to replicate in Venezuela.

Bolton, meanwhile, declared Venezuela – along with Nicaragua and Cuba – to be part of a so-called ‘Troika of Tyranny’. As part of a new wave of hostility against them, the Trump administration walked back a number of the Obama-era renormalization steps with Cuba and imposed a new round of sanctions on the Sandinista government in Nicaragua. In April 2019, Bolton confirmed what everyone had long suspected – that the Monroe Doctrine, which formalized US domination of Latin America in the 19th Century – “is alive and well”.

The explanation for Trump’s apparently abrupt about-face on foreign policy as soon as he entered office is straightforward. Decades ago, the US government ceased to be a fully independent entity when it comes to formulating foreign policy. Rather, it acts in large part according to the interests of the military-industrial complex. As the decades have gone by, this has essentially morphed into a full-blown case of state capture. The US government acts in large part according to the dictates of what is profitable for the private arms and military-related industries within its borders. Specific geostrategic decisions, meanwhile, are largely decided according to what is in the economic interests of multinational corporations (the vast majority of which are based in the US or allied Western countries).

No one should be surprised, though. Because Trump’s entire campaign was a transparent con-job in which he cynically tapped into disaffection with the stale Washington status quo only to continue with more of the same once in power.

We must be clear: change will never come from the populist right. Only a genuine progressive left can offer a break from the imperialist neoliberal status quo of endless war.