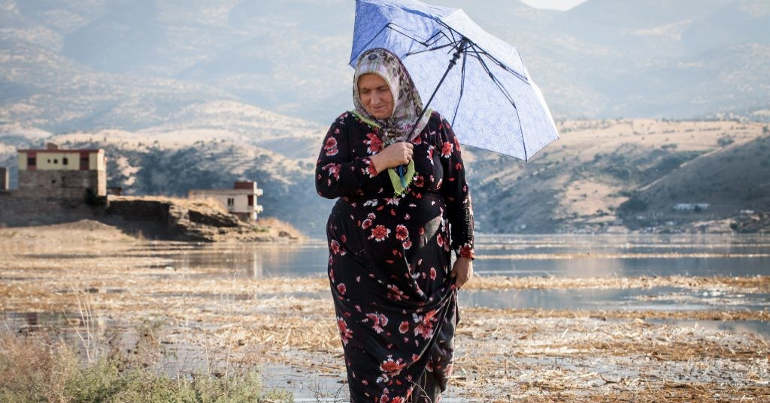 Turkey’s controversial Ilısu Dam project is nearing completion. And waters from the dam’s reservoir are threatening to displace at least 78,000 people.

The waters have now reached the ancient town of Hasankeyf in Turkey’s majority-Kurdish southeast. According to a statement from campaigners, quoted by independent Turkish press agency Bianet:

Engulfing 35 villages so far, Ilısu dam reservoir has reached Hasankeyf town, which is one of the most important cultural and natural heritage sites of the world.

12,000-year-old Hasankeyf has thousands of neolithic caves and hundreds of ancient monuments.

There has been a 20-year-long campaign to save the town of Hasankeyf and prevent the dam’s construction. The international movement even forced European banks to pull out of funding the project.

Pushing Kurdish-majority communities out of the countryside

The dam is part of the Southeastern Anatolia Project (GAP), which will produce hydroelectric power and generate water supplies. However, the GAP project has several underhand political aims too.

According to a report by Corporate Watch:

Officially, the Ilısu dam will provide hydro-electric power, but campaigners say there are more underhand reasons for the construction of the dam. One is to force Kurdish people out of rural areas and to assimilate them in cities. Kurdish people will be forced from the countryside to the cities in order to look for work. Turkey has attempted to assimilate Kurdish people for decades, trying to wipe out their cultures and their languages. According to Ercan [Ayboga] from the Initiative To Keep Hasankeyf Alive: “Assimilation is much easier to achieve within cities, where people speak less Kurdish and connections to traditional Kurdish culture are weaker.”

In June 2019, Eliza Egret wrote for The Canary:

The Turkish state has long been unrelenting in its plans to wipe out Kurdish culture. And in its latest move, it has vowed to begin filling a controversial dam within its borders on 10 June. This will see hundreds of majority-Kurdish villages submerged under water, literally wiping them from the map. The dam will displace roughly 78,000 people, as well as thousands of nomadic people.

Activists have been protesting the Ilısu dam for 20 years, stating that Turkey will be flooding the ‘cradle of civilisation’.

Another reason for the construction of the dam is to restrict the movement and effectiveness of Kurdish PKK guerillas. The building of new military forts on the mountaintops all around the dam also ensures that the Turkish military has more control over the area.

3) Water as a geopolitical weapon

Campaigners say that Turkey also intends to use the GAP project as a way to control water supplies to Iraq and Syria in order to increase its geopolitical influence. According to Joris Leverink in Roar Magazine:

The Euphrates and Tigris rivers both originate in Turkey, but whereas Ankara considers them to be a source of national wealth and an instrument for regional development, they are the very sources of life for its southern neighbors Syria and Iraq…

The finished GAP project will reduce water flows to Syria by 40 percent, and to Iraq by a shocking 80 percent. This, in combination with the severe droughts that have hit the region over the past few years… and the millions of (internally) displaced people in the region, has the potential to unleash an environmental and humanitarian catastrophe that could cause a serious food security problem, destabilizing the region for years to come.

Turkish president Erdoğan, widely considered a fascistic dictator, has continued with the construction of the dam despite international denunciation, withdrawal of support from numerous companies around the world, and the refusal of the World Bank to fund the project due to its controversy.

Erdoğan openly wishes to increase his power and recognises that water in Turkey is a resource he can wield as a weapon. We cannot allow history and life in all its forms to be obliterated by power-hungry, short-term-profit-driven, oppressive dictators.

We have no time to lose

According to a statement from the international initiative against the dam:

We can stop the doom that has unfolded in Tigris Valley despite all the destruction that has been brought about.

We are not tired of reiterating that it is never too late for Hasankeyf and Tigris River. No matter where we abandon the Ilısu Project, it will be to the benefit of us and next generations!

In 2019, groups more diverse than ever before stood up against Ilısu project and indicated that Hasankeyf had to be saved.

This reaction should be prompted again and the government should be requested to stop filling the Ilısu Dam. It is urgent, we have no time to lose.