We should be outraged that the police listed Extinction Rebellion as extremists. But we shouldn't be surprised. - Canary 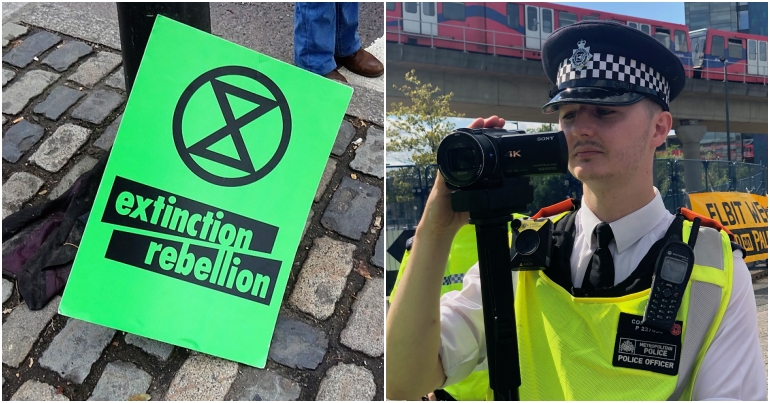 Environmental protest group Extinction Rebellion (XR) hit the headlines on 10 January after the police included it as an extremist ideology in its guide to “Safeguarding young people and adults from ideological extremism”.

But while it’s outrageous that a nonviolent group focussed on saving the planet from the climate crisis is listed as an extremist threat, we shouldn’t be surprised. Because this is exactly how the police treat protest groups. And any opposition to XR’s inclusion in this guide has to come from a place of solidarity with every other protest group listed as domestic extremists.

Revealed in the Guardian, the document is for people in “regular, direct contact with young people or members of the public”. And it is “designed to help you recognise when young people or adults may be vulnerable to extreme or violent ideologies”.

Alongside XR, the guide lists the proscribed groups National Action and Al Muhajiroun alongside “extreme satanism” and neo-Nazi groups. It also lists “animal rights extremism” as a threat – something which doesn’t generate the outrage groups like XR do. But it should.

Following the guide’s publication, it has been withdrawn. But as the Network for Police Monitoring pointed out:

They've said it has been withdrawn. Having campaigned on this issue for a decade, we do not believe this for a second https://t.co/Sqx5ptrg18

The role may also involve secretly labelling legitimate campaigning as "extremism" (based on no legal definition whatsoever) and then calling this an "error of judgement" when caught https://t.co/Rt2n2GJwIY

But what’s also important is the tone used in these sorts of documents. Because it makes it sounds like the Child Catcher is coming. Lock up your kids, folks. Those nasty people who want to save the planet are coming with big nets to take your children away.

In the section on XR, the guide states:

activists may encourage vulnerable people to perform acts of violence, or commit such acts themselves.

Meanwhile, in the animal rights section, it asserts:

This, quite frankly, is utter nonsense. I’ve been involved in protests since I was 14. No-one recruited me. No-one encouraged me to take action I didn’t want to. And in the 30 years since, I’ve never seen young or vulnerable people deliberately targeted or used to commit offences.

This is nothing new

But let’s not pretend this is shocking or anything new. In an article I wrote in 2018 about XR’s attitude to the police, I warned:

we’re living at a time when authorities view any disruptive protest as domestic extremism and police it with counter-terrorism strategy.

Those protesting fracking have regularly been presented as extremists in Prevent counter-terrorism training. Others have been referred to the Prevent programme because of their involvement with fracking protests. And in September 2019, the Guardian reported that a retired doctor was reported to Prevent over his involvement in XR.

This issue is much wider than XR. And anyone outraged at XR’s inclusion in this document also needs to be outraged at every single one of us who’s labelled a domestic extremist. I’m one of these people. According to my police files, my first entry on the domestic extremist database was in 1999 when I was arrested for trying to stop arms dealers travelling to a weapons fair. I know first hand the damage this label does and exactly why it should be abolished.

In June 2019, I was one of 152 politicians, lawyers, academics, journalists, and campaigners calling on the police to stop labelling protesters as domestic extremists.

The letter, organised by the Network for Police Monitoring (Netpol), stated that:

Categorising legitimate free speech and dissent as “domestic extremism” intimidates and alienates people from taking part in protest activities, restricting their ability to exercise their rights to freedom of assembly and association. This cannot continue.

And it called for:

a clear separation of protest policing from counter-terrorism and better protection for campaigners against surveillance, including independent oversight of how police use it in relation to political protest.

So let’s make sure that our outrage at XR’s inclusion in this document isn’t limited to one group. Netpol is running a campaign with three clear demands:

The police must stop categorising campaigning and protest activities as ‘extremism’.
Protesters and campaigners must have better protection against routine surveillance.
The policing of protest should be clearly separated from the policing of terrorism and extremism.

Get behind this campaign. And let’s make sure we act in solidarity with each other. Those involved in XR are not domestic extremists. But neither are those of us who campaign against animal testing, fracking, or the arms trade. And standing in solidarity with each other is the best way we have of showing the police that we will not tolerate any of us being smeared as extremists.