At first I couldn't stop laughing at the cops' counter-terror list. But I stopped because it's utterly sinister. - Canary 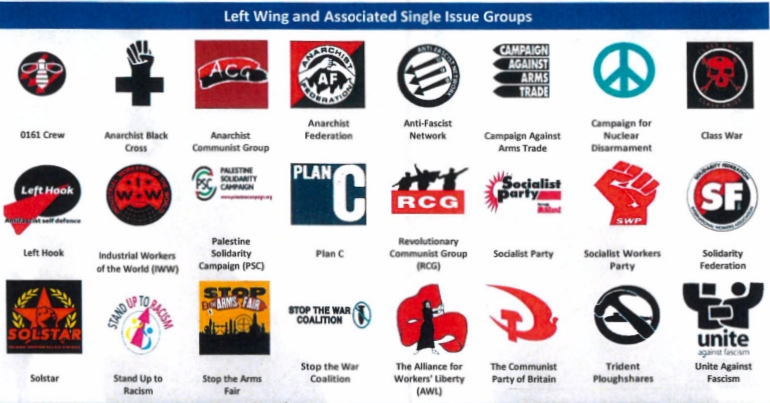 On 17 January, the Guardian revealed a counter-terrorism document listing a variety of protest and left-wing groups alongside neo-Nazis and the far-right and their associated symbols.

My first reaction to it was laughter and piss-taking. The list contains groups from Campaign Against Arms Trade (CAAT) to Greenpeace and Animal Aid. It’s also woefully out-of-date. It’s as if someone has taken a roll call of groups from ten years ago and added Extinction Rebellion (XR) to the list.

It also contains a group I co-founded – Fitwatch – an anti-police surveillance group. I never even knew we had a logo – nevermind the fact we haven’t been active for several years.

Literally the bingo I – and many of my friends – can play with this list is ridiculous. I did wonder if we could get prizes for being so-called ‘uber terrorists’ depending on how many boxes we ticked. But then I realised that I already possessed that dubious award – and it’s why I’ve suffered so much police harassment over the years.

And then I stopped laughing. Because actually the document is utterly sinister and goes much further than others we’ve previously seen.

Outraged but not shocked

As I previously argued in The Canary about XR’s inclusion as extremist in another document, we should be outraged, but we shouldn’t be surprised.

And this still stands with the most recent document. After all, protest policing comes under the umbrella of counter-terror policing. Meanwhile, a large number of the groups that appear on this list were also spied on by undercover cops. So we really shouldn’t be surprised that this is how the police view protest.

As Andrew Smith from CAAT stated:

Political policing has been a major problem, and this document takes things to a whole new level.

CAAT has long been subject to political policing. In 2009, its then-press coordinator, Andrew Wood, won a case against the Metropolitan Police for repeatedly taking his photograph and following him after an AGM of the company organising the London arms fair. Lord Mapesbury described the case as having:

a chilling effect on on the exercise of lawful rights

What’s particularly outrageous about this list, and other such Prevent-related documents, is how widely they’re disseminated. This one, as the Guardian reported:

was sent to doctors, schools and safeguarding children boards as a resource for practitioners of Prevent.

It also stated that the police said it was:

a guide to help them identify and understand the range of organisations they might come across” and should not be viewed as suggesting that membership of “non-proscribed groups would be sufficient to trigger a Prevent referral”.

However, this is totally at odds with the fact that the guide also includes a number to call to “report concerns identified via this document”.

Every progressive group included in this list needs to act in solidarity with each other. And it’s essential that we don’t fall into the trap of ‘good’ and ‘bad’ protesters. None of these groups belongs on a counter-terror list. Whether it’s environmental and peace groups, anarchists, animal rights activists or people who support the Kurdish freedom movement – none of us are terrorists. And none of these groups should appear on such a list. And just as important, is acting in solidarity with Muslim communities who are frequently targeted by the government’s Islamophobic Prevent strategy.

Every person affected by this list should support the Network for Police Monitoring’s campaign to stop labelling campaigners as domestic extremists. Campaigners should not face counter-terrorism policing and protest groups have no place in Prevent or safeguarding materials.

Campaigners are not extremists and they are certainly not terrorists. But this perception won’t change unless we all start fighting back against political policing.