On Holocaust Remembrance Day, some MPs should hang their heads in shame - Canary 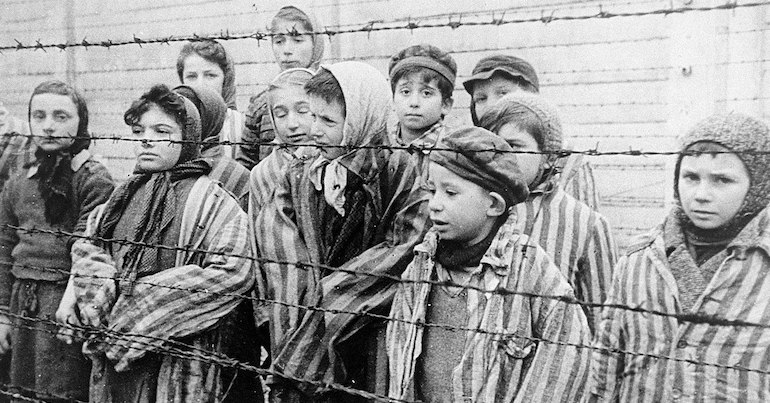 27 January is Holocaust Remembrance Day. In 2020, this is even more poignant because it also honours the 75th anniversary since the liberation of Auschwitz-Birkenau. But as people around the world remember the victims and remaining survivors of this and all genocides, some UK MPs should hang their heads in shame.

Their hypocrisy is utterly disgusting. Because today, we know how vitally important it is to learn from the horrors of the past. Yet just last week, Boris Johnson’s government voted down Lord Alf Dubs’s amendment to help child refugees. Have they forgotten how many people whom the Nazis swept into concentration camps were also refugees? Have they also forgotten that, without Kindertransport helping child refugees reach safety, Dubs and thousands of other children probably wouldn’t have survived?

“We have a shared responsibility to fight these evils”

A statement from the Holocaust Memorial Day Trust (HMDT) explains that “the Holocaust shook the foundations of modern civilisation”. Because of the “unprecedented character and horror”, it “will always hold universal meaning”. As a result, it pledges to ensure:

that future generations understand the causes of the Holocaust and reflect upon its consequences. We vow to remember the victims of Nazi persecution and of all genocides…

We recognise that humanity is still scarred by the belief that race, religion, disability or sexuality make some people’s lives worth less than others’. Genocide, antisemitism, racism, xenophobia and discrimination still continue.

Many people shared stark reminders of what ‘Holocaust’ truly means:

Today is #HolocaustMemorialDay
If we held 1 minute of silence for every victim we would be silent for 11.5 years. pic.twitter.com/SzTTxJLJ8g

‘Monsters exist, but they are too few in number to be truly dangerous. More dangerous are the common men, the functionaries ready to believe and to act without asking questions.’

The HMDT statement also points to our “shared responsibility to fight these evils” and to “condemn the evils of prejudice, discrimination and racism”.

These principles are impossible to argue with. Unless, it seems, you’re a Tory minister or MP.

Many people also pointed out that there are still vital lessons to be learned from the Holocaust:

While we are busy remembering and weaponising let's accept the actual lesson of the Nazis Holocaust have yet to be learned pic.twitter.com/C16g5TzlwO

If you are an MP who voted last week to prevent #ChildRefugess from coming to the UK please make sure that you are not hypocritical enough to post anything about #HolocaustMemorialDay.

It was actions like yours that mean we need a memorial day.

us that… those trying to escape nazi genocide were, first and foremost, refugees — at a time when one of them, Labour peer Alf Dubs who came here via Kinder Transport aged six, has seen the Tories vote down his Brexit Bill amendment to unite displaced children with their parents.

In the 1930s, Kindertransport enabled “about 10,000 mainly Jewish children” to escape from the Nazis. Dubs came to the UK as a child refugee and has championed refugee children’s rights ever since.

On 8 January, Johnson’s government repealed a later amendment seeking to at least protect basic rights for unaccompanied child refugees. Although the Lords voted against this, the Tory government pushed it through.

It is bitterly disappointing that after a victory in the Lords the government have voted down my amendment in the Commons. What could be more humane than asking that unaccompanied child refugees stranded in Europe be able to join relatives in this country? https://t.co/XiwoY0FIiz

So it seems utterly beyond belief that Johnson, Priti Patel, Dominic Raab, and many Tory MPs honoured Holocaust Remembrance Day. They fail, it seems, to see their disgusting hypocrisy. They also miss the abyss between doing so and pushing forward policy to stop child refugees seeking safety.

the sacrifices of those who have risked their lives to protect or rescue victims, as a touchstone of the human capacity for good in the face of evil.

Can Tory MPs who voted down child refugee rights really claim to stand for these values?

In 2003, I was humbled and fortunate enough to meet an Auschwitz survivor. She shared her story with a group of trainee teachers and I’ve never forgotten her words or what she entrusted us to do.

“Please,” she said, “make sure that no one ever forgets. Share our story because when we’re gone, we need the children of the future to know and to make sure this can never happen again.” I took those words to heart, and passed them on to every class of children I taught.

In 2003, any sense of a ‘refugee crisis’ seemed far from our shores. Before the conflict in Syria, it was something many people in the UK failed to comprehend fully. But that’s changed.

my relatives were refugees — a lot like the people you may have seen on the news recently. …

I see thousands of families that have been forced to run from new wars, driven into hiding and sometimes losing their lives.

Today of all days, we can’t ignore the critical global refugee crisis. So I still carry the legacy of those words I heard.

Each and every refugee flees atrocities. The horror of genocide is still with us. Does scale or number mitigate the severity of genocide anywhere? When you’re humbled by the presence of someone sharing a first-hand account of genocide, you recognise that no – it doesn’t.

First, they came for…

It’s both chilling and deeply upsetting to see Tory ministers offering ‘sympathy’ on Holocaust Remembrance Day. Because today, I honour and remember Jewish people and all other Holocaust victims: disabled people, gay people, Gypsies and Roma, indeed anyone who dared to speak out.

This government destroyed the remaining fragments of child refugee rights. But we can’t ignore 10 years of hideous discrimination against disabled people. Johnson’s government also promised new legislation to erode what should be basic rights. Police powers creep daily to limit our rights to gather, protest or challenge authority. And speaking as a member of the Travelling community, we know they’re coming after us now too.

Where does this end?

The answer is too chilling to even think about. We can’t and we won’t forget how the creep of dictatorship and fascism starts. So it’s up to us to take a stand against this government with everything we have.