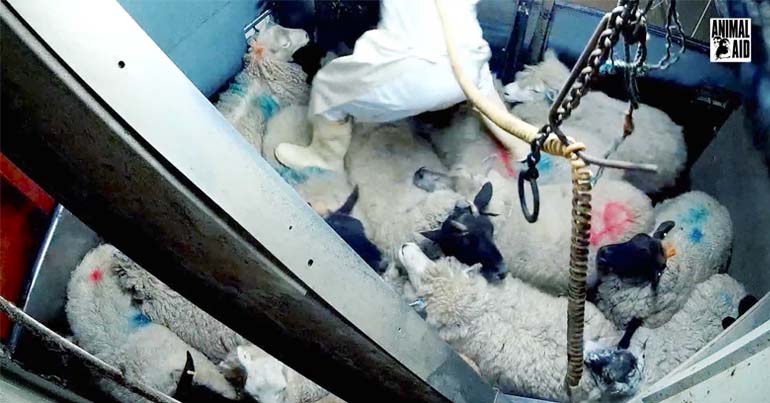 A judge in Kent dismissed an animal cruelty case in January over concerns about the way evidence was gained. The Telegraph then ran an article on 29 February containing a call for laws on covert filming to be tightened. But it’s no surprise that the call was made by pro-bloodsports group the Countryside Alliance.

Animal rights group Animal Aid filmed acts of cruelty at Forge Farm Meats in Tunbridge Wells, Kent, and handed the footage over to the Food Standards Agency (FSA). In October 2018, the company was charged with 14 counts of breaking animal welfare regulations. Courts also charged two of its employees for failing to properly stun sheep before they were killed. But on 20 January 2020, Animal Aid said that the case had been dropped. And in a 25 January article by KentLive, Forge Farm Meats director Stephen Bailey said the case had been dismissed because of “how [footage] had been obtained”. KentLive said Bailey claimed:

the footage was dismissed on grounds of “breaking and entering, causing criminal damage and burglary”, with the judge adding: “Well you’ve done all three.”

On 29 February, the Telegraph followed up the collapse of this case with calls for tighter regulations on undercover footage. In an article titled Prosecutors ‘encouraging animal right activists to break the law’, the paper said that:

Campaign groups are now calling for covert footage to be used only if it is authorised in advance under strict rules that have to be followed by the police, security services and other investigating bodies such as councils.

However, it quoted just one ‘campaign group’ – the Countryside Alliance. Tim Bonner, chief executive of the organisation, said “authorities [such as the CPS] should not be accepting” evidence gained without “prior RIPA authorisation”. RIPA – the Regulation of Investigatory Powers Act 2000 – governs how public bodies including the police, intelligence services and local government conduct covert surveillance. However, as the Telegraph notes, non-public bodies such as activist groups and investigative journalists have “no obligation” to go through the RIPA process.

Bonner went on to say that, because the CPS accepts covert footage gained without RIPA authorisation, it’s “encouraging people… to commit crimes and breach people’s privacy”.

The successes of covert filming

Animal rights campaigners have used undercover filming for campaigning and prosecution purposes for decades. The approach has led to several important convictions in recent years. Covert footage by the Hunt Investigation Team, for example, led to the conviction of four hunt members for animal cruelty in June 2019. Cameras caught them feeding live fox cubs to hunting hounds. And a court convicted two members of the Kimblewick Hunt for animal cruelty in November 2019 based on footage by the Covert Film Unit.

Undercover footage by People for the Ethical Treatment of Animals (PETA) led to a Scottish sheep farmer pleading guilty to animal cruelty charges on 24 February 2020. The film showed William Brown “violently punching” two sheep. And by January 2019, Lincolnshire courts had convicted three people of animal cruelty to pigs based on covert filming by Animal Equality UK.

These don’t include exposés that didn’t make it to court but nonetheless revealed cruel, inhumane treatment of animals across the UK. An activist with Meat The Victims, for example, exposed such desperate conditions at a pig farm in the north of Ireland that pigs were cannibalising each other. And hunt saboteurs revealed a mass grave of pheasants in January 2019, describing it as “one of the shooting industry’s dark secrets”.

It’s not just animal rights campaigners using covert surveillance to gather evidence of ethically reprehensible and criminal behaviour. This is an essential tool for investigative journalism. One case that bridges these two areas is a BBC investigation into badger baiting. A journalist for BBC Wales used hidden cameras to capture a group of men engaged in the criminal act of badger baiting. Courts convicted four men on the back of this footage. Journalists have also used it to gain evidence of cruelty and malpractice in wide-ranging scenarios such as the NHS, Amazon, benefits assessments, and even the Cambridge Analytica scandal.

If Bonner’s call for all such footage to first pass through RIPA authorisation was heeded, the impact would be immeasurable. It effectively hands judgement about what is ‘worth’ investigating back to state authorities, who have shown themselves to be woefully inadequate at best and actively hostile at worst. As a result, the impact of such irresponsible changes could also massively damage human rights and social justice issues.

So what might lurk beneath the surface of Bonner’s attempt to disrupt animal rights activists? After 15 years of threatening a repeal on the Hunting Act, it’s finally looking as though any government won’t repeal the ban. Even Johnson’s cabinet accept this as a given now:

Instead, it appears the hunting community will seek to make life harder for hunt saboteurs and other animal rights activists. This can be seen in the Countryside Alliance’s hijacking of the debate over criminalisation of trespass. The Tory’s proposals affect trespass to establish encampments, and will impact Gypsy, Roma and Traveller communities most of all. But the Countryside Alliance is attempting to co-opt public discussion to include sabs, who it claims are committing aggravated trespass “with impunity”.

Its latest attempt to steer legislation, by linking covert filming by animal rights groups with criminal damage and invasion of privacy, is utterly disingenuous. Huge numbers of films over decades shows that cruelty is baked into the heart of the factory farming and bloodsports industries. Preventing people from exposing these horrors amounts to little more than defending animal abuse.