A serious flaw in the US extradition case against Julian Assange has been exposed by lawyers representing the WikiLeaks founder. Consequently, the defence has called for the extradition to be denied.

In the course of the proceedings, the defence also revealed more “bombshells”, including how witnesses will be called to back up claims of direct political interference by the US government in the extradition process.

At the extradition hearing, Edward Fitzgerald QC for the defence referred to a submission to the court, which quoted from the 2003 US-UK extradition treaty (ratified in 2007):

The submission referred to a number of cases where it was successfully shown that extradition was denied because the offence, including the charge of espionage, was considered political.

To back up their claim that Assange’s activities are political, the defence quoted US secretary of state Mike Pompeo’s famous description that goes:

Even computer misuse, as alleged by the US, in this context could be seen as a political offence. And to provide further clarity, the defence showed how the House of Lords specified that it is:

not necessary for the defendant [in such cases] to be seeking political power, or the overthrow of government

The submission concluded that the court should dismiss the extradition request.

Prosecutor James Lewis QC argued in response that the 2003 UK Extradition Act overrides the US-UK Treaty and so defence claims in regard to the political nature of the alleged offences are invalid.

However, the 2003 UK Extradition Act says that:

A person’s extradition to a category 2 territory [USA] is barred by reason of extraneous considerations if (and only if) it appears that… if extradited he might be prejudiced at his trial or punished, detained or restricted in his personal liberty by reason of his race, religion, nationality, gender, sexual orientation or political opinions.

Via a further submission the defence responded by further arguing:

it would be an abuse of process to extradite Mr. Assange in reliance on the very treaty [US-UK extradition] which governs the legality of his extradition whilst disregarding a major protection contained in that treaty, namely the protection against extradition for a political offence.

In other words, the prosecution has to take full account of that protection listed in the treaty, or not proceed further with the case.

Wikileaks editor-in-chief Kristinn Hrafnsson later added that it’s “bizarre” for the prosecution to rely on the US-UK treaty for the extradition request but then not apply it as a whole:

Editor in Chief of @WikiLeaks, @khrafnsson summarises the morning #AssangeHearing “It’s bizarre to hear that you’re basing your case on a treaty but that the provisions on that treaty do not apply”.#DontExtraditeAssange #FreeAssange #CoronaVirusUpdates pic.twitter.com/JuEsgqF5I3

There were more submissions by the defence, arguing why the extradition is political. Namely, because of the direct involvement of US president Donald Trump.

For example, during the ongoing trial in Spain of UC Global head David Morales, it was shown how surveillance material on the Ecuadorian embassy in London was allegedly passed to the CIA via casino billionaire Sheldon Adelson, a close associate and donor of Trump. The surveillance operations included spying on Assange’s privileged conversations with his legal representatives.

It is one of the most fundamental principles of protecting attorney-client relationships that we are able to have confidential and private meetings, to discuss legal strategy.

In the extradition proceedings, defence referred to “Witness #2”, a whistleblower who worked for UC Global and who, according to Shadowproof, revealed that:

data was collected and uploaded daily to a remote server. That information was accessed by U.S. intelligence. Original recordings, including sound, were collected from several microphones every 14 days.

The witness also claimed there was talk about poisoning or kidnapping Assange.

The Council of Bar and Law Societies of Europe, representing over one million lawyers, has issued a letter to UK home secretary Priti Patel. The Council points out that the surveillance on Assange and his visitors equated to a serious breach of client-lawyer confidentiality, as well as other concerns:

Letter from The Council of Bar and Law Societies of Europe (CCBE) to UK authorities about the interception of communications between Julian Assange and his lawyers @wikileaks @DefendAssange @AssangeLegal pic.twitter.com/hljFK7gW8J

Indeed, the law in England on client-lawyer confidentiality is clear, as indicated by a 2018 judgement in the Court of Appeal.

But that’s not all. In August 2017, there was a meeting between Assange and Republican representative Dana Rohrabacher. At that meeting, Trump reportedly said he’d offer Assange a pardon if he provided evidence that Russia did not hack the DNC emails. Assange’s lawyer Jennifer Robinson subsequently confirmed this.

Shadowproof reported that Fitzgerald QC told the court that Trump denied this, adding:

But in the immortal words of Mandy Rice Davies [witness at the Stephen Ward trial]: ‘Well he would, wouldn’t he?’.

We say that this whole pardon business shows that, just as the prosecution was initiated in December 2017 for political purposes, so too the Trump administration [was] prepared to use the threat of prosecution as a means of extortion to obtain personal political advantage from Mr. Assange.

Krstinn Hrafnsson (@khrafnsson) Editor-In-Chief at WikiLeaks sets the record straight on the significance of the Rohrabacher-#Assange "pardon offer" discussion and how the mainstream press have not reported on correctly. pic.twitter.com/kA7PSJ9vwX

This also adds further to the argument that the extradition is political.

And there’s more to support that argument.

Journalist Cassandra Fairbanks has published details of phone calls between her and Arthur Schwartz, an associate of newly appointed US acting head of intelligence Richard Grenell.

It’s alleged Grenell promised Ecuador that if it allowed Assange to be taken from the Ecuadorian embassy then no death penalty would be applied against the WikiLeaks founder. In regard to that, Fairbanks claims that in one phone call between her and Schwartz the latter says that Grenell was: “taking orders from the president”:

Another significant issue the defence raised at the extradition hearing was in regard to the accusation that the publication by WikiLeaks of documents leaked by whistleblower Chelsea Manning put lives at risk. Manning leaked hundreds of thousands of documents relating to, for example, the US invasion of Iraq, the Afghanistan conflict, and of US war crimes. The same accusation was made at Manning’s court-martial, but, importantly, it was dismissed after evidence submitted by US counter-intelligence official Robert Carr.

Defense refers to Chelsea Manning’s plea statement. This is the key statement she made about her disclosures, which prosecutors desperately want to undermine. This is part of why she was subpoenaed to appear before grand jury and is still in jail. #Assange

At the extradition hearing, the defence pointed out that WikiLeaks had a “Harm Mitigation Program”, which was used to redact names from leaked documents prior to publication. But this process was jeopardised when Guardian journalist David Leigh published the password to the US cables in a book: 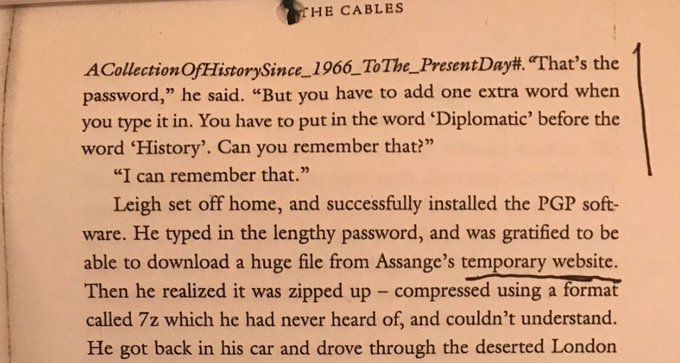 Once Assange became aware of this he contacted the US authorities to warn them:

Defense outlines chronology of what happened after Harding and Leigh published password to unredacted cables. Assange called US State Department. “I don’t understand why you’re not seeing the urgency of this. Unless we do something, then people’s lives are at risk.”

Former editor of Bureau of Investigative Journalism Iain Overton confirmed there was a redaction process:

I worked closely with Assange when editor of Bureau of Investigative Journalism on the Iraq War Logs. This claim absolutely false when it applies to that. We went to great lengths to redact names, protect identities. This is an assault on whistleblowing.https://t.co/pZjquH8oAA

In the first indictment issued by the United States, it is claimed that Assange “conspired to access a computer without authorization”. It is also implied that Assange assisted Manning to crack a password. In response, the defence made it clear that Manning didn’t need help as she had full access to the files:

Meanwhile, rather than sit behind a bulletproof glass encased dock, Assange has asked that he accompany his defence team, which would mean he could communicate more easily with his lawyers. But his request was rejected:

#JulianAssange's lawyer @suigenerisjen gives a final recap of the #AssangeHearing week's proceedings: "Mr. #Assange has had significant difficulties in participating with these proceedings… the Judge has refused him to leave the dock an sit with his lawyers." #AssangeCase pic.twitter.com/VUsEIssuGh

The defence also complained about the treatment of their client on his journey to and from court, which included seizure by prison staff of his legal files. Fitzgerald told the judge:

Yesterday Mr. Assange was handcuffed 11 times, he was stripped naked two times at Belmarsh, and was put in five separate holding cells.

After a couple of administrative sessions in March and April, the extradition hearing will resume on 18 May and is expected to continue for at least three weeks.

Once proceedings resume, the prosecution must accept that the US-UK treaty has to be applied as a whole and that includes the provision that bars extradition because of the political nature of a defendant’s activities. Otherwise, the treaty is irrelevant and, therefore, the case can no longer proceed.

It’s obvious that this has always been about politics and persecution. It’s time to end the absurdity.