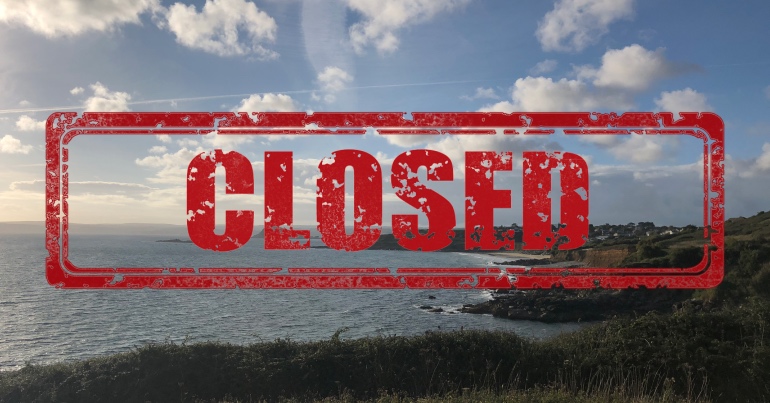 CORRECTION: This article was updated at 11.20am on 24 March to remove an image on request.

Anger is mounting across Cornwall as increasing reports come in of people fleeing to the region to escape the coronavirus (Covid-19). Local people are noticing rising numbers of second homeowners and tourists arriving. Meanwhile, some holiday parks remain open, some rental agencies are refusing refunds and irresponsible holiday rental listings are advertising Cornwall as a place to self-isolate.

Cornish residents, including the author, a Tory MP, and the local council all have one simple request. Please don’t. Please stay at home. Self-isolate there. Do not come here.

We have one hospital. Coming to Cornwall is risking lives.

Put simply, anyone coming to Cornwall – whether to self-isolate or because they think it’s safer – is behaving selfishly and irresponsibly. Those advertising accommodation at extortionate rates, meanwhile, are beyond contempt.

For several days, the number of cases in Cornwall remained at ten. On 20 March, this figure jumped to 16. Local residents fear this number will keep growing as more people arrive.

The NHS in Cornwall cannot cope with additional people. Before the coronavirus pandemic broke in the UK, our one major hospital was at breaking point. On 3 January, the BBC reported Royal Cornwall Hospital was taking the “unprecedented” move of turning away people with minor injuries and the hospital stated that:

This is the only critical care unit we have and that unit only has 15 beds. According to the Telegraph, the situation is the same across the southwest:

The south west looks most vulnerable in terms of ratios. It has the oldest population (so highest expected mortality) and lowest number of critical care beds per head of population. The modelling suggests it needs six times more than currently exists there (600 per cent).

Meanwhile, for those ‘escaping’ London, the paper reported:

Regionally, it looks like London is best positioned to weather the epidemic, although it too will come under immense pressure.

A holiday is not essential travel

Conservative MP Steve Double was one of many people encouraging people not to travel. Double stated that:

By anyone’s assessment a holiday at this time is not essential.

Along with Cllr Julian German, Leader of @CornwallCouncil, I have written an open letter to people considering coming on holiday to #Cornwall in the coming days. #Covid_19 pic.twitter.com/QPuNsG9NVj

Please please please don’t come to #Cornwall. We don’t have the resources for us, let along you… pic.twitter.com/f1N2VXfwLN

Locals, meanwhile, are reporting that people are already arriving. One local business owner in Penzance told me that it’s too late, that they’ve had an influx of second homeowners stocking up. They weren’t even glad of the business. They just wanted them to stay away. Other locals have also noticed the increased population, reporting increased numbers in villages, and many commenting that, population-wise, it feels more like a bank holiday.

But many holiday lets are seemingly willing to put profit over people’s lives. One advert on Gumtree, seen by The Canary but now removed, boasted of the fact Cornwall only had ten cases, and wanted to charge £4,295 for the month.

Another advert on Gumtree, still live at the time of writing, is advertising accommodation that sleeps 15 and costs £1,000 a week: 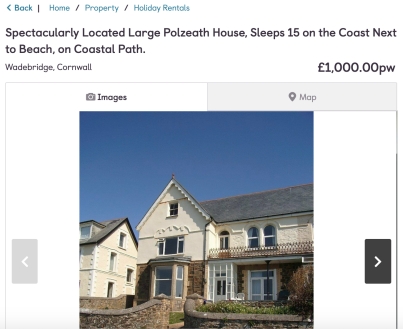 Figures from 2017 show that one in twenty properties in the region is classed as a second home. Cornwall Live reported on the “staggering” numbers:

Official government figures show that 13,767 dwellings in our county were classed as “second homes” for council tax purposes as of October 2017.

It shows that in 2017/18 3,510 properties were sold as additional dwellings in Cornwall which is 27% of all properties sold.

These homeowners have already pushed up property prices to levels most local people can’t afford. And as Cornwall Stuff, highlighted there’s a:

loophole whereby some second home owners are avoiding paying council tax or business rates on their properties by registering them as businesses but below the threshold for business rates to apply.

But not all owners of holiday lets were behaving irresponsibly. Landal Gwel an Mor Luxury Lodges, for example, is offering free accommodation for NHS staff: 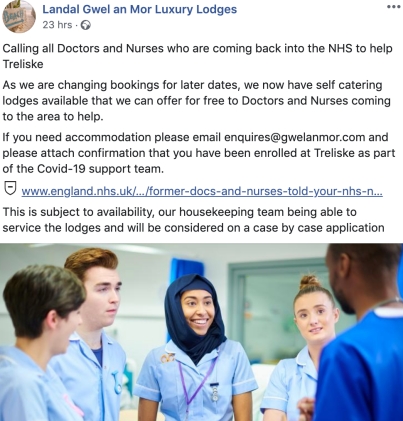 And other places have announced they are temporarily closed while others are refusing bookings.

Twitter users made their views clear to anyone thinking of coming down here:

If you are in a busy area, thinking of taking your family away to Cornwall or another second home retreat take note of the fact you might be taking disease to places with low infection rates. STOP AND THINK#Covid_19 #DontBeASpreader

If anyone is thinking “let’s escape to Cornwall” PLEASE DON’T. Our hospital is already full and shops are empty and if everyone descends on our beaches for socially distant walks they will ban us from doing so. #cornwall

One former Cornish resident living in London compared the situation to “hoarding”:

It’s similar to hoarding – stop only thinking about yourselves. I’m a Londoner whose parents are in Cornwall and I grew up there. It would be incredibly wrong of me to go there, though, hence my brother and I cancelling our Easter plans there in case we infect our parents!

And it’s not just Cornwall. Other holiday destinations, such as those in Wales, are experiencing similar problems.

What part of #StayHomeSaveLives do people not understand?
In my little village in North Wales today, we're inundated with tourists who are buying up whatever they can lay their hands on from our tiny Spar & butchers. We have many elderly here and no public transport. I'm fuming.

And there are fears that what happened in Italy could happen in Cornwall and other rural places. On 21 March, the coronavirus death toll in Italy “rose by 793 to 4,825”. One Italian resident, Nadia Dixon, told The Canary:

Here in Aosta we got most of the virus from holiday makers coming to ski from Milan the Saturday and Sunday before lockdown. Then they shut the ski resorts. Now the people getting ill are the people who live in ski resorts, ski instructors, waiters, hotel workers etc…it spreads so easily.

You won’t be welcome, just stay away!

Cornwall is normally a welcoming place. But speaking to locals, including friends and family, one thing is abundantly clear, you will not be welcomed. You will not feel that warmth. We do not want you here. You are risking the lives of our families and our loved ones because of your selfish actions. It is that simple.

This is also a class issue. Cornwall is one of the most deprived places in Europe. The people who live here can’t afford to buy houses, we can’t afford the price of holiday rentals, especially in the current climate. This is about people with money escaping to a place full of poor and vulnerable people, spreading the virus and stretching our resources to capacity.

So no, this isn’t xenophobia, as some people posting about this have been accused of. This isn’t the same as saying, for example, that refugees aren’t welcome. This is about an exodus of the wealthy endangering lives.