A storm is brewing over the Labour leadership race - Canary 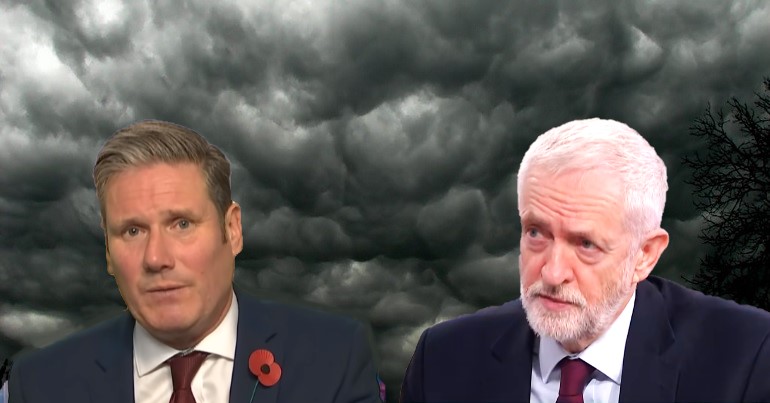 Despite the coronavirus (Covid-19) pandemic, the Labour Party leadership election is going ahead. But a growing number of people are calling for the party to suspend it. And they’re also saying outgoing leader Jeremy Corbyn should remain in the job.

Voting is still open in the contest, which has been running since January. It’s nearing the finish line, with the ballot closing on 2 April. The party will announce the result on 4 April. Currently, shadow Brexit secretary Keir Starmer is the bookies’ favourite, followed by shadow business secretary Rebecca Long-Bailey.

But a growing number of people are starting to ask whether the contest should continue. Many believe that its makes sense to keep Corbyn where he is. As Rachael Swindon tweeted:

I still believe Jeremy Corbyn is the best person to lead us in the short term. The leadership contest should be postponed. We are in unprecedented times, and we need to work together. #Covid_19 #YNWA pic.twitter.com/T7rayIQVTs

We are ALL going through enough change without adding a new leader to it#CancelLabourLeaderElectionhttps://t.co/UKwLSRC8or

It has become clear that the COVID-19 pandemic is a crisis unlike any this nation has confronted in at least a generation. It is a crisis that demands the full attention of the party’s membership, the labour movement, PLP and party bureaucracy.

The petition goes on to state that the leadership campaigns have “ground to a halt” because of coronavirus. And it says that “now is not the time” for a complete change in leadership and shadow cabinet. It calls on the party to:

work together to hold the government of Boris Johnson to account. We do not have the luxury of retreating into an inward-looking debate among ourselves. Over the coming months, we must work together, as a party, to fight for our communities.

So, people have started the hashtag #CorbynMustStay:

Jeremy Corbyn on #Ridge this morning 'The rate of testing we're doing in this country is far too low'.

But where even is Johnson? Is he having the weekend off? Johnson must go.

Jeremy Corbyn as ever focusing on ALL of us. As ever too the most vulnerable are at the top of his agenda.

He rightly points out that much of what the govt is doing now is what he & Labour were condemned for during the general election. #CorbynMustStay #Ridge pic.twitter.com/rjdkvD2XfP

So far, Corbyn has shown measured and sensible leadership, coupled with effective opposition, during the pandemic.

As The Canary previously reported, on 14 March Corbyn wrote to Boris Johnson. He was calling on the government to introduce various measures to lessen the impact of coronavirus. These include things like statutory sick pay from day one for workers and stopping appointments for Universal Credit. Lo and behold a few days later the government introduced both these things.

Moreover, Corbyn has been on-point at Prime Minister’s Questions (PMQs). On 18 March he was at, what was in theory, his last one. And he said of the Tory government:

Generations to come will look back on this moment and they will judge us – judge us on the actions that we take now. Our response must be bold, and it must be decisive. The market cannot deliver what is needed. Only collective public action led by government can protect our people and our society.

And he made the important point that:

collective action must not allow… the burden to fall most on those who lack the resources to cope, as happened after the financial crash.

Then, on Saturday 21 March he wrote to Johnson again, this time over the government’s latest plans:

Boris Johnson should provide economic security for everyone to get through this.

That means much more help for the self-employed, renters and workers, improved social security and an increase in sick pay, which the Health Secretary has admitted isn't currently enough to live on. pic.twitter.com/24FxgRZMjr

With just days left under his leadership, Corbyn is still pushing the government as hard as he can.

Working for us all

So far, his timely and considered words appear to have fallen on deaf government ears. But the fact that he delivered an eminently proportionate and egalitarian message, coupled with the party’s sensible response to coronavirus, shows why he should stay in place. People on social media are right. Given the catastrophic response of the Tory government up to this point, the country needs an opposition leader who will act in all our interests. And one who is experienced in holding the government to account. That person, right now, is Corbyn. Not Starmer, Long-Bailey or anyone else.