Trump got thrown a 'softball question' about coronavirus. His response was unforgivable. - Canary 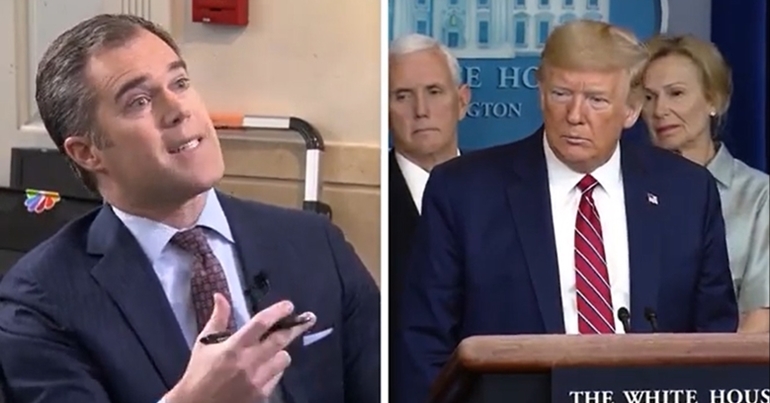 On 20 March, US president Donald Trump gave a press conference at the White House on the new coronavirus (Covid-19) pandemic. And during the conference, NBC reporter Peter Alexander asked Trump:

Is it possible that your impulse to put a positive spin on things may be giving Americans a false sense of hope?

In pushing Trump for an answer for the American people, Alexander may have been conscious that one of his NBC colleagues died recently as a result of the virus.

Later in the press conference, Alexander asked the president:

And as Vanity Fair reported, this was a “softball question”. So all Trump had to do was give a simple answer. But instead, he attacked Alexander, saying:

Q: What do you say to Americans who are scared

TRUMP: "I say that you're a terrible reporter, that's what I say."

Trump followed up by saying: “I think that’s a very nasty question”.

Pretty soon after this, people took to social media to express their disgust at Trump’s baseless attack:

You asked a great question. And you’re an excellent reporter. Trump is a dangerous, incompetent monster.

Peter Alexander throws @realDonaldTrump a softball question. trump could have so easily acted presidential. Instead he embarrasses himself with a rage filled whiff!

The crazy thing is, it's such a softball question. It gives him the opportunity to comfort those who are afraid and this is how he reacts?!

And filmmaker Nikyatu Jusu was enraged by Trump’s reaction:

How do these “people” behind trump keep a poker face? All these cretins have sold their soul to the devil. pic.twitter.com/MEgXyqPZwe

So the scientist has to step in

Reporters were also unhappy with Trump’s response. Indeed, one journalist asked for Trump’s scientist Dr Fauci to step in and take questions. That reporter then asked Fauci to follow up on Alexander’s question:

could you please… address Americans in this country who are scared right now?

Fauci then had to clarify that what Trump said was based on Trump’s “feeling” and not based on “clinical evidence”.

Some people say you know a real leader during a crisis. This is a crisis. And as we’ve seen recently, Trump’s no leader. He’s shown little to no leadership during this crisis so far and has instead relied on his own baseless “hunch” to contradict real experts. And he’s added racism to explain away the horrors of this virus calling it the “Chinese virus”. Trump has never been fit to lead any democracy, so it’s quite tragic he’s at the helm at a time like this.