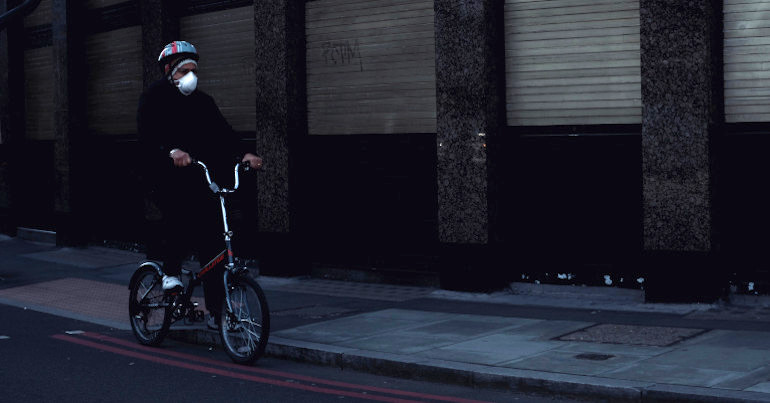 This article is about my experience of being involved in one of the thousands of new mutual aid groups which have sprung up across the British Isles. It’s the first thing that I have written in this confusing time since the global coronavirus (Covid-19) outbreak reached the UK, and it’s been difficult to write. I hope it will be the first of many articles about the growth of these mutual aid groups.

A time of uncertainty and isolation

The last week or so has been pretty memorable for everyone. Full of stress and anxiety about friends and family who are vulnerable to the spread of coronavirus, and made more difficult by the enforced separation from many of the people we’re closest to. It’s also a time of letting go of old plans, and getting used to the fact that many things have changed, maybe for a long time. Some things we’re used to could change forever.

It’s also been a time of worrying about who will be affected worst by this epidemic. About homeless people, people in nursing homes, and those with existing illnesses. About those who’ll lose their livelihoods because of the need for social distancing. About people in prison whose visits have been stopped. About the refugees who are on the move across Europe, and who will be especially vulnerable to the virus. About the people who are still enduring military oppression, that will not stop even as the pandemic becomes global.

At the same time, amidst all this worry, stress, and isolation there’s been a glimmer of hope. People have come together across the UK in response to the mounting crises caused by the epidemic. Thousands of local mutual aid groups have been established as community support networks.

It’s inspiring to see people coming together, supporting each other, and using the term mutual aid. For me, it’s only by organising together in a spirit of mutual aid, rather than charity or voluntarism, that we can support each other to survive. Not only through the current coronavirus situation, but also through the hardship caused by the inequality of our society, and the ecological crises that we are facing.

According to a website set up to support the network of mutual aid groups in the UK:

Mutual aid is where a group of people organise to meet their own needs, outside of the formal frameworks of charities, NGOs and government. It is, by definition, a horizontal mode of organising, in which all individuals are equally powerful. There are no ‘leaders’ or unelected ‘steering committees’ in mutual aid projects; there is only a group of people who work together as equals.

Mutual aid isn’t about “saving” anyone; it’s about people coming together, in a spirit of solidarity, to support and look out for one another

A member of Bristol’s BS5 mutual aid group, that I’m part of, told The Canary:

We need mutual aid regardless of the pandemic. But now it is more pertinent than ever… Many people have suffered from state policies of austerity, [immigration] detention, racist border policies and in many other ways.

Mutual aid groups are an alternative that rely on different principles, of support and solidarity.

In my neighbourhood of Bristol, groups were organised fast. As the news broke about the scale of the coronavirus epidemic in Italy, a Bristol Community Care Facebook group was established, which soon gained many thousands of members.

People across Bristol quickly came together to print thousands of flyers offering support to people in their local areas. Neighbours I’d never met began talking online, and quickly organised to leaflet every single house in our neighbourhood.

On my street, a WhatsApp group was set up to support people who were self-isolating, and to share information. This group has already been used to organise small but important acts of solidarity. From shopping and picking up prescriptions, to cooking for neighbours who don’t have proper kitchen facilities.

The people ‘responded before the state did’

According to one member of the BS5 mutual aid group:

People, neighbours friends and organisers responded before the state did. We set up groups, began coordinating, printed leaflets, spoke to people and began getting people what they needed. This was before the local council stepped in. Some people were self-isolating, or couldn’t get what they needed from the shops, couldn’t access medication

Another member of the BS5 mutual aid group told The Canary:

According to Abby, another member of the same group:

I think local groups are better placed to get a sense of what’s needed and provide it long before a centralised system can.

At this moment the key aim of organising is to get the relevant help to people in need as quickly as possible.

One member of the group, who preferred to remain anonymous, said:

Hopefully mutual aid groups will build up some form of community that has disintegrated over the last few decades. People will feel comfortable to talk to their neighbours again, and we can start to think about resilience and autonomy.

Of course the immediate priority is making sure people have what they need in terms of food, shelter, access to health. But the coronavirus is not the only virus we are facing as a species.

Many people have long been worried about climate change and biodiversity collapse… or the model of perpetual growth that capitalism relies on.

“A possibility of a new future”

Last week people from mutual aid groups in the BS5 area met up to discuss how we could organise together. An ambitious proposal was made:

We propose a structure which we hope will ensure that information is coming from the ground level at all times, and which ensures that power remains with people at the street and neighbourhood level. There will be needs that can’t be met on a street level. We will need processes that can involve people from further away – neighbourhood wide, city wide, or even further. If we need to make demands as local communities from the council or government, we will be stronger coordinating this together.

The proposal is explained in an infographic: 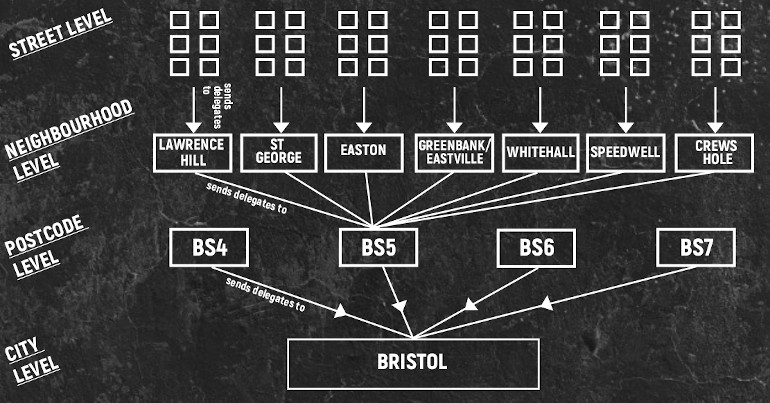 This could be used as a model of cooperation beyond the coronavirus crisis. The proposal goes on to say:

This should be read not just as a reaction to the current situation, but also as a possibility of a new future

“We need each other”

The current crisis starkly illustrates the fact that we need community cooperation more ever.

Abby from the BS5 group told The Canary:

We need each other, no matter what walk of life we’re from or what our individual politics are.

We may not be able to go back to the way the world was before this crisis. But the incredible mutual aid response to the coronavirus epidemic shows that we have a hope of building a just, equal and free society in the place of the old. We need to hang on to that hope with everything we’ve got.