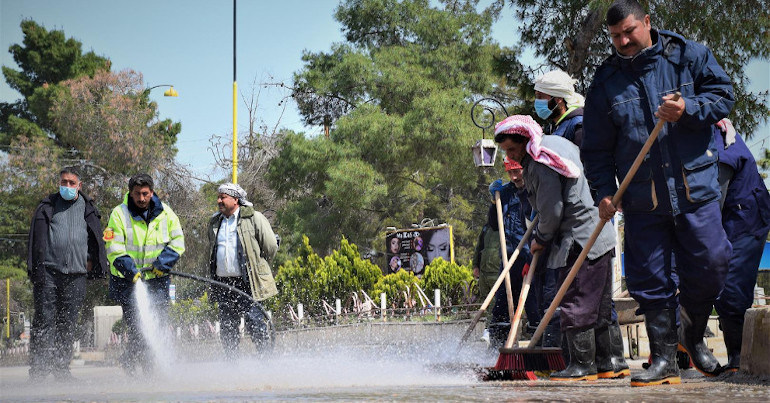 Turkey’s attacks on northeast Syria show no sign of abating. This is despite United Nations pleas for military conflicts to cease while the world deals with the coronavirus epidemic.

Turkey invaded northeast Syria in October 2019. Ed Sykes wrote for The Canary at the time:

The Turkish army, NATO’s second largest, launched an invasion of northern Syria (aka Rojava) in October. Turkey and its extremist allies quickly faced accusations of ethnic cleansing and war crimes. And they displaced more than 300,000 civilians while killing at least 250. They also caused great destruction and misery in communities which had been at the forefront of fighting against Daesh (Isis/Isil) and which had been building a progressive democratic system in the middle of Syria’s brutal conflict.

According to the ANF news agency, two civilians were injured by Turkish shelling in Tel Rifaat on 26 March.

In contrast, the Syrian Democratic Forces (SDF) has announced the halting of military operations to focus on dealing with the coronavirus threat:

The @UN announce their support for the Syrian Democratic Forces @cmoc_sdf's halting of military operations to focus on the coronavirus threat, and call on other parties in the Syrian conflict to follow suit.

As of yesterday, Turkish shelling continued.https://t.co/A1JajgqLxu

The SDF is an alliance of Kurdish and Arab militias that has been at the forefront of the fight against Daesh.

. At the time of writing, at least five cases of coronavirus are confirmed in Syria.

The Autonomous Administration of North and East Syria is low on intensive care beds and ventilators. According to the RIC:

"The Autonomous Administration has about 30 intensive care beds. The @RojavaIC has said that there are forty ventilators in the region.

Although the World Health Organisation has sent coronavirus test kits to Syrian regime-held areas and Turkey has provided some in the Idlib area, there are none in northeast Syria. RIC tweeted:

📌@WHO has sent 1200 test kits to regime-held areas

📌No test kits in NE Syria

📌 Samples must be transported through warzone to Damascus, which prioritizes its own tests anyway

Heyva Sor a Kurdistanê, a medical NGO operating in northeast Syria, made the following statement about the situation:

North and East Syria/Rojava faces unique dangers. The recent Turkish attacks have led to additional instability and other risk factors. Hundreds of thousands of displaced people living in camps across the regions are uniquely vulnerable to this disease.

As in other countries, authorities in Rojava have taken steps to stop the spread of the virus: curfews, bans on public gatherings, shutdowns of non-essential businesses, and closures of schools and universities.

The RIC went on to explain the difficult choices faced by the Autonomous Administration in dealing with the coronavirus pandemic:

"Due to conflict with Turkey, the closure of the Iraqi border & isolation from NWS, controlled by Turkish-backed armed groups, NES can either wait for a nonresponsive @WHO or rely on the Syrian govt., which exploits the few available resources for its own political gains."

Heyva Sor also said that a request has been sent to international organisations for support:

The Health Commission of the Autonomous Administration of North and East Syria has sent a request for support to all international bodies and organizations dealing with health issues, including the United Nations, the World Health Organization, and the European Union. We reiterate the need for international support for the Autonomous Administration in its efforts to fight this pandemic.

The people of Northeast Syria have experienced years of attacks by both Turkey and Daesh. Now they face a new battle for survival against the coronavirus pandemic. The Rojava revolution needs international solidarity now more than ever.