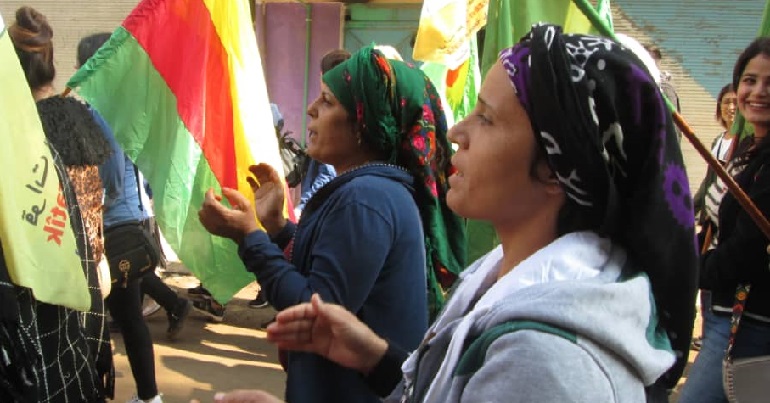 The Turkish army, NATO’s second largest, launched an invasion of northern Syria (aka Rojava) in October. Turkey and its extremist allies quickly faced accusations of ethnic cleansing and war crimes. And they displaced more than 300,000 civilians while killing at least 250. They also caused great destruction and misery in communities which had been at the forefront of fighting against Daesh (Isis/Isil) and which had been building a progressive democratic system in the middle of Syria’s brutal conflict.

The Canary has previously amplified the voices of civilians who have suffered as a result of Turkey’s invasion. Now we’ve taken a look at the impact the Turkish campaign has had on Rojava’s budding progressive projects.

were home to some of the most advanced ecological and cooperative projects in North and East Syria, and their invasion and occupation has destroyed years of hard work. In the weeks before the invasion, our researchers visited working agricultural cooperatives in this fertile region, where poor villagers came together to raise crops or tend to sheep and share the profits equitably, with start-up capital and further support provided by the Autonomous Administration [Rojava’s government].

He continued by stressing that:

Plans were underway to revamp and expand the still-incipient reorganisation of the local economy along cooperative lines, putting the focus on agricultural cooperatives established on a village-by-village basis by villagers with no access to land of their own. But these plans were brought to a violent halt by the Turkish invasion.

Our report ‘Turkey’s war against civilians’ documents the systematic seizure and looting of six agricultural cooperatives in the Sere Kaniye countryside, with the loss of hundreds of tonnes of wheat and fertiliser along with agricultural machinery, plus the cooperative Mesopotamia bakery in the city.

Turkish-led terror has both a material and psychological impact

This repeats what happened in Afrin, which had been the most productive region of North and East Syria prior to its invasion and occupation. The local economy in the newly-occupied areas is following the same pattern, becoming dominated by Turkish-backed factions looting, cutting down decades-old olive groves to sell the wood for a quick profit, and extorting and blackmailing those locals who do remain in the area.

Moving North and East Syria towards a cooperative economy is a project still in its infancy, and one which needs many years of work to achieve. Turkish threats, invasion and military operations do not only cause material harm. When everything could be destroyed any day in an airstrike and handed over to violent, extremist factions, it is very hard for local people to establish long-term projects in line with the ecological and cooperative principles of the political movement here.

Co-operation in Mesopotamia co-ordinator Jo Taylor visited Rojavan cooperatives in 2018. And she also told The Canary about the Jinwar ‘women’s village‘ – a place embodying the women’s liberation at the heart of Rojava’s governing ideology. One of its key aims was to “put power in the hands of women”, she said.

The Internationalist Commune of Rojava, meanwhile, explains that Jinwar:

The Turkish-led invasion, however, has forced Jinwar to request support from around the world:

And a longtime resident and organiser at Jinwar recently gave a powerful perspective on the Turkish-led invasion to Women Defend Rojava, which explained that:

Although due to the location of the village many more vulnerable residents have moved to other places, life still goes on in Jinwar.

As one Jinwar spokesperson told The Canary:

We are in the village and we continue life and work here, which is part of our resistance against the threat of occupation. But there is always the danger that something could happen. Jinwar is located quite near to the Turkish border and there is increasing activity of jihadist sleeper cells in all the area, so we have to be very attentive.

Indeed, the fact that the Turkish invasion and occupation is no longer making headlines in the Western media doesn’t mean that everything’s fine. It’s not. So anyone who hopes for a free, peaceful, and progressive future for the Middle East must keep speaking out in support of Rojava. Because the less the world knows, the easier it is for Turkish-led invaders to keep committing their crimes with impunity.