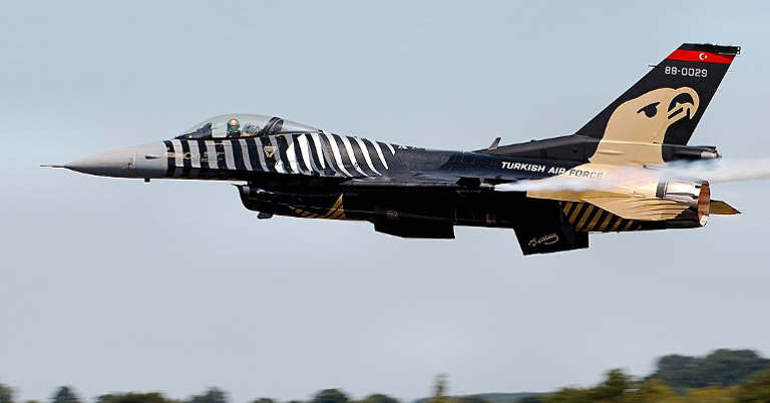 Campaigners in Plymouth have written to a local company demanding that it:

cease all trading with the Turkish military and with Turkish arms companies – until there is clear evidence of an end to the war crimes and human rights violations against Kurdish people.

As The Canary reported in October, Atlantic Inertial Systems (AIS) in Plymouth has previously applied for military export licenses to Turkey. AIS is owned by the aerospace company United Technologies Corporation (UTC). AIS produces systems used in a range of guided weapons.

Turkish-led forces invaded northern Syria (aka Rojava) on 9 October. The NATO member has faced accusations of ethnic cleansing and war crimes. Meanwhile, the Rojava Information Center said its invasion had killed over 300 civilians by the end of October. The offensive has also created around 300,000 displaced people.

After the start of the Turkish invasion, Plymouth and Devon Kurdish Solidarity Network wrote to AIS/UTC Aerospace Systems, saying:

We are writing to you because of your firm’s many arms export control licenses to Turkey over the years. As you may be aware, the Turkish military recently began an invasion of (majority-Kurdish) North-Eastern Syria. As well as shelling civilians and targeting civilian infrastructure, the invasion has seen former ISIS [Daesh] militants armed with Turkish equipment, and has already caused the escape of hundreds of ISIS prisoners captured by Kurdish forces in the region. For this reason the invasion has been widely condemned by world leaders, not just for humanitarian reasons, but for the risk that escaped jihadist militants pose to all of us.

Since the invasion began… we have seen clear evidence of war crimes, including the execution of civilians and civilian leader Hevrin Khalaf, on Saturday 12th October.

This is in a context of serial human rights violations by the Turkish state. The European Court of Human Rights has made thousands of judgements against Turkey. Many judgments are related to systematic executions of Kurdish civilians, destroyed villages, murdered and disappeared Kurdish journalists, activists and politicians.

Given all of this, we believe that there is a clear case for you to cease all trading with the Turkish military and with Turkish arms companies – until there is clear evidence of an end to the war crimes and human rights violations against Kurdish people. Please clarify as a matter of urgency whether your company still exports to Turkey.

Now its down to us

Plymouth and Devon Kurdish Solidarity Network has not received any response to its letter. Hayley Kemp, a member of the group, told The Canary:

Despite all their profits, the people in charge wouldn’t even find time to reply to our letter. They’ve shown no concern at all that they may be complicit in war crimes and attempted ethnic cleansing by the Turkish government. Meanwhile our friends are being killed by the Turkish army and the terrorist jihadist groups they arm and sponsor. The government wont take action, the company wont take action, now its down to us!

The actions of the Turkish state are a threat to us all, we must stand together in solidarity against rising fascism worldwide. That begins with resistance against those who would support the regime with their words and with their weapons.

The Canary also contacted the company to ask whether it is still exporting military components to Turkey. We had not received a reply by the time of publication.

Meanwhile, the Turkish military is accused of carrying out ethnic cleansing in the areas it has occupied in northeast Syria. Turkey’s invasion has displaced hundreds of thousands of people, many of them Kurdish. The Rojava Information Center says Turkey is replacing those displaced with refugees from other parts of Syria in an attempt to change the demographics of the area:

Our research in the latest from @ForeignPolicy, backing up @MazloumAbdi's claim forcible demographic engineering is underway in Turkish-occupied areas of NE Syria: Kurdish locals face violence if they return, while Arabs are bussed in to replace them.https://t.co/q7dS5SOcXD

The Rojava Information Center also says local people are being prevented from returning to their homes in the occupied areas:

Local interviewees report bribes of up to 100,000SYP ($150) to return to Turkish-occupied regions of North & East Syria – especially Sere Kaniye – to check on their property. Only older individuals can safely return, though sources aged up to 75 have also been kidnapped & beaten. pic.twitter.com/LKJrH2rzFB

Kurdish communities and their supporters are calling for people to force the British government to suspend all existing arms export licences to Turkey, and for a boycott of Turkey.