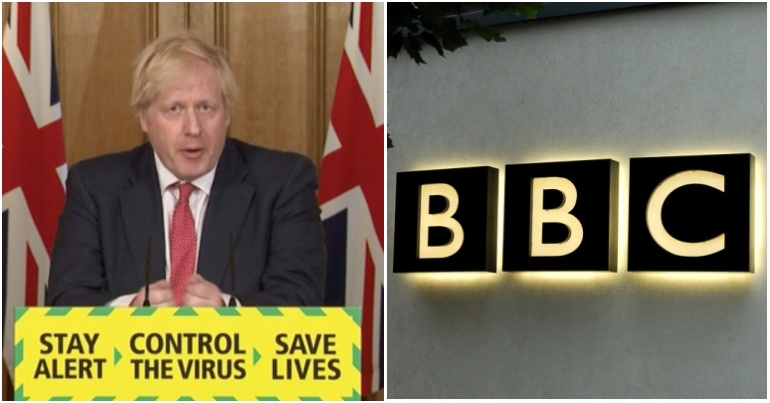 On Sunday 10 May, Boris Johnson changed the lockdown rules. Speaking before guidelines had been published, Johnson caused confusion with new rules and new messaging. A large consensus of people across the political spectrum found the government’s “stay alert” messaging muddled and meaningless.

In fact, the new rules were so confusing that even Dominic Raab and other Tory MPs couldn’t get their heads around them.

But one of the measures announced could have a devastating impact on seaside and rural communities across England. Because Johnson has now decided that people can drive to other locations for their exercise. And instead of doing this in a measured way that would protect small communities across England, both Johnson and the BBC made sure people living in these areas are truly fucked over.

In the BBC News Special prior to Johnson’s press conference on 11 May, chief political correspondent Vicki Young set out her interpretation of the new rules in England:

So in England, for example, from Wednesday, you’re going to be able to drive to the beach. It doesn’t matter how far away that is. But of course you can’t drive into one of the other countries in the United Kingdom.

In other words, seaside towns and villages across England, often places where there are small rural and elderly populations, are likely to see an influx of tourists given the green light to travel by the government and the BBC. And given the much more sensible response from governments in Wales and Scotland, where daytrippers will still face fines, the pressure will increase on beauty spots in England.

But it’s not just seaside places which could see an influx. During the press conference, Johnson was asked a question from a member of the public about visiting the Lake District. But anyone who was hoping for a bit of clarity on the issue would have been disappointed by Johnson’s response:

Alex in the Lake District asked the Prime Minister whether there'll be a limit on how far people can travel, under relaxed lockdown rules.

Here's what Boris Johnson has to say… pic.twitter.com/yQ9cfFC0em

While Johnson clarified that people shouldn’t be “staying in places”, this was the extent of his advice other than repeating his mantra that it had to be done with “social distancing”. So, no limits on people driving to beauty spots. And no suggestions on how beauty spots can possibly introduce social distancing.

This was the reaction from Cumbria Tourism:

We are shocked by the timing and short notice of tonight's announcement. We are awaiting further details but the safety of residents must come first. For now, tourism businesses in Cumbria remain closed and we urge everyone to continue to #StayHome.

Those of us who live in rural communities get it. We’re incredibly lucky. I live in Cornwall and access to the sea is within walking distance. I know this makes lockdown easier. And criticising these statements from Johnson and the BBC has nothing to do with being selfish and wanting to keep places for local people.

But it does have everything to do with protecting our communities, our friends, and our loved ones.

The NHS in Cornwall cannot cope with additional people. Before the coronavirus pandemic took off in the UK, our one major hospital was already at breaking point. On 3 January, the BBC reported Royal Cornwall Hospital was taking the “unprecedented” move of turning away people with minor injuries. The hospital stated:

This is the only critical care unit we have and that unit only has 15 beds. According to the Telegraph, the situation is the same across the southwest:

The south west looks most vulnerable in terms of ratios. It has the oldest population (so highest expected mortality) and lowest number of critical care beds per head of population. The modelling suggests it needs six times more than currently exists there (600 per cent).

There is nowhere to stay. There are very limited places to eat, other than takeaways. We do not believe that this is staying alert – to undertake a long, unnecessary journey.

At this time we ask you to stay away, and in the comfort of your own home, plan a future break to Cornwall when it is safe to do so.

As Fréa Lockley argued in The Canary on 11 May, Johnson’s new rules are nothing short of a “twisted class war”:

There’s no pretending that lockdown is easy. But, yet again, it was even more difficult for the poorest, most vulnerable people. Lockdown as a single parent, living on Universal Credit in a city high rise or in overcrowded poor housing bears no correlation to those who sipped gin during Zoom chats in large gardens of the houses they own knowing that (at least) 80% of their high income was secure. Let’s not ever fool ourselves about that. And now it’s primarily the people who faced the harshest conditions under lockdown who’ll be forced back to work first. And we know they’re less likely to be offered proper protection. That’s not how capitalism works.

And this is exactly the case with the new rules on driving to rural areas. It’s not those who’ve faced the worst conditions of lockdown who’ll be able to do this. It won’t be the single parent on Universal Credit who can jump in a car and head to the beach, let alone afford a car in the first place. It’ll be the rich and the middle classes who can take advantage of this.

Moreover, it’ll be the rich bringing infection to some of the poorest parts of the country. Cornwall, for example, is the second poorest place in northern Europe. And, as the BBC reported, coronavirus disproportionately impacts those in poorer areas:

Office for National Statistics analysis shows there were 55 deaths for every 100,000 people in the poorest parts of England, compared with 25 in the wealthiest areas.

Make no mistake, you will not be welcome. This isn’t because we’re not lovely people or we don’t want to share the beauty of our local areas, but because we are worried our loved ones will die if you come here now.

So please don’t be selfish. Please stay at home.