Piers Morgan's had many low points in his career. Today was certainly not one of them. - The Canary 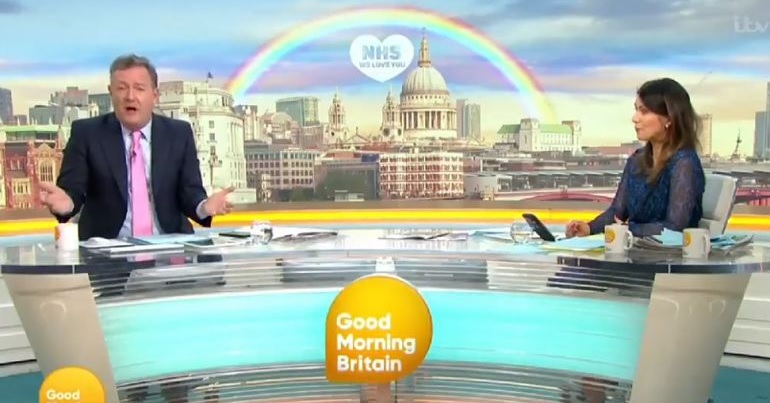 On 11 May, Piers Morgan buried the government’s shambolic ‘conditional plan’ for the UK’s next steps in the coronavirus (Covid-19) crisis.

ITV‘s Good Morning Britain co-presenter tore into its bright ‘new’ idea to quarantine people arriving at airports. And justifiably so, given that many other countries have been doing that for months already. Morgan also utterly humiliated Conservative MP Andrew Bridgen by asking him a simple question that concluded with the MP contradicting his own government’s advice. The presenter then destroyed the MP’s attempt to deflect criticism of the shambles.

Morgan has had many, many low points in his career. But his performance on 11 May definitely wasn’t one of them.

Boris Johnson announced the next stage in the UK’s coronavirus plan on 10 May. The unveiling has been a total botch job, filled with contradictions and a complete lack of clarity.

One of the new changes, however, is that the government is going to start quarantining people who arrive in the country from overseas. As Morgan pointed out on Good Morning Britain, foreign secretary Dominic Raab has spoken on the topic. Morgan noted that Raab said “now we’ve got the virus down, there is a risk that people coming in from other countries could bring it in”.

Really? Really? You’ve just realised that there’s a risk of people bringing the virus into this country, Dominic Raab?…

90% of the world’s countries took precautions at airports – including lockdown, including quarantine, including testing. Guess who was in the 10%? The UK.

Piers Morgan – The Govt can spin it any way it likes… it doesn't change the graph you shows us everyday… 2nd worst death toll in the world.#GMB pic.twitter.com/X222dInYQ5

Around 18 million people travelled into the UK in the three months prior to the lockdown towards the end of March. Flights into the country have plummeted since. But there are still up to around 10,000 people arriving in the UK each day – with no measures apart from “posters, digital displays and leaflets with information about the measures in place” at borders, according to the Guardian.

Morgan also spoke to Conservative MP Bridgen on 11 May. He asked the MP:

Bridgen appeared to be on course to say Morgan could indeed see his sons, saying “as long as you maintain social distancing in what you do”. But Morgan cut in:

What you’ve just said is completely against the new rules, as stated. So there you are, a Conservative member of parliament who thinks you know exactly what Boris Johnson has been saying; and yet you’ve just told me to do something I’m not allowed to do…

The MP then tried to frame Morgan’s criticisms as a “diatribe” against the PM. The presenter erupted:

Let me explain what my diatribe is. We have… the second worst death toll in the world. And that’s just the deaths we’re declaring, of 31,000. The real figure, according to any detailed analysis of the ONS [Office of National Statistics] figures, is over 55,000 people. It’s an absolute national disgrace…

We’ve had no testing… we’ve had no PPE for the NHS frontline workers and care home workers, which is why over 200 of them have died…

This is really powerful from Piers Morgan. A grasp of the facts, and the bravery to articulate them, that most political editors and politics correspondents wholly lack. pic.twitter.com/gqFJyJfSUG

Morgan’s presenting on 11 May showed the government up for what it is: grossly derelict in its duty to the people. As some pointed out, though, it’s the exception rather than the rule to see anyone holding the government to account for it. Either in politics:

Those that have cried out for ‘effective opposition’ must be delighted to be seeing it.

It’s just a shame it’s coming from Piers Morgan rather than the Labour leadership.

Or, indeed, in the media:

When Piers Morgan is the principal person holding Johnson’s government to account, what does that say about UK media? Come on UK journalists. Up your game.

Given the government’s atrocious handling of the pandemic, ‘diatribes’ should be a constant feature of ministers’ working days. In fact, a scandal like this would – in a functional society – bring a government down. But with such a subservient and biased media, and such a weak opposition now Jeremy Corbyn has effectively been ousted by the establishment, the Conservatives are getting off lightly.

This travesty isn’t a weird anomaly in an otherwise functional system. It’s the result of the gross dysfunction in Britain right now. That dysfunction is perfectly illustrated by Morgan’s newfound role as a lone heroic truth-teller in the establishment media. Really, Britain? Really?