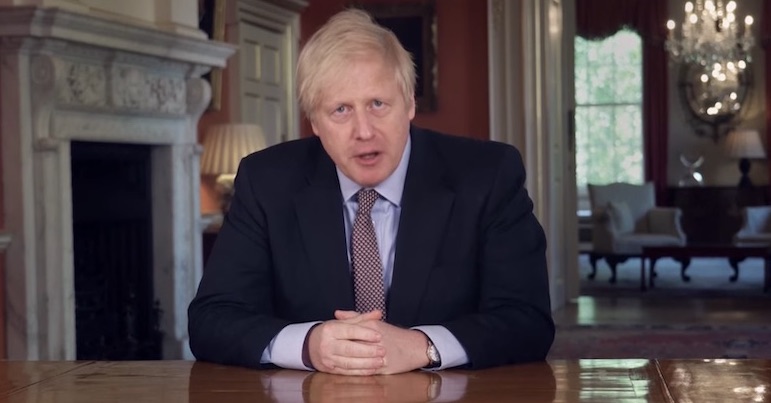 On 10 May, Boris Johnson gave a pre-recorded speech to the UK. This outlined the UK’s next steps in the coronavirus (Covid-19) crisis. With no room for anyone to question anything, and without informing the devolved nations of the outcome, it pushed us from crisis to chaos. We’re now supposed to ‘stay alert’ rather than ‘stay home’. But the implications of this are terrifying, because it amounts to a truly twisted class war.

The UK now has the highest death toll in Europe, and the second-largest globally. Yet Johnson claimed we avoided “what could have been a catastrophe”. Wtaf? How many more deaths does it take to acknowledge it’s already a catastrophe?

The latest Tory announcement, after months of mishandling the pandemic, puts thousands more lives at risk.

“Stay alert. Control the virus. Save lives.” is the new propaganda tool.

Actually, fuck you Johnson, and every Tory too. If we’re ‘alert’ to anything, it’s your continued malicious, destructive and abhorrent mishandling of this crisis. And now, you’ve just effectively palmed off responsibility for this ongoing catastrophe onto us and risked yet more lives.

Most of the lives under new threat are low-paid workers, the poorest people, and the most vulnerable people in our country; the same people who’ve already been hardest hit by ten years of cruel Tory-led austerity.

The Tories already had blood on their hands. Now those hands are bloodstained. This won’t wash off. It amounts to potential murder.

For such an important speech, Johnson’s words were also incredibly confusing. He said:

From Monday, people who cannot work from home are being actively encouraged to go to work instead of being told to only go if they must. But they should avoid public transport if at all possible.

So with less than 12 hours notice, he told people to return to work; to workplaces that don’t yet have updated safety policies, certainly not from the government anyway. Trades Union Congress (TUC) general secretary Frances O’Grady called it “a recipe for chaos” because “the government still hasn’t published guidance on how workers will be kept safe”.

And how do the majority of low-paid workers even get to work and simultaneously avoid public transport? Will fat-cat bosses pay taxi bills for those without cars or an easy commute?

By 11 May, foreign secretary Dominic Raab added to the confusion, saying ‘Monday’ actually means ‘Wednesday’. And we’re meant to trust this government?

Separating out ‘people who can’t work from home’ masks a million other crimes. On the whole, this means working-class people. Construction, factory and agency workers, manual labourers. Thousands more work in offices that couldn’t, or didn’t, set people up for home working.

In 1987, Margaret Thatcher claimed “there’s no such thing as society”. She insisted that “people must look after themselves first”, then led the charge into unions, nationalised industries, and our welfare systems. By 1991, John Major threw the next axe and announced we have a “classless society”.

We all know that’s utter bullshit. The UK still has a working class, albeit too often now easily dismissed as ‘low skilled’ or masked by the horror of zero-hours contracts.

And let’s never forget that Thatcher also bragged that “Tony Blair and New Labour” were her “greatest achievement”.

Coronavirus has seen the most devastating culmination of this carnage.

The pandemic is killing communities already decimated by austerity. It hit the poorest people the hardest. The disproportionate impact of coronavirus on Black, Asian and Minority Ethnic (BAME) communities is also a rising tragedy.

Many people don’t have the (largely middle-class) privilege to work from home. What about single parents? What about the millions of people who now face an impossible decision? As one person told The Canary:

We don’t all have the choice. If we’re told to go back and don’t, we don’t get paid and can’t pay the bills.

It didn’t take long for people to recognise what we need to stay most ‘alert’ to:

On 20 April, it insisted people must “stay at home in order to protect the NHS and save lives”. We lived under that mantra amid a catalogue of failings. There’s no mention of the NHS in the new government directive.

We fell into the coronavirus abyss with an already decimated NHS. With a government that wouldn’t provide enough personal protective equipment (PPE) for workers. This government included “cleaning equipment, waste bags, detergent, and paper towels” as PPE. Pairs of gloves were counted individually.

With at least 154 recorded NHS worker deaths at the time of writing, this government’s now trying to shirk all responsibility – saying coroners shouldn’t investigate links between PPE policy failures and those deaths.

This is an NHS forced to beg retired staff to come back. As The Canary reported, Intensive Care specialist Dr Alison Pittard said the UK only has 249 critical care doctors. “We’re not,” she pointed out, “starting from a good point” because “without staff, we don’t have critical care”. The NHS may be coping with hospital capacity for now, but this comes at huge cost. Vital, lifesaving care is on hold, and this simply isn’t sustainable.

Testing for the virus has already been a “systemic” catalogue of failure and lies. Meanwhile, as the official death toll continues to rise, wider evidence using data from the Office for National Statistics (ONS) shows that’s likely far higher. Whichever version of statistics you look at, each number is someone’s mother, father, sister, brother, or child – now dead.

How many more people will die now? And how long before we rise up against this government? Because let’s face it, there’s no proper opposition under Keir Starmer‘s fawning residency.

There’s been some fightback to give us hope.

Last night’s statement by the Prime Minister was a thinly veiled declaration of class war.

Wherever trade unions are forced to step in to take action against bosses who put their members’ health at risk they will have our full and unwavering support. pic.twitter.com/9Sdvc1DWUe

O’Grady, meanwhile, stressed that government failure has “horrific consequences for our lowest-paid and most precarious workers”. As she also noted, without action, “workers’ lives are on the line”.

True to form, Johnson also lied, claiming he’d “consulted… across all four nations of the UK” about these plans. Utter bullshit. Leaders in Scotland, Wales and the north of Ireland rejected them. So these rules only apply to England.

Last week, the Chief Scientific Adviser told the country that if people are less than two metres apart, the likelihood of infection increases exponentially – but now that is being relaxed.

Just as social distancing started to work, Johnson sent thousands of people back to unsafe working conditions. And let’s not forget, that this also raises risks for each person privileged enough to still work from home. Johnson’s token gesture of appreciation for voters was to announce “more and even unlimited amounts of outdoor exercise”; as though we’re dogs. But these dogs have few safe spaces to run now.

There’s no pretending that lockdown is easy. But, yet again, it was even more difficult for the poorest, most vulnerable people. Lockdown as a single parent, living on Universal Credit in a city high rise or in overcrowded poor housing bears no correlation to those who sipped gin during Zoom chats in large gardens of the houses they own knowing that (at least) 80% of their high income was secure. Let’s not ever fool ourselves about that. And now it’s primarily the people who faced the harshest conditions under lockdown who’ll be forced back to work first. And we know they’re less likely to be offered proper protection. That’s not how capitalism works.

All those closeted with enough privilege to still work from home aren’t safe either. Because this threatens our communities too. We all share the same shops, the same streets. This isn’t, and won’t ever be, ‘our’ fault for not staying alert. That is how pandemic transmission works.

When staying alive becomes a marker of privilege, then we know it’s time to rise. Those of us not forced into unsafe workplaces to feed capitalist greed must stand in solidarity with every brother and sister who has. There’s a new frontline now. Resist!