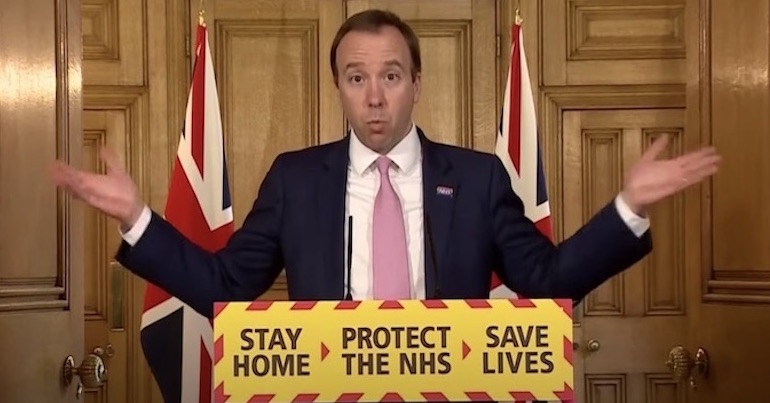 On 27 April, an episode of BBC‘s Panorama lifted the lid on the ongoing scandal of personal protective equipment (PPE) for frontline NHS workers. Its findings were damning. Medical professionals and caseworkers are literally dying as a result of government failings. The following morning, doctors led the call for health secretary Matt Hancock to resign. Yet it barely caused a ripple in the establishment media.

Has the government failed the NHS?

The investigation asked Has the Government Failed the NHS? The answer: Yes.

And this news comes as the UK honours over 100 healthcare workers who’ve died, so far, from coronavirus (Covid-19).

The programme revealed a shambolic catalogue of failings. For example, government promises on delivering “a billion items” of PPE are misleading.

the government is counting items you might not think of as PPE such as: cleaning equipment, waste bags, detergent, and paper towels. More than half the items are surgical gloves. And in most cases, each individual glove is counted rather than pairs.

The New and Emerging Respiratory Virus Threats Advisory Group (NERVTAG) provides the government with advice on pandemics. In June 2019, it advised the government to stockpile surgical gowns. This didn’t happen. Gowns are now in critical demand.

Panorama also discovered “that millions of FFP3 respirator masks are unaccounted for”. Allegedly, there were 33m “on the original 2009 procurement list”. But only 12m FFP3 masks have reached NHS workers.

It also revealed that many healthcare workers feel silenced, but some doctors decided to speak out. One said:

We’ve been put on the frontline… but without frontline protection… We’ve been… sent to battle without any of the resources we need to fight it.

#Lies As a foot soldier of the NHS for over 40 years,I have never been so hurt watching #Panorama The government was counting each single glove as an item of PPE in order to fiddle the figures &prove they were meeting demand. #PPEshortage killed #NHSheroes !@MattHancock Resign

Watching #Panorama & want to see govt held to account for delays, lack of transparency, lack of PPE – despite warnings back in 2016? Support Dr Moosa Qureshi, taking govt to Court if they do not publish results from The Cygnus Exercise.@JRcovid19#COVID19https://t.co/cGI9E7oDm2 pic.twitter.com/xYNtaf2fUz

SO Will Hancock be resigning today after the explosive revelations in the #Panorama NHS special? Well it’s not up to him, it’s up to you general public. If you want him to resign, put the pressure on, & he will have to. Don’t, and he will continue to put our lives abd NHS at risk

Just watched #Panorama How the government can survive and stay in power following that is unfathomable. They are drenched with guilt. This lazy PM and his cabinet must be held to account.

Unsurprisingly, many people felt angry about the findings Panorama exposed:

I awake this morning in the wake of last night's #Panorama expecting every single Labour MP, #NHS worker, care worker, all journalists, trade unions, any body who claps, Infact fuckin everybody to call out the murderous, backstabbing tory bastards…
Enough is enough

After watching #Panorama last night I can only describe the gov. lack of planning, procurement of PPE & woefully negligent response to COVID-19 as criminal acts. I'm very angry & upset, but sadly not surprised, NHS/care staff are being used as disposable commodities.

Others, meanwhile, criticised the lack of establishment media coverage of this crisis:

Odd, isn’t it.#Panorama last night didn’t happen.
No coverage, no recrimination, no scandal.
No mention on #r4today or BBC news
Except for…
the Mail. pic.twitter.com/3k2MAQii78

Been watching BBC Breakfast and listening the radio and apparently #Panorama didn't happen at all, we just imagined it.
But the headline is "Boris Johnson will lead" a minute's silence. Which will be counted as 60 pieces of silence.

The Royal College of Physicians (RCP) surveyed doctors between 22-23 April. in a previous survey (1-2 April), 22% couldn’t access adequate PPE. In the next survey, this went up to 26.5% of respondents. Commenting on these results, RCP president Professor Andrew Goddard said:

We’re living through the darkest times the NHS has ever faced and this survey shows the reality of the situation facing hospital doctors at the moment.

The lack of PPE remains their biggest concern and it is truly terrible that supply has worsened over the past three weeks rather than improved.

And yet according to Politics Home, the morning after Panorama screened, Hancock “disputed” these results and defended the government’s actions. He also said:

The guidelines do say that in some cases PPE can safely be re-used and that’s a good thing because PPE is in global short supply.

So our health secretary not only disputed evidence coming from frontline doctors, he defended the government’s proven failings on PPE. Hancock’s now telling people doing their best to save lives that they should recycle what little PPE exists. That’s how twisted this government is. Meanwhile, the UK is on track to record the second largest global death toll from coronavirus.