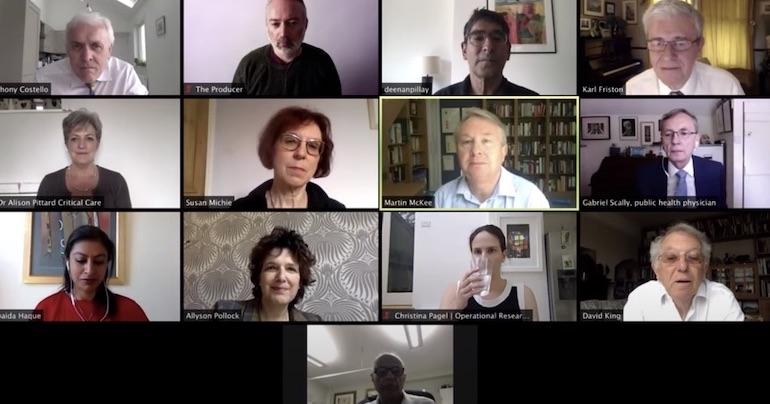 The scientific community has issued a direct challenge to the Tory mishandling of the coronavirus (Covid-19) crisis. News emerged that Dominic Cummings was an “active participant” in supposedly impartial scientific meetings. So on 4 May, leading scientific experts came together to discuss coronavirus with full transparency.

On 4 May, former chief scientific adviser David Anthony King chaired the first meeting of the Independent SAGE. A list of the other expert attendees was publicly available for all to see. The meeting discussed where we are now and, based on scientific evidence, how we move forward.

Ahead of the meeting, King explained the importance of this group:

"The issue of transparency has been lost by this government"

Former Chief Scientific Adviser to the Government Professor Sir David King says there should be transparency and no political bias when it comes to the Scientific Advisory Group for Emergencies (SAGE)#KayBurley pic.twitter.com/qcdmnXwD2m

The scientists represented a wide range of expertise. But several themes recurred throughout the meeting. One of the most significant is that any efforts to end lockdown and save lives must come at local level, not the current centralised approach pushed by the government.

Most participants noted that moving forward, properly funded council, primary and social care services are vital to saving lives. However, continued cuts in all three of these areas before coronavirus hit will likely cause more deaths and hardship if action doesn’t come now. They also pointed to the drastic underfunding of the NHS in the past ten years.

Dr Alison Pittard, an Intensive Care specialist, explained that there are only 249 critical care doctors in the UK. She said the government promised 100 extra training places for doctors, but nothing to fund more nurses. “We’re not,” she pointed out, “starting from a good point” because “without staff, we don’t have critical care”. The NHS may be coping with hospital capacity for now, but this comes at huge cost. Vital, lifesaving care is on hold, and this simply isn’t sustainable.

Several of the experts – including Professor Allyson Pollock and Dr Zubaida Haque – made the important point that current government centralisation also continues to fail communities hardest hit by ten years of Conservative-led austerity. Studies have already shown that the pandemic has hit the poorest people the hardest. The disproportionate impact of coronavirus on Black, Asian and Minority Ethnic (BAME) communities is also a rising tragedy.

Pollock, and others, noted the devastating “collateral damage” from coronavirus caused by widening inequality.

This built a compelling picture. If the government continues its centralised approach and pushes to privatise more vital services, such as testing and tracing, the death toll will increase. Whereas if we listened to these experts, and the government prioritised funding and resources at local level, the death toll would be far lower. This path also creates a far better chance of limiting the impact of a second coronavirus surge, particularly for the most vulnerable communities.

The conversation frequently turned towards discussion about how and when to end lockdown. While this prompted some debate, all agreed that more testing (antigen and antibody) was vital. Former World Health Organisation (WHO) director Professor Anthony Costello challenged the UK’s ‘five measures’ against WHO recommendations: 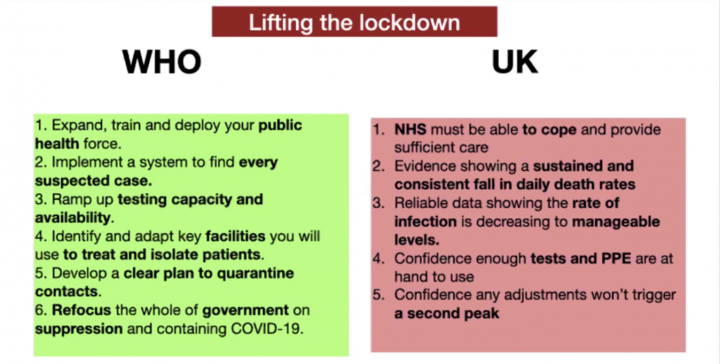 Pollock also accused the government of using data as a “propaganda tool” in its daily briefings. Firstly, these doesn’t include accurate numbers from the Office of National Statistics (ONS). But the way the government is using data masks what’s actually happening.

Throughout the meeting, experts discussed the need for urgent investigation into unprecedented “excess mortality rates” during the crisis. Most stressed this is crucial to our understanding of the pandemic. It’s also vital to understand how to end lockdown and develop action plans to save lives. On 1 May, Full Fact also noted:

These are not petty political points. How many people are dying, and why, are the most urgent and important questions of the pandemic.

“This is also about the social crisis as well”

Several experts pointed to the need to fund and address the impact of the pandemic on mental health. Some noted that it’s already triggering a crisis in anxiety and depression. Post-traumatic stress disorder (PTSD) is likely to rise, especially among health and social care workers and also among bereaved families and those who’ve been critically ill. King pointed to lessons learned from the 2001 Foot and Mouth outbreak during his time as chief scientific adviser. He admitted that in the push to halt the disease, he failed to acknowledge the impact on communities and people but now recognises how important a holistic approach is.

The social and economic aspects of this [are] hugely critical… domestic violence has gone through the roof since lockdown. But what you don’t have from government is that analysis, the social trade-offs of lockdown… Not to undertake any analysis, not to be on the front foot about the social trade-off of lockdown, what it means for people to be in overcrowded housing, what it means for vulnerable women, for vulnerable children to be in that lockdown [and] what the government should be doing.

They’ve put some money aside for domestic abuse services but it’s not going to be enough… There’s going to be a lot more… vulnerable women asking for refugee services during the exit of lockdown, rather than now. And the question will be ‘have government been putting aside enough refuge places?’… This is also about the social crisis as well.

"The social and economic aspects of this is hugely critical. Zubaida Haque discusses the need for analysis and data regarding the social trade-offs of lockdown. What does it mean for vulnerable people to be in lockdown and what the government should be doing. #IndependentSAGE pic.twitter.com/gc0EXdglxq

The scientists on SAGE are among the most eminent in their fields. It is factually wrong and damaging to sensible public debate to imply their advice is affected by government advisers listening to discussions.

But according to the Guardian, anonymous SAGE attendees questioned Cummings’ attendance. One said: “He was not just an observer”. Meanwhile, another stressed:

When a very senior civil servant or a very well-connected person interrupts, then I don’t think anyone in the room feels the power to stop it. When you get to discussing where advice might be going, there have been occasions where they have been involved, and a couple of times I’ve thought: that’s not what we are supposed to be doing.

This, it seems, influenced vital scientific evidence informing government decisions. The Tories’ shambolic response to coronavirus means we now have the second-highest global death toll. King’s past experience at SAGE meetings suggests both the format and the experts he lined up for Independent SAGE are well informed to advise. Is our government ignoring similar discussions because of Cummings’ interference?

Independent SAGE agreed on crucial areas for further investigation. Its science-based recommendations will save lives. If the Tories won’t listen, then it’s up to us to amplify Independent SAGE.