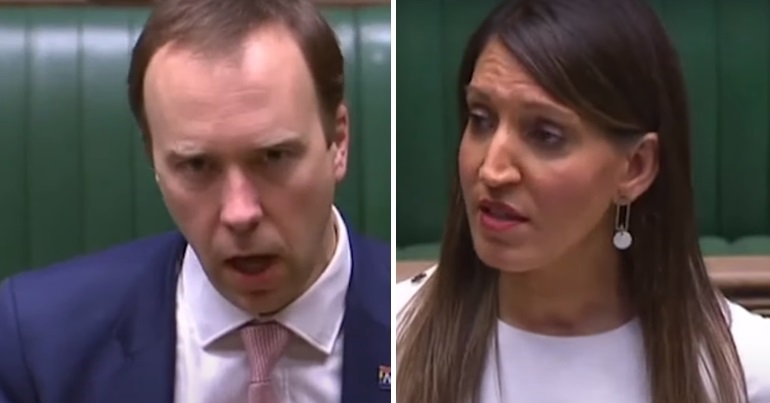 The UK currently has the highest coronavirus (Covid-19) death toll in Europe – at over 32,000. But rather than accepting government mistakes with humility, health secretary Matt Hancock instead chose to patronise an A&E doctor, essentially telling her to ‘know her place’.

Shadow mental health minister Rosena Allin-Khan has also been working on the NHS frontline in recent weeks. And she has been particularly critical of government “propaganda” on coronavirus testing. In parliament, she asked Hancock to “acknowledge that many frontline workers feel that the government’s lack of testing has cost lives”. He said, “no, I don’t”.

I think she might do well to take a leaf out of the shadow secretary of state’s book – in terms of tone.

People across the country soon stressed that there was “absolutely nothing wrong” with Allin-Khan’s tone:

I was watching Health Questions. Absolutely nothing wrong with your tone. It reflects and reverberates with the reality of what yourself and other NHS workers are experiencing. Hancock very unwise to be so dismissive #coronavirus

A neutered opposition is a danger to democracy

Some experts have called the government’s response to the coronavirus pandemic a “national scandal”. But the scandal hasn’t just been in recent weeks. It’s been years in the making. Because Boris Johnson’s party has decimated the NHS in the last decade via its ideological austerity policies which led to at least 130,000 unnecessary deaths. In doing so, it has left the service struggling to cope with this pandemic. Government choices regarding protective equipment, testing, and lockdown, meanwhile, have added to this perfect storm. As Newcastle University’s Prof Allyson Pollock has highlighted, coronavirus has also “shone a spotlight on the widening inequalities” in Britain, especially the “forty per cent of our children living below the poverty line”.

Hancock’s patronising ‘calm down, dear’ moment is no surprise, though, considering the recent neutering of the official opposition. The corporate media onslaught against the Labour Party that helped to secure the Conservatives’ re-election in 2019, for example, continued into the coronavirus pandemic. Amid a wave of pro-government propaganda, people like former Labour leader Jeremy Corbyn faced criticism for daring to hold the Tories to account for their fatally incompetent response. Then, when Keir Starmer took over as leader, he began to move Labour rightwards – neutering the party’s criticism of the government. He said he wouldn’t engage in “opposition for opposition’s sake”, and even called part of the Tories’ coronavirus response “amazing”.

In short, it looks like the Conservative government could get a fairly easy ride from the main opposition party under Starmer’s leadership. He may hope this will win him some support from people who voted Tory in 2019, but he’s doing a disservice to the British public in the process.

Britain now has the highest death toll in Europe and the opposition views itself as an appendage to the civil service. https://t.co/5mPga40ewv

Why, in the midst of a terrifying crisis, would voters switch support to an opposition that isn’t offering a robust alternative to the government’s flailing? https://t.co/YEY06i0Imw

If lives are literally at stake, we need to act like it

Polite politics doesn’t work. Jeremy Corbyn learned that the hard way. He tried to reach out to people who were never going to support him. But as the Labour Leaks scandal has shown, high-level party right-wingers essentially worked to undermine his leadership and election chances. A committed coalition of anti-socialists in the media, meanwhile, perpetuated vile smears to destroy his character in public. And the Tories made lies central to their election efforts. In short, the right doesn’t hesitate to dive into the gutter to defeat progress.

We should be angry about austerity deaths. We should be angry about coronavirus deaths. Putting a smiley face on the facts to protect Tory feelings helps no one. We must prevent further austerity at all costs. And Labour must not try to ignore the hunger for radical politics on the left. This is not a game. People’s lives are literally at stake. So we need to act like it.