The Canary has created two images which show new Labour leader Keir Starmer’s first shadow cabinet to be much less about ‘unity’ than former leader Jeremy Corbyn’s was. This is particularly important considering that Starmer positioned himself in the recent leadership election as the “unity candidate“, and that Corbyn’s enemies consistently accused him of “dividing” the party.

Corbyn sought unity from the very start. Starmer not so much.

To create the images below, we have used information about whom members of each shadow cabinet nominated or backed in:

For his first shadow cabinet in 2015, Corbyn seemed to bring only three loyalists with him (i.e. MPs who backed him in 2015 and 2016 and backed left-wing successor Rebecca Long-Bailey in 2020). For Starmer’s first shadow cabinet, however, he seemed to bring 16 loyalists with him (i.e. MPs who nominated him for leader in 2020 and who had generally opposed Corbyn’s leadership). In short, it looks like Corbyn made much more of an effort to reach out to his opponents than Starmer’s doing right now.

With these figures in mind, it would be easy to say that Starmer’s mandate is weaker than Corbyn’s was, and that the new leader should put even more of an emphasis on party unity. But his first shadow cabinet suggests he’s actually focusing less on unity than Corbyn did.

While the 2020 leadership election enthused a smaller percentage of the Labour movement than in 2015 and 2016, one thing is clear: members still back big Corbyn-era policies. From nationalisations to scrapping tuition fees, environmental action to empowering trade unions, from taxing the rich more to “a pay ratio of 20:1 for all employers”, one recent poll shows overwhelming support from members. So one might have expected Starmer to include a few more Corbyn supporters in his shadow cabinet. But it seems that wasn’t high up on his to-do list:

Jeremy Corbyn, meanwhile, took a big risk from the very start of his leadership by filling his shadow cabinet with many people who had little sympathy for his principles: 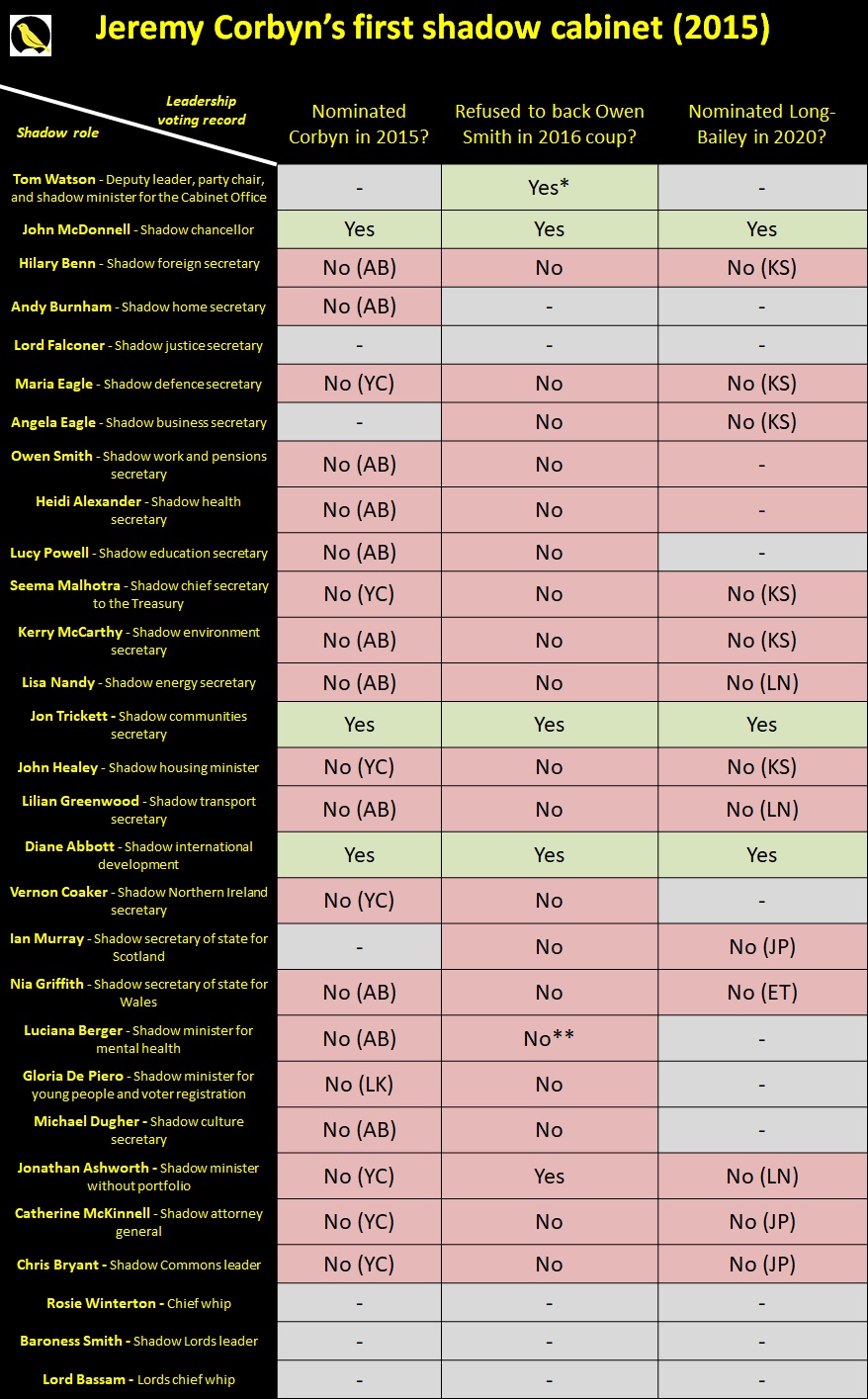 *Watson, however, later admitted to voting for Smith in 2016. **Berger openly supported Smith, but appeared not to nominate him.

Not a good start, Keir

Starmer’s failure to reach out to left-wingers more isn’t the only problem with his first shadow cabinet, though. For example, there’s the likely loss of Corbyn’s principled anti-imperialist focus with Lisa Nandy as shadow foreign secretary. There’s also the worrying appointment of invasion-of-Iraq fanboy John Healey as defence secretary. Then, there’s the presence of Rachel Reeves – who once said Labour should be ‘tougher than the Tories’ regarding the benefit system and who recently got away with celebrating a ‘rabid antisemite’. And finally, there’s the firing of left-wingers like Jon Trickett and Ian Lavery – people who really get why Labour is losing northern communities in England, and how it could turn things around.

If Starmer is really interested in keeping left-wingers engaged with Labour Party politics, he’s clearly got a long way to go.