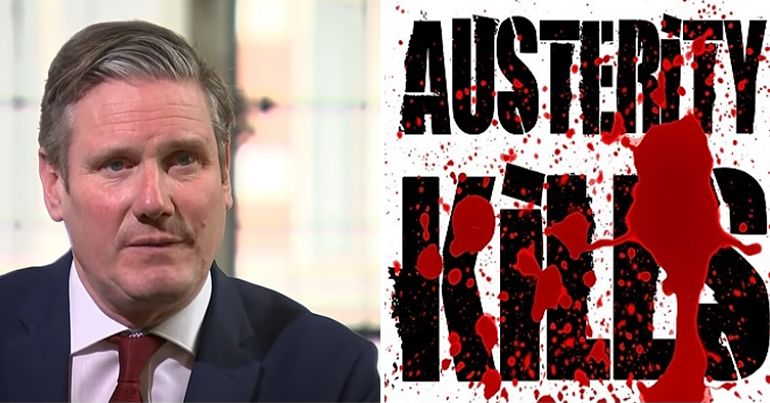 Following his election as Labour Party leader, Keir Starmer pledged to “engage constructively with the government” in tackling the coronavirus (Covid-19) crisis. But admirable as an approach of that nature may be in theory, it makes no sense at all in practice. It has also led to criticism from across the Labour Party.

Because the Conservative government’s handling of this crisis, and the cuts it’s made to the NHS, has cost lives. The absence of a proper challenge could also lead to further austerity. So grassroots members of the labour movement have begun organising a collective labour response. Dr Peter Jones is one of those members, and he spoke to The Canary.

Dr Jones and Chik Collins published A People’s HQ for Covid‐19’: For a united labour movement response to the Covid‐19 crisis. It challenges Starmer’s ‘unified government approach’ position. Instead, Jones told The Canary, it’s calling for a “unified approach of the labour movement”.

Jones said that he and Collins:

Jones says there has only been “fairly mild criticism” of government policy and no:

sense in the labour movement generally that this was an opportunity, in fact a necessity, to develop a united voice to campaign for a general rallying and mobilisation of the labour movement, to oversee to criticise to challenge the government and to develop its own stand and its own position on the covid crisis, to challenge the whole authority of the government and to prepare for the next stages of exit from lockdown and the longer term economic resettlement. Which of course, with the experience of 2008, shows that there are grave dangers to the labour movement as a whole if the Tory narrative continues to prevail and we are made again to suffer the consequences through renewed austerity of this entire crisis.

So Jones and Collins put together a document to generate interest in their idea. Jones claims there has been a “positive response”. He also claims that within the health unions and among those “who know what’s going on” there’s:

He feels there’s a lot of support in the labour movement for a “stronger reaction” to the government. But there’s very little happening at a national level to mobilise this. So he feels now is the time to act. Because:

if we don’t move now, if we don’t start to challenge now and get organised…they [Tories] are the ones who will control the narrative and they will set the agenda.

the UK labour movement urgently needs to: a) clearly establish its own independent voice on the national stage as a united opposition to the Conservative government’s mishandling of the ongoing Covid crisis, and b) show its capacity to assume effective leadership of the crisis as it progresses, based on its own strategic vision of a society and an economy funded and organised ‘for the many, not the few’.

And that over time the core functions of this movement would include:

The document lambasts the “painfully slow” response of the labour and trade union movement. Furthermore, the pandemic highlights the “general failure of contemporary capitalist society to ensure common well being”. The austerity that followed the 2008 financial crash:

was achieved politically by a successful narrative blaming the global economic crisis on Labour and the unions for public sector spending programmes as well as on benefit claimants, including the sick and disabled. A crucial factor in this was the failure of the Labour Party and wider labour movement to seriously attempt to control the narrative, to refuse the cuts agenda and to confidently set out its own independent strategic vision and leadership for an alternative future.

Jones and Collins stress that, as we face this global crisis: “the labour movement seems to be playing a waiting game”. And it appears to be waiting for power to “drop into Starmer’s lap once the crisis is over”. But this could be a “dangerous miscalculation” according to the authors. Because if the Tories emerge from this crisis ‘undamaged’ then working people will “be expected to pay the price”.

They say the labour movement must fight this by highlighting the government’s failure to prepare, and presenting a credible alternative and exit strategy as well as plans that serve the social and economic needs of British people.

When ‘constructive’ is actually destructive

So unity for the sake of unity is not only “vomit-inducing”, it’s destructive. While Jones and Collins don’t claim their document has all the answers, they do want discussion in the labour movement. Because Starmer’s ‘constructive opposition’, and the sickening position of others, fails to challenge the Tory narrative and further austerity.