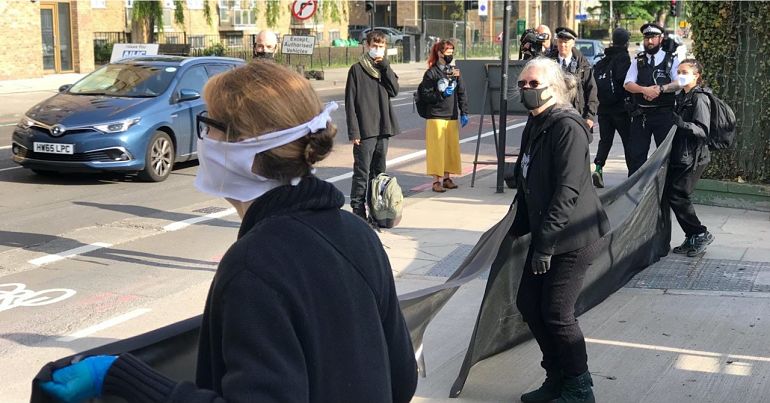 Activists protesting the continued construction of the HS2 high-speed railway have blocked access to building sites in London and Warwickshire. A group called HS2 Rebellion is protesting construction work continuing amid the coronavirus crisis. It’s also protesting the environmental damage this project is doing to “our ancient woodlands”. The group claims this work is non-essential and it’s putting the lives of workers and their families at risk.

Furthermore it believes the money spent on this project would be better spent on health workers. As a result of the Tory handling of the pandemic, health workers remain without the necessary personal protective equipment (PPE) and other critical support, both physical and mental.

While respecting coronavirus restrictions, protesters were threatened with arrest outside the Euston site:

Euston Site protestors being threatened with arrest. Let’s show them our support as they use this socially distanced protest to draw attention to the true criminals @HS2ltd @BorisJohnson . Why are you allowing dangerous construction to go ahead in a pandemic? https://t.co/q60PnobI3Q

A spokesman for the Metropolitan Police said officers were called at approximately 7am on Monday following reports of a protest, alongside members of the British Transport Police (BTP). It says officers engaged with the group but no arrests were made.

The UK went into coronavirus lockdown on 23 March. The government ordered “certain businesses” to close. The exception to this was key providers like supermarkets and retailers offering “essential goods and services”. And while other forms of work can continue, protesters say:

Our nurses and doctors are without PPE, yet these workers can continue because the Government deems them key workers,” said one, in a video posted online.

Our real key essential workers are without PPE because of projects like this.

Protesters held banners reading “NHS not HS2”. HS2 Rebellion did so to highlight the difference between the Government funding this project and the “chronic underfunding” of the NHS. Some protesters scaled a tree using climbing equipment in front of the main building at Euston station and displayed similar banners.

HS2 Rebellion says it has blockaded more than 20 other sites around the UK from London to Crackley Woods in Warwickshire. Protests have also been carried out in the Colne Valley, where an HS2 compound has been blocked since 3 March by demonstrators asserting squatters’ rights at its entrance.

A statement said the group:

[wishes] to emphasise the public resistance to HS2’s destruction of our ancient woodland and wildlife habitats, and HS2’s failure to stop construction works at multiple sites breaching HSE Covid guidelines and exposing their workers, protesters, families and communities to unnecessary risk during a national health crisis.

It came as a former Paralympian was due to appear in court charged with criminal damage at another HS2 construction site. James Brown, 55, was arrested after allegedly climbing a drilling rig to prevent work from going ahead. His hearing has been postponed due to the Covid-19 outbreak and a trial is now due to be scheduled at Uxbridge Magistrates’ Court on 15 June.

Photos coming in from Harvil Road @HS2ltd ‘s site that plans to drill into an aquifer serving millions of Londoners with clean water.

HS2 Rebellion said Brown was due to take part in the protest at Euston on Monday, despite the conditions of his bail forbidding him to be near any HS2 construction sites. Brown said in a statement:

My wife is an NHS doctor, my daughter a carer. I run a charity that supports many of the UK’s most vulnerable disabled individuals.

To see HS2, the most carbon-intensive infrastructure project in Europe, being pushed forward by the Government at this time is infuriating. There’s no rational justification for it.

I cannot sit back and watch this without taking action. I’m going to do all I can to prevent this insane project from going ahead.

Police previously arrested Brown in connection with similar protests by Extinction Rebellion in October. On that occasion he glued himself to the top of an aircraft at City of London Airport.

In a statement, HS2 Rebellion stated it wishes:

to emphasise the public resistance to HS2’s destruction of our ancient woodland and wildlife habitats, and HS2’s failure to stop construction works at multiple sites breaching HSE Covid guidelines and exposing their workers, protesters, families and communities to unnecessary risk during a national health crisis