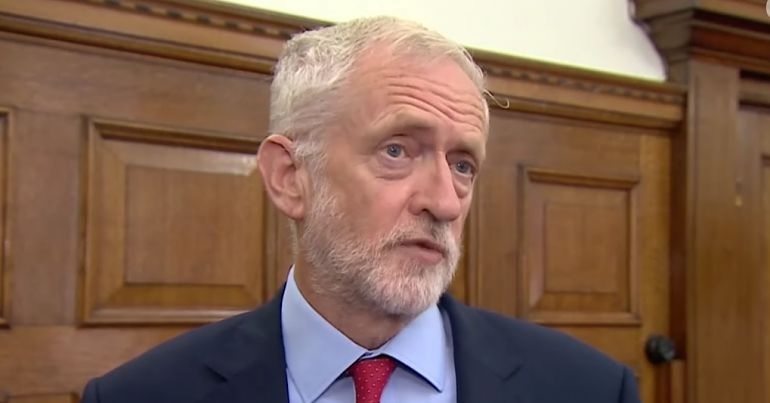 A leaked report by anti-Corbyn group the Jewish Labour Movement (JLM) hit the headlines in December 2019. The report – a submission to the Equality and Human Rights Commission’s (EHRC) investigation into antisemitism in Labour – argued that Jeremy Corbyn’s party was not a “safe space for Jewish people”.

Now a pro-Corbyn network, Jewish Voice for Labour (JVL), has revealed its analysis of the claims JLM made. JVL says its findings “destroy credibility of the vast majority” of JLM’s claims. JVL has submitted this analysis as evidence to the EHRC.

Britain’s establishment press, however, is ignoring this counter-report.

The EHRC announced it would launch an investigation into Labour over antisemitism in May 2019. As ITV detailed in a story on JLM’s leaked claims:

Its remit is to determine whether unlawful acts have been committed by the party or its employees, and whether Labour responded to complaints in a “lawful, efficient and effective manner”.

Meanwhile, the Guardian reported that JLM’s submission contained “sworn statements about antisemitism in the party” from 70 “current and former [party] staffers”. It explained:

In the overarching submission from the JLM, there are detailed allegations of antisemitic abuse at party meetings and by members online…

The Telegraph characterised the submission as a “damning dossier” for Corbyn’s Labour.

Despite the stony silence from Britain’s press, JVL’s rebuttals of the leaked submission are equally explosive. In a press release, it explained:

JVL has produced a detailed analysis of over 150 claims made by the Jewish Labour Movement in their late submission to the Equalities and Human Rights Commission in support of their charge that the Labour Party discriminates against its Jewish members when dealing with allegations of antisemitism.

The investigation claims that “hyper-factional” opposition to the ex-leader among former senior officials was a key factor in hindering effective handling of complaints regarding alleged antisemitism.

JVL takes aim at the selective redactions in JLM’s leaked submission too:

Hiding the names of accusers and the evidence they presented while publishing the names of those they accuse of antisemitism puts the reputations and even the personal safety of those accused on secret evidence at risk.

Overall, JVL says that the JLM submission is “largely worthless” because it “depends so heavily on the selective use of prejudiced gossip, distortion, double standards and presumption of guilt without investigation”.

JVL provides a number of examples to back up its claims – alongside an executive summary of its analysis. For example, the JLM documented the following in its submission:

After Ruth Smeeth MP was forced to walk out of the launch of the Chakrabarti Inquiry Report following harassment by Marc Wadsworth (for which he was eventually expelled from the Party, some two years later), she was the subject of over 25,000 antisemitic posts and messages.

This incident happened on 30 June 2016, when Labour member Marc Wadsworth commented at a press conference that he’d seen a Telegraph journalist handing a press release to MP Ruth Smeeth, suggesting they were working “hand-in-hand”. Smeeth is Jewish, which Wadsworth said he didn’t know at the time. As the JLM submission noted, Smeeth walked out of the press conference. But JVL says she wasn’t forced out, rather she “left of her own accord”, as video evidence shows.

It questions the claim that Smeeth received 25,000 antisemitic posts and messages, saying:

This volume of online abuse was not picked up by three surveys that were undertaken at the time: one by the Community Security Trust, one by Salford University and one by Amnesty, all finding nothing like the volume of messages that she had reported.

In addition, no data appears to have been produced to show how many of these messages emanated from Labour Party members.

The Canary approached JLM for a response to the claims in JVL’s submission but received no reply by the time of publication.

In contrast to the enthusiastic coverage provided to JLM’s leaked submission, however, JVL’s rebuttal has received very little attention in the media. That’s despite the fact that the British press hasn’t lost interest in stories regarding Labour and antisemitism. Outlets widely covered a recent Zoom meeting attended by Labour MPs and suspended party members: a story which had antisemitism allegations at its core.

But this challenge to the argument that Corbyn’s Labour was an unsafe space for Jewish people isn’t getting a look in. Any community contains a range of views and the Jewish community is no exception. By focussing so exclusively on one section of British Jewish opinion, the UK’s media is failing to reflect this.