If and when a second wave comes, blame the government not protesters - The Canary 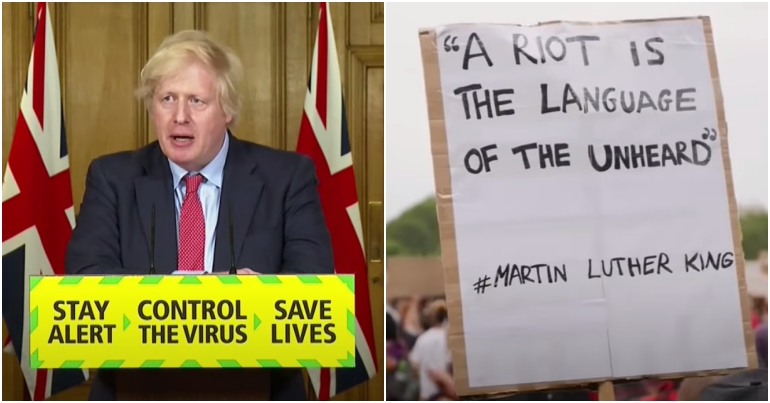 In both the UK and the US, the government’s response to the coronavirus (Covid-19) crisis has been tragically incompetent. From locking down too late to unlocking too early, the devastating death tolls both countries have seen could have been avoided.

It didn’t have to be this way. And whether it’s Boris Johnson, Dominic Cummings, or Donald Trump, the responsibility for this horror lands directly on their doorsteps.

Throughout the pandemic, the UK government has been gaslighting us; attempting to change the narrative, rewriting history, and hoping we don’t notice. Now many experts believe a second wave is inevitable. And our so-called leaders will have new bogeymen – the Black Lives Matter protesters.

It’s vital we get ahead of that narrative now. If and when a second wave comes, we need to make sure that the Tories and the establishment media don’t blame this on the people rightly taking to the streets. We need to make sure it’s their policies and lack of action that’s held firmly to account.

“The nation has lost its fucking mind”

Back before George Floyd‘s death became a catalyst for the outpouring of rage against the systemic racism that is rampant across the US and UK, experts were warning that the loosening of the lockdown would cause a second wave.

Just watched the conga lines / street parties on the news. The nation has lost its fucking mind. We’re strapping in for the second wave. I’m so, so tired, and so pissed off. We’ve had a few days of respite and I was starting to feel hopeful. Can’t believe I was so naive.

Writing in the Guardian on 12 May, prof Devi Sridhar, chair of public health at Edinburgh University, set out the problems facing the government in easing the lockdown and what the challenges are:

Now, the key challenge facing the government is to replace this lockdown with a package of public health interventions involving mass testing, surveillance and real-time data to identify clusters of the virus and quarantine those who are infected.

But these measures aren’t in place. The contact tracing system is flawed, or, in the words of the Daily Mail, “in chaos”. And Sridhar highlighted:

Without these measures in place, the past seven weeks of lockdown will have been completely pointless. As quarantine measures are lifted, the virus will continue to spread, the number of daily cases will rise and a second peak will become inevitable.

Too little too late and too much too soon

The government’s handling of the pandemic was incompetent right from the start. According to prof Neil Ferguson who advised the government about when to go into lockdown:

Had we introduced lockdown measures a week earlier, we would have reduced the final death toll by at least a half.

Now we have a government that is prioritising the economy over lives; a government that can no longer even pretend to claim it’s following the science. On 10 June, Johnson announced the next steps in releasing the lockdown – “support bubbles”. This is on top of some businesses opening, some children going back to school, and other relaxation of the rules which have seen packed beaches and parks.

But the UK’s daily death rate is still one of the highest in the world and the risk from coronavirus hasn’t decreased. On 10 May, Johnson announced a new “five-tier alert system” designed to let us know the stage we’re at in fighting the virus, and a measure of when restrictions could be eased. On 10 May, the alert level was four. A month later, and the level remains the same. But despite this, the government is continuing to ease the lockdown measures.

Meanwhile, the BBC reported on 5 June that the Joint Biosecurity Centre (JBC) is “now up and running, according to the government.” The JBC:

The JBC has an “insight team” which will monitor local spikes of Covid-19 and advise health officials and local authorities.

But according to Civil Service World on 8 June, the JBC:

will not be at full operational capability until “later this summer”

And health secretary Matt Hancock stated that it:

So no, a second wave won’t be the fault of protesters

People are on the streets because they have no choice. Systemic racism – whether from policing or from coronavirus – is killing people. People are fighting for fundamental rights. And yes, the middle of a pandemic might not be the best time for a mass movement, but that doesn’t make it any less necessary. As Dr Lukmon Babajide, a US doctor who joined the protests, stated:

Covid will not kill you as fast as a bullet.

We also need to look at the fact that it’s often policing that makes it impossible or harder to social distance on protests. In London, the Met have kettled protesters. In other words, people have been forced into a tight space and forced to remain there. Nothing could be worse.

So, if and when a second wave comes, don’t blame the protesters. Don’t fall for the inevitable narrative Johnson and Trump will parrot. They have prioritised money over people’s lives. Too little action was taken too late and restrictions have been eased without the evidence or tools needed to control the pandemic.

We are potentially facing an even bigger tragedy than the one we’ve already lived through. If it happens, the anger and the grief we feel must be directed towards the right people, and they’re the people we must hold to account for what happens next.