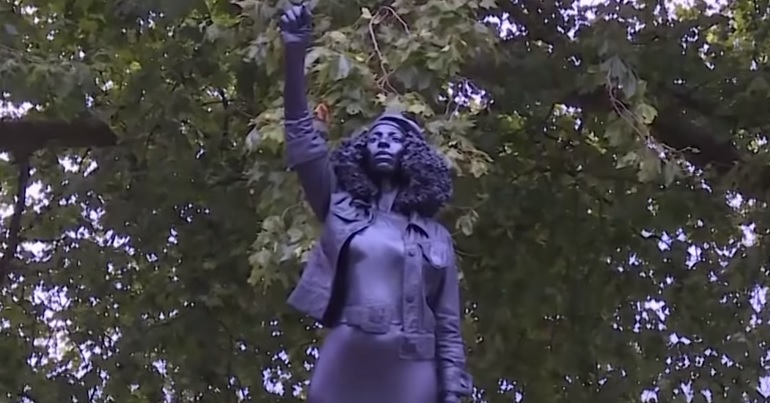 Am waking my girls up early so I can show them this. What a thing of beauty. What a thing to wake up to. Thank you #MarcQuinn and team #FifthPlinth https://t.co/Q5KZ5IsZMo

Another person posed in front of the statue and tweeted:

A sense of belonging

While police continue to brutalise and discriminate against Black people, and while they continue to be disproportionately disadvantaged and underrepresented in pretty much every sphere imaginable, public statues can understandably be seen as a side issue. But the art we value speaks to who, as a society, we deem important – and who we don’t. Reid told the Evening Standard:

This sculpture is about making a stand for my mother, for my daughter, for black people like me. It’s about black children seeing it up there.

It’s something to feel proud of, to have a sense of belonging, because we actually do belong here and we’re not going anywhere.

Raising a fist in empowerment

The future of the plinth and what is installed on it must be decided by the people of Bristol.

This will be critical to building a city that is home to those who are elated at the statue being pulled down, those who sympathise with its removal but are dismayed at how it happened and those who feel that in its removal, they’ve lost a piece of the Bristol they know and therefore themselves.

But the groups he mentions do not have an equal stake in this matter, and their opinions should not hold equal weight. As Reid said:

Having to see that statue daily does something to you. Knowing what Colston represented, I felt compelled to take a stand and raise my fist in empowerment for the slaves who died at his hands.

Passing every day beneath the effigy of a man who stood for the dehumanisation – and commercialisation – of an entire ethnic group of people must have a very obviously harmful effect. Particularly for Black people as the descendants of those affected by slavery. Our statues and public spaces whisper that, however long it has been since Britain abolished slavery, whatever we preach about equality, pretty much nothing has changed.

According to the BBC, the Public Monuments & Sculpture Association (PMSA) has 610 public statues of named people on its database. But the BBC said:

Of these, just three are of black individuals – two of Nelson Mandela and one of Desmond Tutu

This record isn’t complete, to be fair. The same article cites another 11 named statues of Black people, and estimates that there are “at least 15 outdoor statues of named black individuals in the UK”.

But even this woeful lack of representation isn’t the whole problem. As British artist Larry Achiampong pointed out in a video:

the situation with the Marc Quinn sculpture is… a sad joke, one that is not funny. The point of all of this is about the redistribution of equity, of power. So by simply just putting up a sculpture that, yes, looks way better, is not enough. Who’s being given the opportunity? Who’s being given the chance?. … Why not actually support some young Black artists to make something and to put something up there?

How very well said. This #marcquinn sculpture has “nothing to do with the redistribution of power” I’ve seen this shared widely on Instagram, good to see it here too 🔥 🙌🏾✊🏾#larryachiampong https://t.co/ccg2pxL3iL

racism runs far deeper than representation. In actuality, the insidious nature of racism affects Black people’s access to opportunity and resources. This is why there are so few Black sculptors working in the public realm and less so ones with the finances to immediately take advantage of the opportunities that arise.

It will come as a shock to those of us whose skin has enabled us to take so much for granted for our entire lives, but it’s simply not our turn.

Get off the plinth

We need to keep giving way until we understand that we are not, nor have we ever been, the only source of authority or expertise on any of these matters. We’re just the ones holding the megaphone.

We need to dig deeper in and keep pushing so we don’t turn this moment into a “fucking festival”, as Achiampong says.

Because we cannot afford, as a nation or a planet, to go another tokenistic round of hashtags and solidarity badges before we slip back into our old patterns and grooves. “Sometimes,” says Achiampong, “the best thing that you can actually do when you’re part of a problem is just stop”.

Right now, we need to shut up and pass the megaphone to our Black and Brown siblings. We need to get off the plinth.