The NHS is now on the chopping block. And it shows why reforming capitalism is an exercise in futility. - Canary Workers’ Co-op 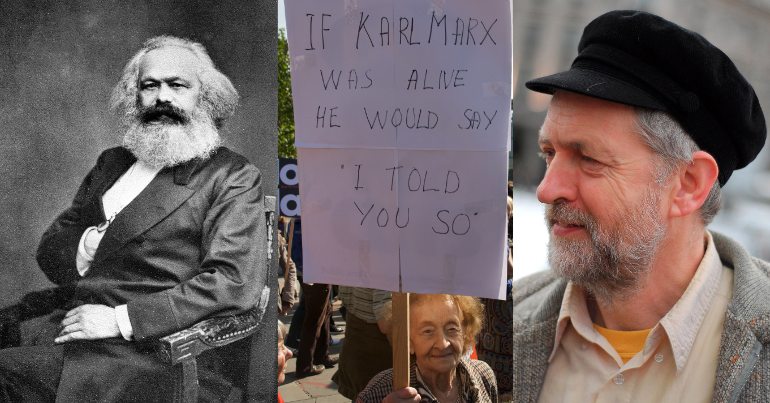 The Canary recently reported that Tory MPs defeated an amendment which would have committed the government to protect the NHS from privatisation in a new trade deal with the US.

This raises the obvious question of whether we’re about to see the end of the NHS’s founding principle of ‘free at the point of service’. But there’s also a more elementary question worth exploring – whether it’s even possible to maintain social reforms like universal healthcare when economic decision-making remains in private hands. With corporate power over political systems becoming more entrenched and the media serving as its mouthpiece, the answer to this question increasingly seems to be a resounding ‘no’.

On 20 July, Tory MPs voted down an amendment to the Trade Bill introduced by Labour’s shadow trade secretary Bill Esterson. The measure would have prohibited parliament from voting in favor of a trade deal with the US that “undermines or restricts” the NHS’s principle of universal care. It also contained provisions that would ensure the UK’s ability to set its own medicine prices. This would be an alternative to the US-style system in which the government doesn’t negotiate directly with the drug companies.

Tory MPs claim that the NHS is ‘safe in their hands’, but there are many reasons to doubt the sincerity of this claim. Not least of these is that the Conservative Party has been notorious for attempting to privatise the system by stealth.

The Blairite position is that the solution is to offer a ‘credible’ centrist alternative which pledges to safeguard the NHS and increase public investment – sometimes called the ‘Third Way’. This narrative is essentially a watered-down version of ‘social democracy’, which is itself a watered-down version of democratic socialism. Social democracy holds that the negative effects of capitalism can be redressed in the short- to medium-term. This can be done through the provision of social protections and public services, but without immediate nationalisation of large swathes of the economy or the pursuit of widespread economic democracy.

To be clear, Blairites are neither socialists nor social democrats. Because unlike the latter, they don’t view reforms to capitalism as incremental stepping stones towards its replacement. But like social democrats, they believe that social reforms can continue to exist over long periods under capitalism. And they would have us believe that if the Tories do succeed in dismantling public healthcare in the UK, it would simply form part of an ongoing ideological tussle – one between the ‘pro-public services’ Labour Party and the ‘pro-market-based solutions’ Tories.

The major rivals to this idea, of course, are traditional democratic socialists like Jeremy Corbyn. Corbyn, along with a small number of key allies in parliament such as John McDonnell, has always rejected the ideological tenets of Blair’s Third Way. Corbyn and his allies have continued to argue that building a society that works for all must ultimately involve not just cosmetic reforms, but a fundamental break from capitalism.

According to socialists, this is because social democratic reforms are ultimately unsustainable within a largely privately-owned and managed economy. Rather, we believe that these reforms can only be maintained within a socialist economy and society.

Setting the record straight on Marxism

There are a number of reasons why. Though most socialists in a 21st Century context are not Marxists in any orthodox sense, we nonetheless recognize that many predictions made by Marx, and subsequent Marxist thinkers, have turned out to be accurate. For instance, the Australian Marxist scholar Ashley Lavelle has, for many years, argued that the social gains of the post-war period (1945 and onwards) were only possible under capitalism for a unique and comparatively small period in human history.

For Lavelle, the post-war boom brought about by massive public spending as part of the war effort represented a form of Keynesian stimulative government spending that no capitalist government would ever replicate in peacetime. As time goes by, Lavelle argues, governments that seek only to manage capitalism, including a Blairite Labour government, will always struggle to provide the kinds of social protections and public services that were originally envisioned by the founders of social democratic and labor parties. For Lavelle, this is because capitalism is now entering a terminal phase of decline and ever-worsening crisis.

The threat of growing corporate power

Another factor that Marxist scholars have pointed to is growing corporate power. In advanced capitalist economies, large corporations end up dominating the economy to such an extent that they have more power than governments. In fact, corporate power has become so concentrated in some countries that they have arguably caused a form of state capture. This is where the state acts at the behest of private business interests rather than the public.

This process is particularly evident in the US. Corporations openly buy politicians’ influence to such an extent that practically no one can get elected in the US without corporate support. Socialists believe that these private interests will always work to undermine social democratic reforms like universal healthcare. Of course, this will only get easier and easier for corporations to do as their power continues to increase.

Finally to consider is the issue of the media, along with the wider world of publishing, culture, and entertainment. Marxist theorist Antonio Gramsci argued that under capitalism, society’s dominant class builds consent for the continuation of the status quo via a process he termed ‘cultural hegemony‘. Basically, this means that society’s major cultural organs and mass media characterise what is in the interests of that dominant class as ‘common sense’.

Gramsci was writing in the early 20th century, but much of what he described pertains to the situation we find ourselves in today. The classic example is Corbyn’s leadership of the Labour Party. At first, Corbyn was presented as an eccentric aberration from British politics. One caused by a left-wing party membership throwing a temper tantrum after years of disappointment with Blairite leadership. However, following the 2017 election, in which Corbyn presided over the biggest increase in Labour’s vote share since 1945, it became evident that his policies had significant public support.

Turning reality on its head

The ruling class then realised that Corbyn could indeed become prime minister and quickly went into panic mode. With the UK media overwhelmingly controlled by the ruling class, thanks to majority corporate and billionaire ownership, it then launched an all-out disinformation campaign to stop Corbyn and the political insurgency he represented.

In doing so, it literally turned reality on its head. Corbyn, a lifelong anti-racism campaigner and early supporter of the anti-Apartheid movement, got branded a dyed-in-the-wool racist. This was done via a transparently manufactured and politically-motivated smear campaign based on bogus accusations of antisemitism.

Meanwhile, Conservative leader Boris Johnson, a bumbling buffoon of a man whose lifelong racism and other prejudice is very-well documented, and ironically even includes writing a novel with some suspiciously antisemitic tropes, was largely given a free pass. He even had his image transformed from the lovable rogue of his TV and backbench years to that of a serious political figure. Just a few years before, even his own fellow Tory MP Kenneth Clarke had said “The idea of Boris as prime minister is ridiculous”.

Living in a fantasyland

Evidently, any sense of political reality has overwhelmingly given way to a fantasyland. One conjured by the ruling class, and its minions in the media, to keep us blinded to our own interests. And increasingly, this isn’t just an issue of class. As Noam Chomsky has pointed out, the impending climate chaos caused by unfettered globalized capitalism doesn’t just threaten the wellbeing of the world’s least well-off. It’s also a threat to the viability of continued organized human life itself – which obviously includes everyone, rich or poor.

Make no mistake, aiming solely for cosmetic reforms to capitalism is akin to trying to stop a haemorrhage with a plaster. Tinkering on the edges will only hasten the impending dystopia of climate chaos and the decimation of the few social protections and public services that we still have left.

Finally, all of the above raises the question of whether those of us who wish to avoid this dystopia should limit ourselves to struggle only within the established constitutional frameworks of the countries in which we live. Being a democratic socialist, in this day and age, is beginning to seem like a contradiction in terms. If the left is not going to get a fair shake at democratically enacting our policies due to a media and cultural landscape that poisons the minds of the masses, then perhaps it’s time we turn to extra-parliamentary forms of struggle – before it’s too late.