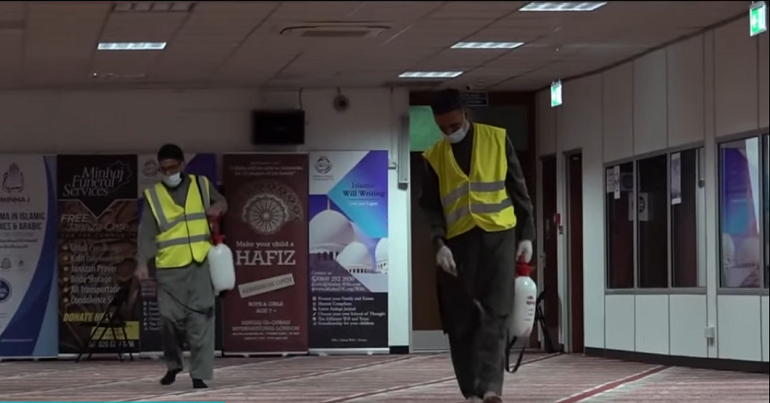 For Muslims up and down the country, Friday 31 July would have been a particularly special Eid to celebrate, being able to spend it with family after the last Eid was in stricter lockdown conditions, and coming together as many have lost loved ones to coronavirus (Covid-19).

However, mere hours before midnight on 30 July, the government announced that “members of separate households are banned” from meeting indoors from midnight “in Greater Manchester, parts of Lancashire and parts of West Yorkshire”.

This message felt racially motivated. One that perpetuated the narrative that Asians in northern areas especially are a ‘problem’ that requires governing in a different, stricter way. This was quickly reinforced by an article in the Guardian which featured a racialised photo of an Asian woman in traditional dress to represent northern areas.

Yet if we were to draw parallels, past articles discussing the same region have featured images of white people. Similarly, racialised imagery was used by the Guardian, as well as Sky News and Financial Times, for reporting on Leicester’s lockdown, and is a clear dog-whistle to racists.

Then, to make matters worse, Tory MP Craig Whittaker went on LBC on 31 July to suggest that “it is the BAME communities that are not taking [coronavirus] seriously enough”. Presenter Ian Payne, meanwhile, pointedly set up the question to ask, more than once, whether ‘the Muslim community’ was to blame. Let’s not forget that ‘Muslim’ is a racialised term, with the overwhelming majority of Muslims also coming from a Black, Asian and Minority Ethnic (BAME) background.

This cycle of BAME people being blamed by politicians and the media for the spread of coronavirus, and on a related note, for their disproportionate death rate from the virus, is a malicious, divisive tactic. It draws from colonial prejudices of BAME communities as being dirty and a threat to white British society. It fails to consider the root cause of these higher death rates, such as larger, working class families living together in small housing conditions along with older family members, or the fact that they’re over-represented in certain high-risk fields.

The hypocrisy and double standards of the media and politicians is that white communities aren’t stigmatised for their response to coronavirus, unlike BAME communities. During the past few weeks, we’ve seen plenty of examples of white people breaching government lockdown regulations.

Where was this same energy in the media for highlighting the many white people refusing to wear face masks in public, despite it being mandatory? Or for all the illegal raves, and clearly not social distanced beach visits and VE Day celebrations? Moreover, the government was keen to brush Dominic Cummings’ little road trip during lockdown, made while he had coronavirus symptoms, under the carpet. He is yet to be held accountable for his actions.

It keeps getting worse

Despite the Black Lives Matter protests, and all this country has been through in dealing with the virus, it’s evident that the media and politicians are among the biggest perpetrators of racism. This keeps being proven regardless of what they claim otherwise. You’d think that recent events would motivate this country to address and eliminate racism – instead, it keeps getting worse.

I want us to be able to unite together. But with the constant dog-whistling and playing on stereotypical tropes, I fear that BAME communities are only being exposed even further to both covert and overt/violent racism.

It’s simply not acceptable for an MP to brazenly use divisive language, or for mainstream media to continue their double standards and hypocrisy. And we shouldn’t have to put up with it – speaking out is the only option.