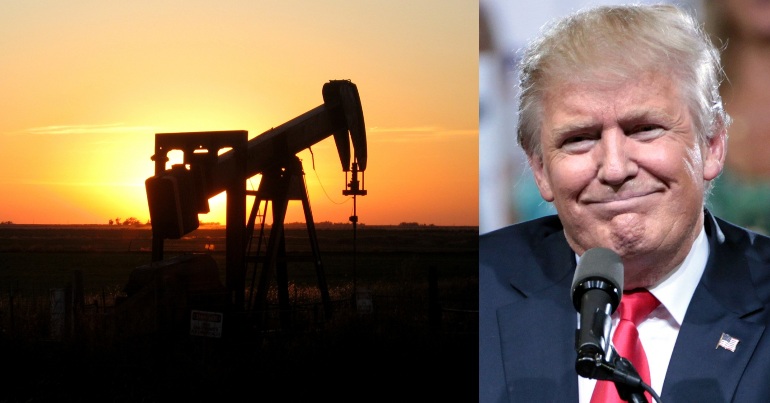 US President Donald Trump has just opened the door to massive exploitation and despoliation of one of the US’s largest nature reserves. The move has been met with fierce resistance from environmental groups, but only mild rebuke from most Democrats in congress. We shouldn’t be surprised, however; the US essentially has two major right-wing parties that both support the continuation of the capitalist economic system that ruthlessly exploits people and planet alike.

But there is something deeper at play as well. This move also shines a revealing light on the warped philosophical underpinnings of the capitalist conception of nature. And this, in turn, shows the need for a radical transformation of humanity’s relationship to the natural world that goes well beyond cosmetic reforms or simply regulating the status quo. Rather, we need to question the viability of endless economic expansion and consider whether it’s time to give part of the planet back. And there are important lessons that we can learn about how we might do so from non-Western societies and their philosophies of nature.

Opening up the Coastal Plain

On 17 August, the Trump administration announced that it would open up a large part of the Arctic National Wildlife Refuge (ANWR) in Alaska to drilling by resource extraction corporations. Known as the Coastal Plain region, the area represents around 1.5m acres out of the refuge’s total of just over 19m. The Alaska National Interests Lands Conservation Act of 1980 formally established the ANWR as a refuge and designated about 8m acres as wilderness areas. Many animal species inhabit the vast tract of land including caribou, gray wolves, arctic foxes, and various species of bear.

Trump administration officials are touting job creation and economic growth as the main benefits of the proposal. Trump’s secretary of the interior David Bernhardt, a former oil company lobbyist, said that it would “create thousands of new jobs and generate tens of billions of dollars”. Environmental groups, meanwhile, have been criticizing the move as a threat to animal species and an exacerbator of global warming. The executive director of the Center for Western Priorities said:

Bernhardt is approving a plan to despoil America’s wildest landscape for oil that we will be using less of in coming decades, all for the benefit of his former and future clients.

Establishment Democrats in congress, however, have been suspiciously muted in their criticism. Though the party is currently opposing the move in the House of Representatives, where it holds the majority, members have largely criticized the Trump administration only on thin procedural grounds, rather than condemning the proposal outright. The Hill, for instance, reported that some Democrats have criticized Trump for “not being sufficiently thorough in its assessment” of the potential damage to wildlife.

This in turn should come as no surprise given that such corporations give large amounts in campaign contributions to both Republicans and Democrats. Needless to say, they don’t do it out of the goodness of their hearts but rather to influence the political process to their advantage. As a result, congress members of both parties now legislate more to the benefit of these private interests than those of the wider public, let alone those of the environment and other species of animal.

A philosophical as well as an economic problem

But beneath this shameless pandering to the fossil fuel industry lies something even more unsettling. Central to the political philosophy of both parties is the notion that the solution to all the world’s problems is more economic growth and ‘job creation’. Though Democrats have usually been marginally better than their Republican counterparts on environmental policy, they still nonetheless tacitly support this same basic premise.

Their solutions, meanwhile, are usually to merely better regulate the activities of the industries that plunder nature and/or enact superficial reforms such as promoting so-called ‘corporate responsibility’ (a contradiction in terms). But the reality is that far more radical action is needed to stem the coming climate chaos.

In spite of being dismissed by right-wing voices as ‘alarmist’, the predictions made by scientists about impending climate breakdown have, if anything, proven to be too modest as time goes by. As the New York Times reported in November 2019:

For decades, most scientists saw climate change as a distant prospect. We now know that thinking was wrong.

Had a scientist in the early 1990s suggested that within 25 years a single heat wave would measurably raise sea levels, at an estimated two one-hundredths of an inch, bake the Arctic and produce Sahara-like temperatures in Paris and Berlin, the prediction would have been dismissed as alarmist. But many worst-case scenarios from that time are now realities.

A 2019 report by the Intergovernmental Science-Policy Platform on Biodiversity and Ecosystem Services (IPBES), meanwhile, concluded that the number of species at risk of extinction is over a million. There is overwhelming evidence that this species decline is mostly being driven by human economic activity. So much so that journalist Elizabeth Kolbert has dubbed anthropogenic species decline ‘the sixth extinction’, which formed part of the title of her 2014 book on the subject.

Giving back to nature

In response to this reality, evolutionary biologist E.O. Wilson suggests in his book Half Earth: Our Planet’s Fight for Life that humanity should give half of the planet back to nature. And as environmental publication Earth360 pointed out earlier this year:

Once thought of as aspirational, many are now taking these ideas seriously, not only as a firewall to protect biodiversity, but also to mitigate continued climate warming.

Clearly then, human societies should now be organizing a strategy of withdrawal from the natural world rather than further expansion. And this reality points to a fundamental problem with the philosophy upon which Western expansionist capitalism is based.

The Western mentality at the heart of the problem

As environmental scholar Michael Klare pointed out during an exclusive interview with The Canary earlier this year:

the Western mode of thought, the capitalist mode of thought, which many evangelical Christians also share, is that the Earth was given to us to exploit in any way we wish, that humans are the master of the planet, and we could use our ingenuity to our benefit to exploit its riches and abuse in any way we thought, without paying a price for that. And Mother Nature is telling us, I believe, that that’s not the case; that there are limits to what humans can do to the planet. And when we abuse those limits, when we transgress, there will be punishment, [and] prices to pay.

Perhaps inevitably, pre-Christian and pre-capitalist societies have often developed some intriguing alternative views for what relationship humanity should have with nature. Some philosophies of the native cultures of Latin America, for instance, hold that human beings are simply a part of nature existing within it rather than something existing above and separate from it.

The influence of these philosophies is palpable across the region to this very day. In Bolivia, the indigenous cultures that are at the cutting edge of the country’s progressive social movements have long revered Mother Nature (or Pachamama, as it’s locally known) as something that deserves profound respect and protection. Likewise in Ecuador, the indigenous Waorani people of the Yasuni National Park were instrumental in persuading the country’s government to set up a special trust fund, administered by the UN Development program, that receives money in exchange for leaving oil reserves within the park’s grounds unexploited.

Latin America leading from the South

It’s also no coincidence that Latin America has been a global leader in working toward sustainable development. In 2006, a report produced by the World Wildlife Fund found that Cuba was the only country in the world to meet its definition of sustainable development. This finding was independently verified by research conducted by anthropologist Jason Hickel. Of course, unlike Western countries like the US and UK, Cuba organizes its society on the principles of socialism rather than unfettered neoliberal capitalism.

And it’s this latter extractive, exploitative, and life-destroying economic system that truly lies at the heart of planetary meltdown. And since the establishment wing of the US Democratic Party appears to believe that the intrinsic failures of this system can somehow be regulated or reformed away, at a fundamental level, they appear to be not much better placed than Trump and his Republican minions to address the coming climatic catastrophe that humanity faces.

As sociologist John Bellamy Foster put it in his 1999 book The Vulnerable Planet: A Short Economic History of the Environment:

The chief causes of the environmental destruction that faces us today are not biological, or the product of individual human choice. They are social and historical, rooted in the productive relations, technological imperatives, and historically conditioned demographic trends that characterize the dominant social system.

Hence, what is ignored or downplayed in most proposals to remedy the environmental crisis is the most critical challenge of all: the need to transform the major social bases of environmental degradation, and not simply to tinker with its minor technical bases.

In short, this latest move on Trump’s part is certainly sickening, but to argue either that poor environmental policies began with his presidency, or that he is in some kind of league of his own in terms of reckless contempt for environmental well-being, is to miss the fundamental reality that only whole-cloth systemic change will avert the coming apocalypse. Unless radical action is taken immediately to alter our economic paradigms, we might soon learn for ourselves what the endgame of unfettered globalized capitalism truly looks like.