Murdoch family mobilizes behind Joe Biden. And it's not the first time pseudo-progressives have courted the corporate media. - Canary 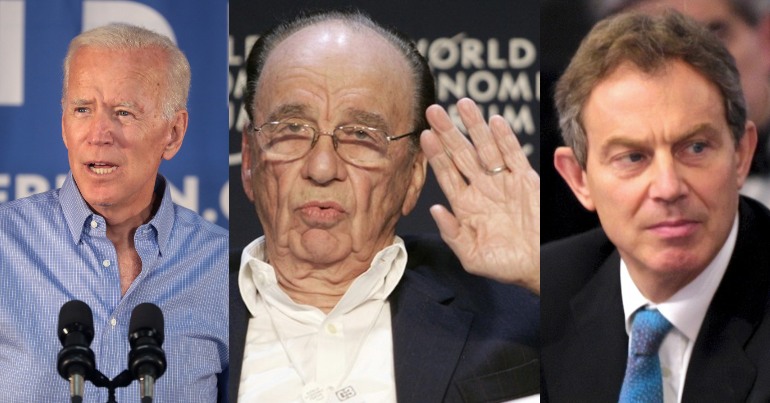 The Canary has previously reported on some of Joe Biden’s eyebrow-raising backers from the world of politics. The fact that his presidential campaign is receiving money from such quarters casts serious doubt on his already highly dubious progressive credentials. Now, emerging reports that he’s also receiving campaign contributions from family members of one of the world’s wealthiest corporate media barons could hammer the final nail into the coffin of his credibility.

Money from the Murdoch family

On 16 July, Salon reported that the son and daughter-in-law of media magnate Rupert Murdoch gave over $600,000 each to the presumptuously named ‘Biden Victory Fund’. The fund splits the money it receives between Biden’s presidential campaign, the Democratic National Committee (the party’s governing body), and various state-level party structures.

Reporters obtained the information from Federal Election Commission filings, which show James and Kathryn Murdoch also giving to other Democratic Party candidates. The Washington Post reported that they are “increasingly giving to Democrats this cycle, including $1 million to help Senate Democrats”.

This should raise alarm bells amongst progressives, given that Rupert Murdoch is the owner of multiple right-leaning news organizations. His son James has been involved in many of their operations, including the phone-hacking scandal in the UK. In a competitive field, perhaps the two most notorious of them are the US TV channel Fox News and the UK’s gutter tabloid the Sun.

Along with marginally more highbrow, and slightly less unhinged, Murdoch-owned outlets such as the Times and the Wall Street Journal, these publications have been at the cutting edge of cheerleading for right-wing causes for decades. These include, but aren’t limited to, gutting the social security system and engaging in foreign wars of aggression. Fox News, in particular, has since its founding in 1996 served essentially as the propaganda arm of the US Republican Party.

So what could explain members of Murdoch’s family mobilizing behind someone who’s presented in the mainstream media as at least a nominally progressive US political figure? The first reason, as The Canary has previously argued, is that the US now has two right-wing major parties. And these parties essentially represent rival wings of the same imperialist and neoliberal status quo of endless war abroad and constant austerity at home.

But there’s more to it than that. Trump has certainly obediently served traditional Washington foreign interests while in office. But he’s nonetheless unique in that he has, at least on occasion, paid some lip service (empty though it has been) to the possibility of halting the US’s seemingly unending foreign military escapades. Biden, on the other hand, arguably represents a more steady and reliable set of hands for managing the US’s vast imperial apparatus. And this is why Bush-era neocons are also now funding his campaign.

This latest episode also shines a light onto the interaction between the media’s relationship with political parties on both sides of the Atlantic that (at least publicly) claim to be progressive. Because the right wings of the Labour and Democratic parties claim that the only way to be electable is to pivot to the center (or, in reality, the center-right) by offering the electorate a neoliberal-lite domestic platform along with full-strength neoconservative foreign policies.

Based on a completely false premise

But this narrative is completely misleading. And as we will see, it serves an important function in maintaining the status quo and defending the interests of corporations and wealthy individuals.

First of all, it assumes that the media landscape is fixed, immutable, and impervious to any kind of change. And this notion is only true so long as a country’s elected representatives allow it to be. The reality, however, is that media reform has proven both achievable and beneficial in terms of diversifying public discourse, facilitating more balanced debate, and promoting alternative and community media.

Looking to the south for inspiration

The Latin American countries of Ecuador and Uruguay, for example, have been pioneers of media reform in the 21st Century. These countries launched programs of media reform that challenged their previously corporatized and overwhelmingly right-leaning press. As a result, new community-based media thrived and the public square benefited from a greater diversity of points of views.

If media reform is possible in Latin America, then one can only wonder why it’s never been attempted in the US or UK, especially during previous Democratic or Labour party governments. The answer to this is that recent presidents and prime ministers from these parties (particularly Barack Obama, Bill Clinton, and Tony Blair) were ideologically in support of neoliberal domestic policies and neoconservative foreign policies.

But the neoliberal Blairites and Clintonites would never do so

So rather than making any effort to push for radical media reform that would challenge the dominance of the Rupert Murdochs of this world, they instead cozied up to them – all while claiming publicly that moving to the right was the only way to win. The classic example is Blair, who was famously pictured on the front page of the Sun reading an early edition shortly before his victory in the 1997 UK general election victory. It later emerged that he had entered into a secretive deal with Murdoch. The deal was that the multi-billionaire tycoon would be “left to pursue his business interests in peace” in exchange for “giv[ing] Labour a fair wind”.

Incidentally, this building of relations with the corporate press coincided with these leaders receiving large sums of money for their political campaigns from figures with the same kind of interests and worldview as Murdoch. Obama, for example, received more from Wall Street than his Republican opponent John McCain during the 2008 presidential election cycle. While Blair was leader of the opposition, meanwhile, the Labour Party received a donation from the notorious motor racing figure Bernie Eccleston.

So getting into bed with Murdoch and others from the corporate-owned press was just a duplicitous three-card trick to advance their own interests, and those of their wealthy backers. When figures that actually do support progressive change, like Bernie Sanders and Jeremy Corbyn, emerged as major political players, on the other hand, the political heirs of Blair, Clinton and co did everything they could to derail their hopes of winning power.

In short, no one should be surprised that Biden is now taking money from the Murdoch family. This relationship between center-right neoliberal Democrats and the corporate media is nothing new in the US, just as it’s nothing new on the part of Blairites in the UK. Both countries now lack a center-left social democratic party that challenges neoliberal and neoconservative hegemony. And that raises difficult questions for those of us who oppose the status quo of never-ending war, austerity, and ever-diminishing civil liberties.