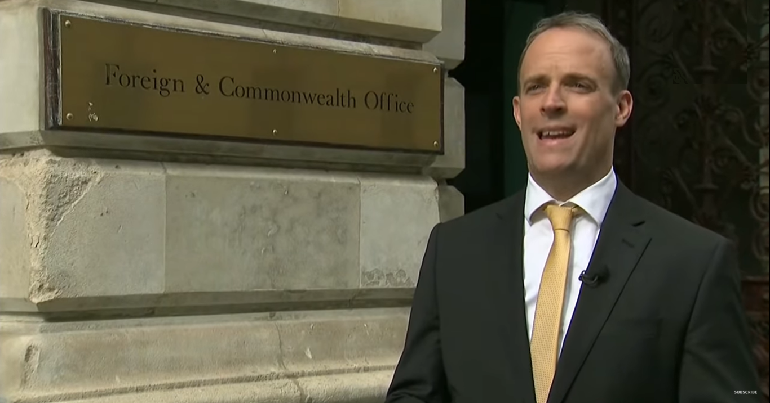 The timing of Raab’s recent intervention is interesting. It comes only days before the Intelligence and Security Committee (ISC) is expected to publish its long delayed report on Russian interference into UK politics. Moreover, in his statement, Raab failed to mention the source of the research that fuelled the pro-Tory media claims of collusion with Russians.

Let’s deconstruct this. What Raab is really saying is that he’s not completely sure if Russians (who are not necessarily acting on behalf of the Russian state) may have publicised the documents. Nor is he saying the documents were hacked, rather they were leaked. And at no point does he question the actual authenticity of these documents which suggest ways in which NHS services could be opened up to US privatisation.

That same day, Raab registered a written question on the matter, implicitly admitting that Corbyn’s ‘crime’ was merely to reveal the documents to the British public:

When these [leaked documents] gained no traction, further attempts were made to promote the illicitly acquired material online in the run up to the General Election.

What Corbyn really did

Corbyn had come upon the un-redacted versions of the documents on US-UK trade talks thanks to Global Justice Now. On 27 November 2019, he famously revealed a redacted version of these documents:

What the documents said

The documents recorded secret talks between the Conservative government and the US over post-Brexit trade relations. There were reports on six rounds of talks: one, two, three, four, five and six. Each report was headed ‘Department for International Trade’ and marked “OFFICIAL – SENSITIVE”.

The reports covered a range of topics. For example, there’s this intriguing statement on pages 42 and 43 of the second report:

The US understood that the UK used PRTs [pathogen reduction treatments, such as chlorine] until 2003, and wondered if there would be an interest in bringing them back post-EU Exit.(13-14 November 2017)…

US to share their public lines on chlorine-washed chicken to help inform the media narrative around the issue.

Or this on page 48, again in the second report:

The US said there is a lot of conversation on drug prices and looking at what other countries pay and this is causing angst. There are worries that the US is not getting a good deal in pharmaceutical industries.

The real source of the smear against Corbyn

The explosive contents of the leaked reports should have been highly damaging to the Tories. But that did not happen and, instead, the spotlight fell on Corbyn and the Russians. That was likely due to the intervention of a largely unknown cyber research group, called the Digital Forensic Research Lab (DFRlab). That group is a research arm of the arch-conservative Atlantic Council. The Council, formerly known as the Atlantic Council of the United States, covers a range of pro-Atlanticist issues and programmes.

The Foreign and Commonwealth Office (FCO), now headed by Raab, is a regular financier  of DFRlab (referred to as ‘Atlantic Council  Digital Forensic Research Lab’). For example it granted the lab £450,000 and £39,968.41 for the month of October 2018 alone. The Atlantic Council is separately funded by the FCO and NATO, as well as scores of other organisations and companies. These include security/arms companies Raytheon, Palantir, Thales and BAE, as well as the National Endowment for Democracy (which, according to Powerbase, is a CIA front). Arguably, all politically conservative.

Ben Nimmo, a senior fellow for information defense at DFRlab, was one of the authors of Operation Secondary Infektion, a report compiled for the Atlantic Council. He went on to pen an updated report for Graphika, which referenced that operation. However, it is not until page 34 of the report that Nimmo refers to the leaked US-UK trade talks documents. He claims they were promoted via at least one media platform in more than one language:

In other words, Nimmo is merely listing where and how the documents were disseminated, nothing more.

Meanwhile, on the same day that Raab issued his statement about Russian interference, an ITV reporter, who turned out to be Fred Dimbleby (son of David), doorstepped the former Labour leader. Dimbleby asked Corbyn if he regretted being complicit in the interference by Russians in UK elections:

Anyone know this guy’s name? https://t.co/tLlRzEOBkt

Of course, merely publicising documents of public interest is not the same as being ‘complicit’ in an alleged election interference campaign by Russians. Though no doubt Raab and the Tory establishment would have been pleased with this open display of ignorance by Dimbleby.

This whole episode of recycling the UK-US trade talks documents could be seen as a distraction. Indeed, subsequent to Raab’s ambiguous statement, Corbyn commented:

Today’s government claim is an attempt to divert attention from the threat to the NHS and the Tory party links to Russian oligarchs expected to be revealed in the long-buried parliamentary Russia report.

The ISC report on Russian interference in British elections and funding of Tories was provided to UK prime minister Boris Johnson on 17 October 2019, but he refused to publish it. That report is now expected to be published any day, although it’s unclear if it will be redacted and, if so, to what extent.