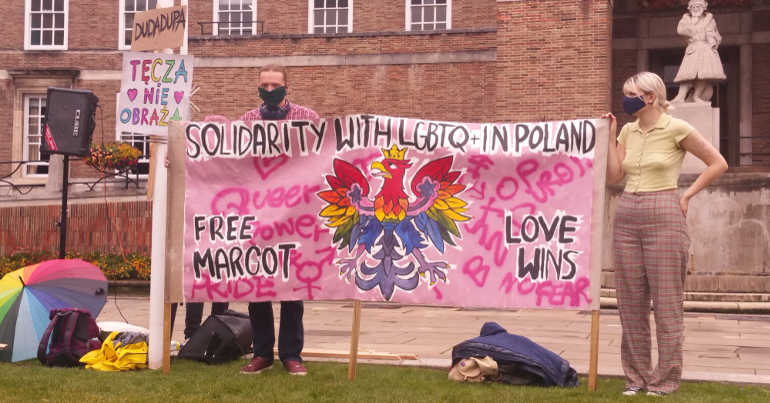 Poland’s LGBTQI+ community is finding itself increasingly unsafe as homophobic sentiment spreads around the country at an unprecedented rate.

Under right-wing President Andrzej Duda, the queer community has become a new scapegoat. Duda won his presidential campaign in July by arousing anti-LGBTQI+ and anti-abortion sentiment in the country. He argued that LGBTQI+ ideology was a greater threat to the country than communism and vowed to “ban the propagation of LGBT ideology” in schools.

And on 20 August, Duda appointed a new foreign minister, Zbigniew Rau. According to Gay Times:

It’s possible that Rau might be even more homophobic than Duda, having previously grossly linked “LGBT ideology” to a “civilisation of death” that included things like zoophilia, paedophilia and cannibalism. Yes, this really is as insane as it sounds.

One third of Polish municipalities are ‘anti-LGBT zones’

A third of Poland’s local municipalities – an area greater than the size of Hungary – have now declared themselves as LGBT-free zones. This is absolutely terrifying and puts LGBTQI+ communities at high risk of intimidation and hate crime. While many activists have organised protest marches, others have fled the country, scared for their safety.

Poland’s homophobic towns are now losing their EU funding, and are instead being bailed out by the state.

"The town of Tuchow in Poland will receive $67,800 in gvt funding after losing access to EU financial assistance for declaring itself "free of LGBTQ ideology." LGBTQ rights have become a flashpoint of Polish culture wars."
La #GuerraCultural en la práctica. https://t.co/Afj3Es19um

On Friday, 7 August 2020, 48 persons were arrested in Warsaw – in some cases quite brutally – and detained on the grounds that they had participated in a violent illegal gathering. In fact, they were engaged in a peaceful protest in solidarity with an LGBT+ activist named Margot, who had been arrested for damaging a homophobic campaigner’s van. Her group had also placed rainbow flags over statues, including a statue of Christ. These actions were neither “hooliganism” nor “provocations,” as Poland’s government-run media insist, but rather desperate acts of resistance against degrading homophobic hate speech. The van is one of many similar vehicles parading outrageous claims around the cities of Poland: equating homosexuality with pedophilia, and asserting that gays are the source of diseases and a threat to children.

Demonstrators have accused the Warsaw police of acting brutally. According to activists in Bristol, UK, the unrest in Warsaw has seen “shocking levels of police violence”. They say that:

Witnesses reported that the police threw people around “like a bag of potatoes”, detained random individuals, apparently including non-involved passers-by, injured many others, kneeled on peoples’ necks, kettled the demo, and snatched people from the crowd.

Stand in solidarity with our Polish friends

There have been a number of protests around the world against the repression of Poland’s LGBTQI+ community. We must join the demonstrations and make ourselves heard. The situation in Poland is at a critical level. Be an ally and take action to help stop this vile hatred.