Moria refugee camp has burned to the ground. Never forget the UK's role in creating this tragedy. - Canary Workers’ Co-op 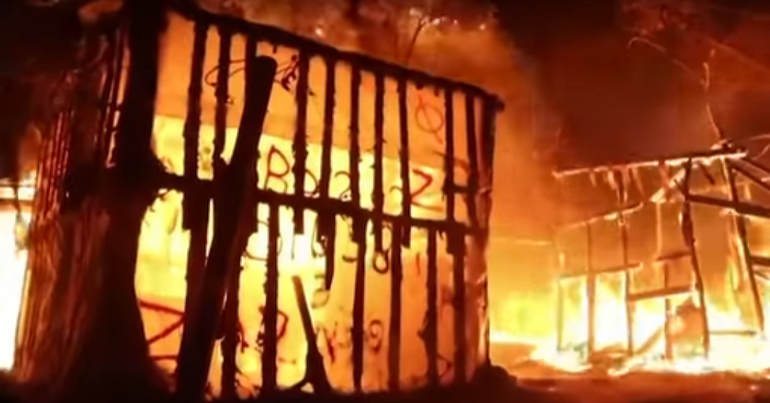 On 9 September, Europe’s largest refugee camp burned to the ground after a second fire engulfed the area. Moria, which has been described as the ‘worst refugee camp on Earth’, housed around 13,000 people on the Greek island of Lesbos. It had a capacity of less than 3,000. People were forced to flee the flames, but instead of offering aid, the government sent in police reinforcements. The police tear gassed people and prevented those made homeless from reaching the main town of Mytilini:

The videos show how police tear gassed the fleeing #Refugeesgr on the road to #Mytilini. Among the devastated crowd were children and elderly. They all got tear gassed for fleeing a burning hell. #Moria #LeaveNoOneBehind #evacuatemorianow pic.twitter.com/BHYYcfIHhz

And by 10 September, people were still trapped between police lines.

Residents of the squalid camp, surrounded by barbed wire, had been put under quarantine last week – effectively imprisoning them – after 35 people inside the camp tested positive for coronavirus (Covid-19):

This unbearable situation was magnified by the fact that for the past six months, residents have been under strict movement restrictions, and were placed under a complete lockdown a few days ago due to cases of the Coronavirus in the camp.

The UK is responsible for this mess

It is easy for us in the UK to turn a blind eye to the ongoing refugee crisis. Moria is thousands of kilometres away. It is a place that we hear about on the news, but which is not close enough to have a real effect on many of us. We can even conveniently erase the people stuck in Calais from our minds – at least until some successfully arrive on Kent’s shores to remind us of their existence.

But let’s remind ourselves why Moria exists, and why people are so desperate that they would risk their lives and cross a rough Channel in a rubber dinghy. Let’s think about why people have been forced to uproot their children’s lives in search of safety.

According to the UN, at the end of 2019 there were 79.5 million forcibly displaced people worldwide. 68% of these people come from just five countries, including 6.6 million people from Syria, and 2.7 million people from Afghanistan. The majority of people who have fled to Lesbos are from Afghanistan, Syria and Iraq. They are the ongoing reminder of the heinous crimes that the British government has committed in these countries.

Next year will see the twentieth anniversary of the US-UK invasion of Afghanistan. For many in the global north, that war – along with George W Bush and Tony Blair – is now a distant memory. But for those people from Afghanistan, struggling for survival on Lesbos, the invasion is still very, very real. It is the same for the people of Iraq, who saw their country decimated by our weapons. One estimate puts the Iraqi death toll at 2.4 million. The bombings have also left a legacy of birth defects and cancer.

“What will it take?”

Activists are not surprised by the scenes on Lesbos, and have described the situation as ‘inevitable’:

The fire in #Moria is a visceral manifestation of European policies, which have long tolerated the containment of migrants in dangerous, overcrowded & insecure conditions. It was not an accident; it was an inevitability.
https://t.co/LOdMIW1poN

Others are asking what it will take for collective action:

Yes, this should have been the priority for more than five years now. Evacuate Aegean Islands. Resettle refugees and asylum seekers. Provide adequate shelter to all #refugeesGR.

What will it take? Entire #Moria camp is in ashes, and sorrow is not a roof.
Act now.

One state in Germany has vowed to take in 1,000 people from Moria camp. But there’s a stunning silence from the rest of the international community. Of course, it’s unlikely that we’ll see the racist British government volunteering to house the very people who were forced to leave their lands because of the UK’s neocolonial policies.