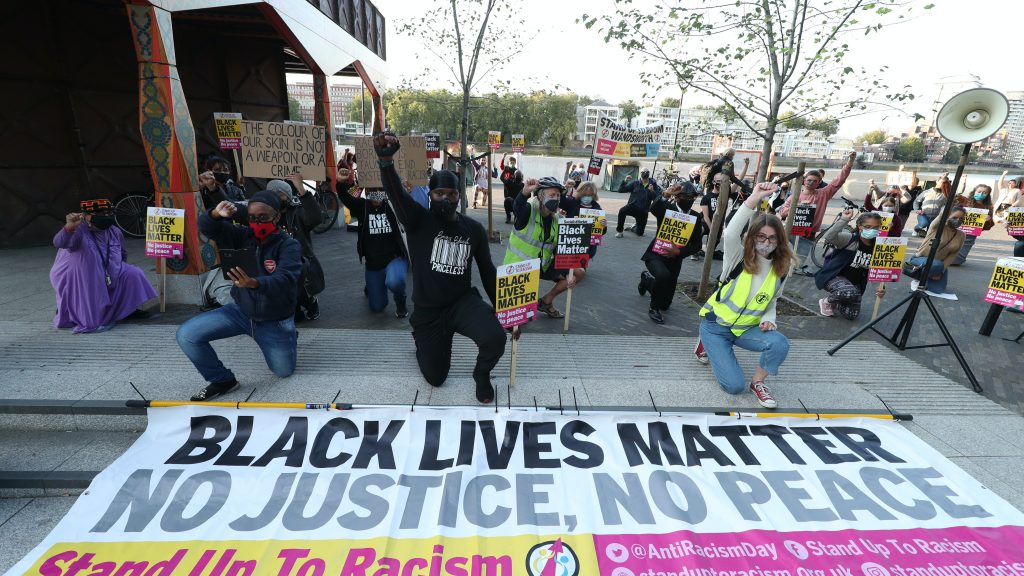 Anti-racism demonstrations took place across the UK on 11 September as the four officers charged over the killing of George Floyd in the US went on trial.

Protesters said they are determined to show that previous Black Lives Matter demonstrations were not “just a moment”.

Mass protests were staged across the world after footage emerged of officers kneeling on the neck of Floyd, a Black man, killing him.

The four men are charged over the death, but it’s understood they will push for separate trials in order to diminish their roles in the incident.

Socially distanced events took place outside the US embassy in London as well as in Manchester and Leeds. Protesters gathered in an act of solidarity against institutionalised racism.

Those involved were encouraged to “take the knee”. The act has become a symbol of solidarity with the Black Lives Matter movement.

Around 40 people gathered outside the US embassy, where the flag was flown at half mast to mark the anniversary of 9/11.

Brian Richardson, a barrister and member of the Stand Up To Racism steering committee, said that racism in the UK also needed to be “called out”. He told the PA news agency:

We wanted to come here and show our solidarity and continuing support for the family of George Floyd and the fight for justice.

The atmosphere is one of determination because I think a lot of people wondered whether the extraordinary outburst we saw in the first week (of the protests) was just a moment.

We’re determined to show it’s not a moment and we’re going to continue to stand shoulder to shoulder with George Floyd, Breonna Taylor and all the victims of injustice in America, but also to call out racism in this country.

Black Lives Matter is a global movement and we’re going to stand with our sisters and brothers in America, which is fantastically important.

Stand Up To Racism co-convener Weyman Bennett added that the UK was “facing a crossroads”. She said:

In Britain, the massively disproportionate use of stop and search under section 60 against black people must end.

This is not a moment, this is a movement.

No more black people killed by the police, no more inequality justified by racist lies.

No more divide and rule by the rich and powerful who use racism as a tool to defend inequality in society.

We need change and we need it now, in fact we demand it.