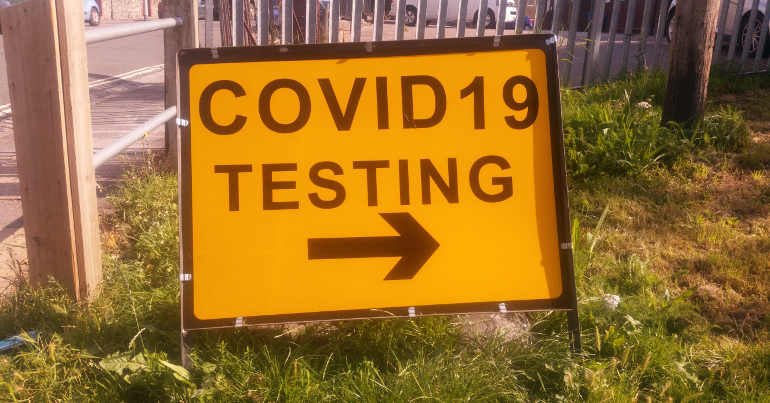 The public is rightfully outraged by the government’s coronavirus (Covid-19) testing nightmare. Those with symptoms can’t even get tested, despite testing centres looking empty. And even if you are lucky enough to get a test, you’ll probably have to wait longer than you thought for the results.

In my house, people with possible symptoms have tried to book a test online, but failed. The government website states that there are no testing facilities in our area, despite there being one just a few minutes’ walk from the house.

I walked to the testing centre to talk to the staff. “We’re fully booked,” I was told, despite the facility looking completely empty. “You need to try booking on the website every hour. But if any of you have symptoms, you can come here without an appointment. But only if you have symptoms.”

This information, however, isn’t widely available. Bristol Live reported that people have been turning up to test centres without appointments. But only out of desperation because they haven’t been able to book a test online.

The government has failed us

But the current scandal over testing is just the latest in a long line of government failures that have caused suffering and cost lives. And a damning new report from Save Our Hospital Services (SOHS), a campaign group based in Devon, documents these failures and gives us a needed reminder of past government actions:

by mid-March the Government had called off all contact tracing efforts, deciding instead to let the virus ‘move through the community’ at a rate that – it hoped – would not overwhelm healthcare services. Rather than committing the resources that would be needed for local public health officers to trace the growing number of cases, on 19 March the Government removed COVID-19’s classification as a high consequence infectious disease.

NHS labs could have used these weeks to build testing capacity, but they were waiting for PHE [Public Health England] to evaluate the available testing kits and reagents. These evaluations were not completed until late March. A microbiologist at NDDH went on the record to say that he and his lab team had offered to test nursing home residents in early April, as they had the capacity and “nobody else was doing anything”. But NHS executives ordered his team “to back off. They said, this is not your job. This is a PHE job.” And it was clear by this time that PHE was completely over-stretched.

Serco’s services are ‘unfit for purpose’

Meanwhile, #SercoTestAndTrace is trending on Twitter, and outrage is growing at the company which has been paid almost £46 million to run the UK’s testing service.

The Canary has reported on a number of Serco’s dodgy practices, including the fact that it shared hundreds of contact tracers’ email addresses. In 2019, the company was fined nearly £23 million by the Serious Fraud Office over an electronic tagging scandal, while earlier this year it was fined more than £1 million for other government contract failures.

SOHS has pointed out the failings of outsourcing to private companies. It said in its press release:

The national Track and Trace system, outsourced to Serco, has proved unfit for purpose. Local public health officers are now filling the gaps, but they should have been at the heart of track and trace from the start.

By June, it was clear that public health teams – despite their lack of funding, and being ‘out of the loop’ of the national testing regime – were doing a far better job of tracing contacts than the call centres set up by Serco. A quarter of the 31,000 people referred to national Test and Trace in June were not reached, and almost a third of those who were reached did not provide any contacts. Pillar 1 NHS hospital testing with local authority follow-up traced almost 100% of contacts.

SOHS gives a long list of recommendations, which the government would do well to listen to. These include:

An end to profiteering in our health and social care system; all private contracts to be subject to public scrutiny and transparency rules, and privatised services to be brought back into public provision

And it argues that:

Instead of setting up a new, inefficient, potentially unsafe scheme in the private sector, existing public health systems should have been given the resources to expand. GP surgeries are ideally placed to manage testing for their local area. Most patients could self-test, and skilled support would be on hand for anyone who found this difficult.

Over the years we have seen our government outsourcing anything it possibly can – from the railways to prison services – to private companies. So it’s no surprise that key services for fighting coronavirus are also privatised. But maybe this latest disaster is the final straw. How many lives do we need to lose unnecessarily before we realise that the government and its handpicked favourite companies are to blame, and hold them to account?