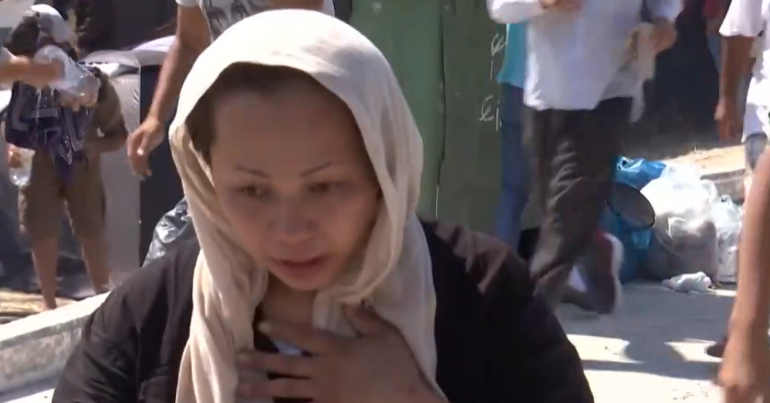 As the dire situation for refugees on the Greek island of Lesbos continues, campaigners are urging the UK government to urgently halt all sales of tear gas to the country. Moria refugee camp, housing around 13,000 people, burned to the ground on 9 September. In the days following, the Greek police has used brute force and tear-gassed refugees and protesters.

In July, a photographer tweeted photos of UK-made tear gas canisters and stun grenades used on protesters on the streets of Athens. The photos revealed that two UK companies, PW Defence and Centanex, are supplying the Greek forces. While it isn’t clear whether this is the same equipment used on Lesbos, Campaign Against The Arms Trade (CAAT) wants the government to stop sales and “review whether UK-made tear gas has been used against pro-democracy campaigners or refugees”.

The use of tear gas against refugees was appalling, and must be condemned in the strongest terms. Tear gas has an indiscriminate impact, and can lead to serious injury and sometimes even death. It has no legitimate role in policing or otherwise.

The Greek authorities have a long and shameful history of using tear gas against protesters. There must be a full investigation into if UK-made tear gas has been used, and an immediate halt to all sales.

This issue goes beyond Greece, with the UK selling tear gas to authoritarian regimes and repressive police forces all over the world. We have no idea when this will be used or what atrocities it will enable. The tear gas sales taking place today could be used in crackdowns and abuses for years to come.

Who are the companies?

Derbyshire-based PW Defence produces a range of CS gases, stun grenades, and rubber-coated steel bullets. It has been extensively documented that supposedly ‘non-lethal’ weapons such as these kill and maim people. CAAT has stated that PW Defence is also likely to hold an export license to sell these weapons to the US, where Black Lives Matter protests are being crushed with tear gas.

Centanex is based in Lincolnshire. According to the company, Centanex and its sister company GMK counts the UK Ministry of Defence and police as major customers of its “Flash Bangs, Smoke Grenades & other pyrotechnic training devices”.

The Canary contacted both companies for a comment, but had not received a response at the time of publication.

Shifting people into a new camp isn’t the answer

A new camp has been built on Lesbos. Police are moving people onto the site, but many refugees fear going there:

So far only around a tenth of the c. 12.000 asylum seekers rendered homeless by the fire had decided to move to the new site fearing they would be deported or remain locked in a closed facility. Thousands have been living in the open since last week‘s fire, under dire conditions

Democracy Now! interviewed journalist Frankziska Grillmeier, who lives on Lesbos. She described the desperation people are feeling on the island, and the tactics the Greek authorities are using to ensure that people move into the new camp:

The fire happened one week ago, and people were fleeing, really, with all they had on their body into the streets and were blocked in one street part, in between the camp and the main city of Mytilini, and they have stayed there now for eight days, mostly… without any running and clean water, without any sufficient food supplies, without electricity… Most of them are families, and they have elderly, they have people in wheelchairs. … any medical and legal assistance wasn’t allowed through.

it’s a real desperation, and the calculation of the Greek government was, in my opinion, to really break the people’s spirit at this moment in order to go into the new camp facility. Many fear because it’s a symbol of retraumatisation and… no safety for them.

The majority of people who have fled to Lesbos are from Afghanistan, Syria, and Iraq. They are victims of our bombs. It’s time to end this disgusting arms trade, which literally profits from murder.

It’s also vital that the thousands of refugees on Lesbos are resettled immediately: not into camps, but into homes and communities. Freedom of movement is a right for every human, not just for those who are privileged to be born in the affluent countries of the Global North.