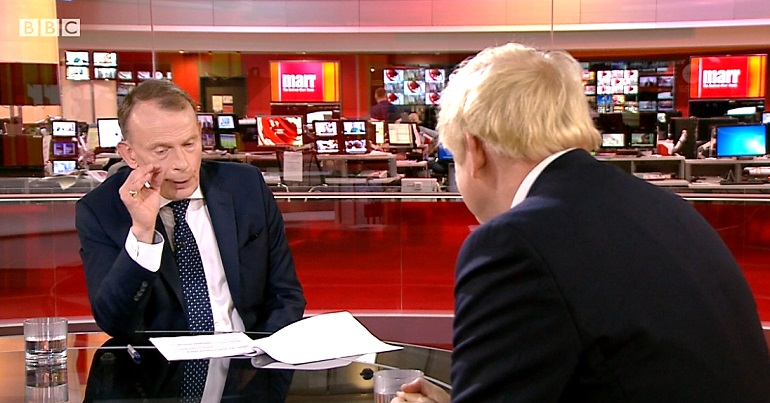 Another Sunday morning, another episode of the Andrew Marr Show dividing the viewing public. And one person’s tweet pointed to a deeper problem. It’s one that, on the face of it, seems complex – but in reality it’s pretty simple.

Marr’s at it again

People were not happy with the show on Sunday 4 October. Boris Johnson was on. So, surprise, surprise:

Incredibly crass !
Andrew Marr opens #Marr stating
" A TOUGH year ahead, but it's NOT going to be a BORING one "
That is how the MSM, the commentariat & the punditocracy view the deep anguish, social & economic fallout from Covid/Brexit facing us in the times ahead.#Insensitive

I thought journalist should challenge propaganda and disinformation. Can we actually call this an interview, or simply a political platform? #Marr

All those people – and there were many – telling me over the last couple of weeks that we need to support and save the BBC, did you watch #Marr? And if you did, can you still say the BBC needs saving?

Cue mentions of 6 music, all those lovely docs etc.

His comment perfectly sums up the problem with the BBC. Because it’s stuck between a rock and a hard place. And the same applies to us, the viewers, too.

There’s no doubt that a lot of BBC output is excellent. Holby and Casualty are the only TV shows I watch regularly. I’m totally caught up in them. The script writers construct brilliant storylines. Both programmes make political and social points within the scripts. The acting from all the cast is first-rate. Both shows’ camera work, direction and production is stellar. And you could say the same for other fictional output. Moreover, many people would say BBC documentaries are world-class.

But then you have BBC news, politics and current affairs. What a shit-show that is. You can read why BBC News is such a state across a load of Canary articles here. One example is its biased coverage of the 2019 general election. Loughborough University found that broadcasters, including the BBC, framed the election as a ‘Brexit’ one. This played into the Tory’s narrative. People often called the main BBC News coverage biased in favour of the Tories. And the London School of Economics (LSE) found that this bias even extended to results night.

Let’s say all this is true. But it still begs the question: why is it such?

First up, many of the BBC‘s main journalists are right-wing, from the now-departed Andrew Neil to Nick Robinson. But this problem also comes from the top. The BBC‘s new director general Tim Davie is a Tory. Its director of news and current affairs Fran Unsworth was privately educated. So the BBC presenting an unbalanced worldview is a problem with a systemic cause.

But that still doesn’t fully explain the BBC‘s general bias towards to the government of the day. As I wrote for CommonSpace in 2016:

The BBC has one bias and that is in protecting its public funding, regardless of what government is in charge at the time of its Royal Charter renewal – you only have to juxtapose its coverage of the second Iraq and Afghan wars under a Labour Government with the Syria campaign under the present incumbents to realise this

Moreover, BBC journalists are almost trained in this skewed notion of impartiality. Media Lens showed this in the ‘five stages of mainstream journalism’:

Holby should not rescue the BBC

In layman’s terms? Media organisations mould corporate journalists into unquestioning robots. This is because everyone has careers to protect and money to make. So you can’t rock the boat too much. But where does this leave the BBC?

The truth is that its, often excellent, non-news output simply does not outweigh its other problems. Me enjoying Holby doesn’t balance the scales. It doesn’t dampen the fact that the BBC actively works against the public interest that it’s meant to serve. The world is in chaos. The BBC has played a role in this. So all the glossy, escapist drama you can watch doesn’t make a blind bit of difference.

Bernal is right to point this out. When the BBC is central to the state of society and the world, Holby is not going to redeem it. And nor should it be allowed to.