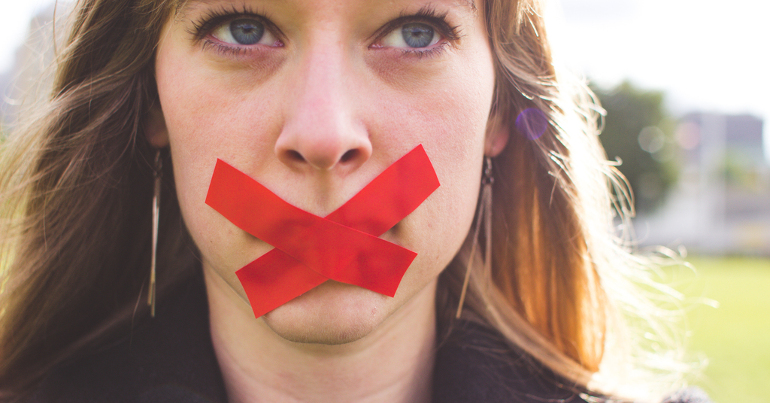 Content warning: this piece includes discussion of domestic violence and sexual violence that might be triggering for some readers

The ‘rough sex defence clause’ – legally known as NC20 – is due for its second reading in the House of Lords. But some legal experts claim that it may not change trial verdicts.

But there are concerns that the “rough sex defence clause”, backed by MPs in parliament on 6 July, may not be effective in changing trial verdicts. Parliament can’t legislate a defendant’s reasoning in court. In other words, it cannot prevent a defendant from telling a jury that the act was consensual.

The ‘rough sex defence’ is usually a description for a defendant who claims the deceased died as a result of consensual, violent sex which ‘went wrong’ but that he had no intention to kill or cause really serious harm.

It is often said by defendants in these cases that any injuries were caused accidentally. It has been used as an explanation with increasing regularity and, exclusively, by male defendants.

The amendment was supported by MPs following the groundwork of activist group We Can’t Consent To This, who campaign for justice for rough sex defence victims.

3.6 million UK women have experienced non-consensual violence during consensual sex, including strangulation, gagging, slapping, and spitting, according to research released in 2019.

But that’s just the start.

The activist group We Can’t Consent To This has proven that, in almost 50 years, there have been at least 60 cases where UK women were killed by a man who claimed it was a sexual act gone wrong.

We Can’t Consent To This research reveals that:

32 women were killed by current or ex-partners.

The activist group’s concern over the normalisation of choking is reflected in the statistics that show that two-thirds of the women killed were strangled.

This is also growing concern, as:

The rough sex defence is not a legal defence

Over the last 50 years, 45% of UK killings in which the defendant claimed that the woman’s injuries were sustained in sex ‘gone wrong’ resulted “in a lesser charge of manslaughter, a lighter sentence, or the death not being investigated as a crime at all”.

This is despite the fact that since 1993, consent has not been a legal defence under UK law.

The 1993 R V Brown case ruled that even with consent, grievous bodily harm and unlawful wounding is a criminal offence under the Offences Against the Person Act 1861. The case law means that when an act of violence is carried out consent cannot be used as a defence.

While the passing of the rough sex defence clause would re-affirm this ruling, it may not change trial verdicts as it does not prevent defendants from advancing their explanation at trial.

This is because, Reed explained, intent is a necessary factor in proving the offence:

The proposed legislation does not alter the fact that the key issue for the jury to determine will usually be: what was the defendant’s intention? Did the defendant intend to kill or cause really serious harm to the victim? The jury do not necessarily have to resolve the issue of consent to reach a verdict.

In other words, while consent is not a defence in itself, the issue of consent is still relevant to proving intent for charges such as murder.

In addition to the rough sex defence clause, We Can’t Consent To This has proposed new clauses to protect survivors of sexual violence in the future.

The new clauses include:

NC9 has made headlines in recent months after research found that non-fatal strangulation can have severe effects, including “loss of consciousness… stroke, seizures, motor and speech disorders, and paralysis”.

Together, these proposed clauses may provide a more effective step in protecting survivors than the rough sex defence as they set out fully enforcable safeguarding measures.

there are more meaningful steps which could be taken to address the issues rather than simply restating the law. Legislation can help by closing the gap between the protection afforded to victims of sexual violence who survive, and those who do not.

Some of the protections afforded to complainants in sexual offence cases could be extended to murder cases where a defendant maintains a ‘consensual violence’ defence: trial judges could provide further, detailed directions to juries about myths surrounding sexual violence and rape; the deceased could be granted anonymity; the long-standing, stringent protections available in other cases regarding the use of evidence of the previous sexual history of the complainant could be adapted to apply in these cases as well.

With the continuing input of legal experts, the proposed new clauses like the offence of non-fatal strangulation in domestic abuse contexts will provide better safeguards for survivors of domestic and sexual violence.

Following MPs backing the amedment, We Can’t Consent To This issued the following statement: 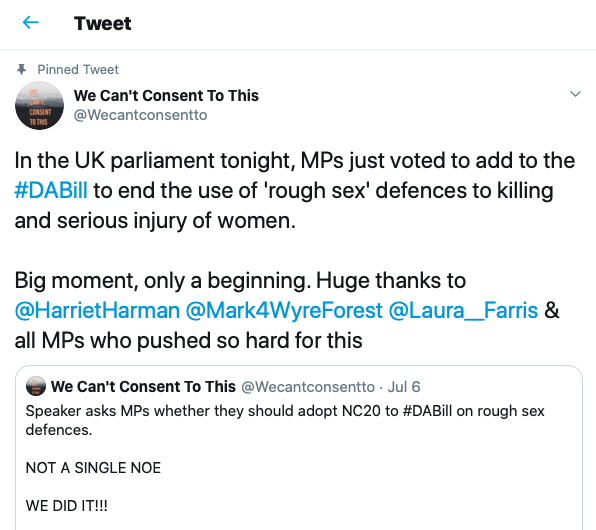 A vital conversation is needed

You can read the stories of UK women whose murders fuelled the We Cant Consent To This campaign. However before you do, we’d like to pre-warn you that they contain graphic information and descriptions of how they were killed. You can also join a wider conversation about sexual violence during consensual sex here. All of these posts are anonymous, and provide a safe space where women can share their experiences.

While the majority of posts are from women about men, these cases aren’t universal. It is vital that we open a platform for conversation about sexual violence as it continues to be normalised in our society. There is hope that with avid campaigning, survivors testimonies, and expert input that legislation can be passed to effectively safeguard not just women but any sexual violence survivor.

Only through talking and educating each other about sexual violence can we hope to combat it. One click at a time.