At the start of #BlackHistoryMonth, deportations and raids show racist state violence is alive and well in the UK - Canary 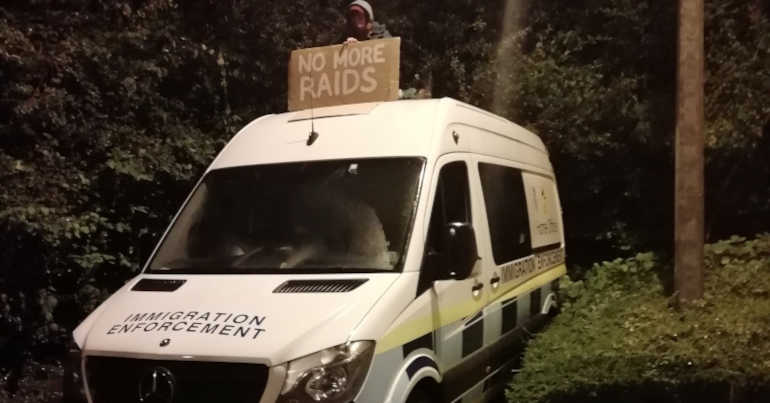 We’re almost a week into this year’s Black History Month, in a year where violence against Black people has already sparked an uprising in the US and the global growth of the #BlackLivesMatter movement.

Already, establishment figures are using the occasion to tell a nationalistic bedtime story where, in the words of Boris Johnson, “Britain is one of the most diverse and inclusive societies in the world”, and stories of Black NHS workers and war heroes replace the rich history of Black struggles against white supremacy.

There is a degree of deafness when it comes to African Caribbean people. Some might call it a callous disregard. I would not be surprised to learn that not a single member of my family was spoken to before this was produced: https://t.co/6t8wyrFpHA Bizarre.

— The Life and Legacy of George Arthur Roberts (@TheLifeandLega1) October 6, 2020

I think [Black Lives Matter is] a sort of neo-Marxist organisation that wants to overthrow capitalism and get rid of the police.

I think the organisation itself is not a force for good.

Beyond the empty words from number ten about the UK being an “inclusive society”, the daily acts of state violence against people of colour continue. Violence by the police, the prison system, and the Border Agency continues as agencies enforce increasingly racist laws enacted by both Tory and Labour governments.

As well as being autistic, Brown is suffering from PTSD and a heart problem. His body is covered in scars from injuries he inflicted on himself while he was in prison.

The Home Office applied to deport Brown to Jamaica on the completion of his sentence, a country he hasn’t been to since he was four years old. His family says that he will not be able to cope with deportation. His mother told the Independent earlier this year:

If he is deported he will die… He wouldn’t cope. If he can’t even cope here, how is he going to cope in a environment and a culture he doesn’t know? He would be exploited because of his vulnerability.

This week Brown’s family claimed a victory when they received news that he would be freed from prison rather than sent to an immigration deportation centre:

As announced this morning, #OsimeBrown will return to his family home on release from prison this week on Wednesday, rather than being taken to an immigration centre. This follows huge pressure which has seen MPs and over 1000,000 people in the UK demand his freedom.

But the Home Office has refused to go back on its deportation order against Brown, and is planning a removal hearing within the coming weeks. The family is calling for support:

'We still have to fight' – Mother of Osime Brown says he will be released home from prison but the deportation notice from @ukhomeoffice still stands – live on @BBCNews this morning. Follow @FreeOsimeBrown for updates. pic.twitter.com/8p8vJp1CRJ

A ‘Twitter Storm‘ is planned on the evening of Tuesday 6 October, calling for the Home Office to end deportation proceedings:

The Canary contacted the Home Office to ask whether it still intends to deport Brown, despite the concerns raised about his welfare. It refused to give any comment.

And Brown’s case is just one example of the way the prison system and the border regime intersect to destroy the lives of people of colour.

People are fighting back every day against the injustice of the border regime.

In the early hours of 6 October, a group of people from the south west came together to stop an immigration raid. Activists entered the Home Office compound in Portishead, where the Immigration Enforcement vans that carry out immigration raids are kept, and occupied the roof of the vehicles.

One person, who joined the anti-raid action, told The Canary that “several cars full of border force workers arrived, but turned around when they saw us”.

A tweet from Bristol Anti Raids explained the importance of the action:

Immigration Enforcement vans blocked in Portishead this morning. Immigration raids tear people from their homes and communities brutally and barely legally. Together we can resist the #HostileEnvironment pic.twitter.com/flsx1gaUEw

The UK’s racist border regime brutally rips people from their homes, families and communities. Nobody deserves to be treated like this. We can all do things to resist this hostile environment.

No arrests were made, and the group claimed that it probably prevented an immigration raid:

Portishead update – everyone down, no arrests and almost certainly prevented a raid.

Want to also take action against the #HostileEnvironment? – join the nationwide Solidarity Knows No Borders: Weekend of Action Against the Hostile Environment#SKNB https://t.co/pttpULbRg1 pic.twitter.com/QWMPQAgv7A

D – Darcus Howe was a leading activist in the Black Panther Movement, the Mangrove 9 and editor of Race Today. Check out the forthcoming Small Axe series on BBC https://t.co/zVCdSggu9t#BlackHistoryMatters#BlackFuturesMatter#BlackRevolutionariesMatter pic.twitter.com/ogQ3m5nexj

A history of struggle

When Johnson claimed Black history as part of “our history”, he was trying to co-opt Black people’s narratives into the story of a state that’s spent hundreds of years profiting from the oppression and enslavement of Black people. His words are an empty and cynical attempt to gloss over the ongoing violence of white supremacy, which is alive and well in the UK today.

As I write this piece, I am aware of my position as a white radical, and the limitations of me as a white person writing about racism. I hope to be a consistent ally to my comrades of colour, but at the same time, my white skin affords me countless privileges. I’ve faced police violence, but I know that as a white person I will never face the same racist and institutional violence that people of colour face in the UK today.

While Johnson spouts his jingoistic rhetoric, those of us who want to be allies must look to the rich and ongoing history of struggle by Black people in the UK against racism and state control and learn from it.