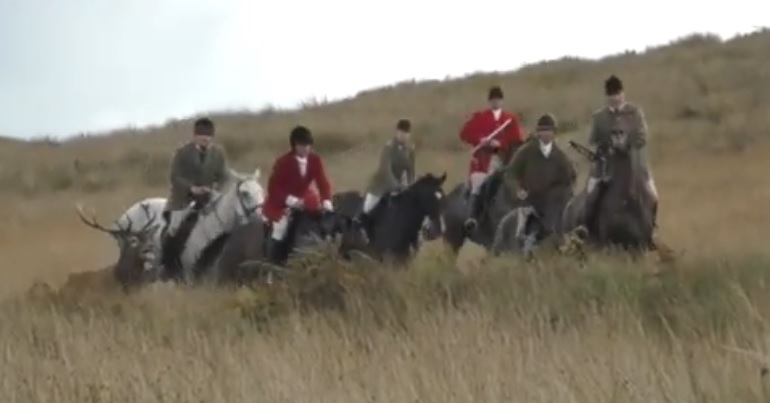 The UK’s pro-hunting group rushed to defend its members after a ‘savage’ video of a deer hunt emerged. Unfortunately for hunters, the Countryside Alliance’s defence of the horrifying scene that unfolded in the video has only dropped its members further in the shit.

As the Times reported, the League Against Cruel Sports (LACS) captured the incident on 1 October. The video shows hunters from the Devon and Somerset Staghounds (DSSH) pursuing a red deer across Exmoor. Describing the scene, LACS chief executive Andy Knott asserted:

This is animal cruelty at its most shocking. The stag is clearly exhausted and suffering. It would have been running for miles. The film shows the hunt cracking a whip over its head, urging it on while baying supporters stand in the road to harass and confuse the stag some more to prevent it from escaping. All of this just so they can drag out the chase and the stag’s suffering for longer.

The Times confronted the Countryside Alliance, the industry’s campaigning organisation, with the footage. It argued:

The Devon and Somerset Staghounds were conducting legal hunting activities on Thursday, October 1, in compliance with the Hunting Act, when a stag was located that displayed obvious signs of injury and required immediate euthanasia.

Members of the hunt attempted to facilitate this as soon as possible to minimise the suffering to the stag.

Asked by the Times why hunters had to chase the stag in order to euthanise him, the group claimed:

The stag was stopped from running into cover and was shot by a licensed marksman.

There are numerous issues with this defence. First, the video shows that the riders had the stag surrounded at points. Second, it also appears to show little cover to run to, with the situation happening on open land, bar the odd tree dotted here and there. So there’s giant holes in the argument that a chase and whipping had to occur in order to stop the stag “running into cover”.

The DSSH declined to comment on the video, the Times said.

The Countryside Alliance’s claim that the hunt was operating ‘legally’ is also problematic. As the Times explained, the 2004 Hunting Act “outlawed the hunting of mammals with dogs”. But it does allow hunters to use two dogs to find wounded deer, and flush them out from undergrowth if necessary, as long as they’re shot “as soon as possible” or for “research and observation”. As we’ve seen with previous “shocking footage” of stag hunts, these loopholes mean that hunts may well be operating within the law, even though their actions, as Knott says, involve blatant “animal cruelty”.

This begs the question as to whether the UK’s current laws are strong enough. Are they consistent with what the British public deems acceptable and right? The reaction to a tweet from conservationist Chris Packham highlighting DSSH’s “savagery” suggests the answer to that is a resounding no:

It’s so bloody disgusting! How anyone…anyone at all…from ANY walk of life can call chasing a wounded animal pleasurable/necessary/traditional! What does it say about us? It’s such a disgrace! End it…NOW

Appalling YES, Disgusting YES, Immoral YES, Cruel YES. Even more appalling when you realise that groups like this have been REWARDED with Government Grants from Taxpayer's money, designed to assist those businesses suffering due to Covid-19.

"Today I rode round on my filly screaming 'aaaahh-yaaaaahhh' at the top of my lungs while whipping a beautiful animal as he ran for his life. Such FUN! And tomorrow we're off to bludgeon a fox to death. Tally-ho!"

Makes the PM's speech today look silly. Speaking up for 'animal welfare' is pointless unless action is taken to stop it.https://t.co/SqYCBXqfaQ

So although the Countryside Alliance attempted to come to the hunters’ defence by brandishing the practice’s legal status, it only dropped its members further in the shit. Because it highlighted that there’s a vast distance between what the British public believes is acceptable and what the law says is acceptable. To deliver on the will of the British people, these loopholes need to be closed now.