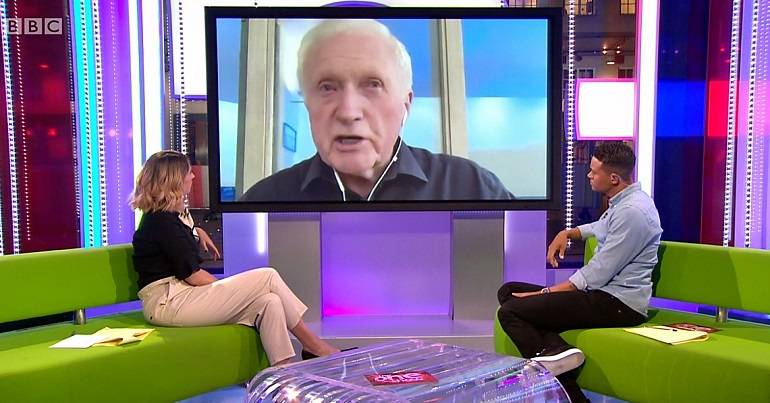 Former Question Time host David Dimbleby used to get flack over butting-in when his guests were speaking. Sadly for him, the shoe was on the other foot on Tuesday 6 September. As a host royally shut him down on The One Show.

You can’t say THAT, Dimbleby!

Kevin Pascoe tweeted a clip from the show. It shows Dimbleby going on one about the Tory government. He wasn’t happy with how its handling the coronavirus (Covid-19) pandemic. Dimbleby said:

There are places where it may be done better. Germany seems to be handling it much, much better in a more kind-of considered and disciplined way, and listening to what’s said. We seem to be just all over the place, here. And I think it’s the government’s fault, myself. Because I think they began badly, and they’ve gone on badly. And they’re floundering, and I feel sorry for them, actually

But someone was clearly screaming in guest host and ex-footballer Jermaine Jenas’ earpiece. Because he quickly shut Dimbleby down:

we don’t really want to get into that.

Who is the male One Show presenter going into melt down to shut David Dimbleby up for criticising Johnson’s useless government? pic.twitter.com/pmr2A8KlwI

What does ex-professional footballer and @BBCTheOneShow host Jermaine Jenas think he's playing at?? He actually shut down David Dimbleby for expressing an opinion on the government's handling of Covid-19. https://t.co/j6PqaMZOSp

Jermaine Jenas telling David Dimbleby “we don’t really want to get into that…” I’m not sure where to start with this but my initial thoughts are, i’d really have liked to get into that actually https://t.co/hBsPqYHLIA

So, Dimbleby being silenced when trying to make a political point is certainly ironic. But there’s a bigger problem with Jenas shutting him down.

The One Show is one of the most-viewed programmes on TV. Over 3.5 million people watched it on 22 September. But it’s also problematic. Jack Bernhardt wrote for the Guardian in 2017 that:

In some ways it’s the perfect flagship for BBC1 – in trying to be a show for everyone all the time, it ends up being a show for no one.

It tends to put a cuddly sheen on politics. Who can forget Theresa May’s husband admitting he takes the bins out?

And that’s the problem. The One Show was chatting about bins with the PM and her husband – in the middle of the 2017 general election campaign. By reducing politics to mindless chat about household chores, The One Show is doing a disservice to its viewers.

And by shutting down Dimbleby, it’s doing the same thing again. Its 3.5 million viewers deserve better. But it’s the BBC. So really – we shouldn’t expect anything less.