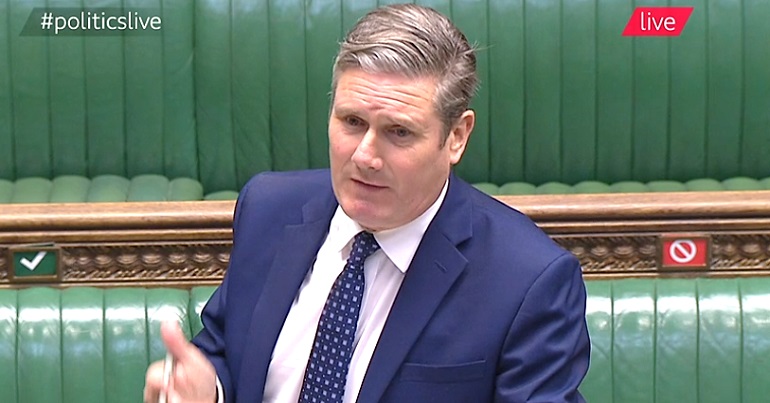 It’s fair enough if you’ve given up watching Prime Minister’s Questions (PMQs) recently. Because the previous few weeks have been dire to say the least. But a question from Keir Starmer to Boris Johnson over the 10pm curfew for pubs and restaurants cast a light on another big story. And it shows the Labour leader is devoid of principles.

As BBC political editor Laura Kuenssberg tweeted, Starmer might be about to ‘rebel’ against Johnson:

Getting tricky for govt – fair number of Tory MPs might vote against the 10pm curfew next week – Labour supported it initially but by asking for the evidence to back it, Starmer paving the way for party to change position next week – if they do so changes the numbers a lot https://t.co/5J1uKifhjX

She was not the only one who spotted it:

But vote 10pm curfew shaping up to be battle next wk. Starmer asking for scientific basis for the rule. If Lab withdraw support, govt could face defeat #PMQs

As we said last week, Boris Johnson may have negotiated a compromise over the renewal of coronavirus powers but the rebellion hasn’t gone away.

With Labour preparing the way to vote against the 10pm rule next week, the PM is heading for another showdown with his own side in days

So, it seems Starmer could tell his MPs to vote against the 10pm rule. But this is particularly damning given the bills he’s asked MPs to abstain on. What a shame he couldn’t do the same over, say – the potential torture and murder of people by UK government actors?

The covert human intelligence sources (CHIS) bill has hit the news this week. LabourList said it:

aims to give legal protection for a previously secret power – ‘the third direction’ – allowing MI5, police forces and other specified public bodies to authorise agents and informants to commit criminal offences.

Amnesty UK has warned that ‘this bill could end up providing informers and agents with a licence to kill’ and stressed that it ‘does not explicitly prohibit MI5 and other agencies from authorising crimes like torture and killing’.

Essentially, as the Guardian reported, the:

Or, as the Morning Star summed up:

Even the equivalent legislation in the United States rules out torture and murder, yet nothing is ruled out in this Bill. We are assured only that law-breaking will be limited to specific, internally approved cases.

On Monday 5 October, there was a vote on the bill in parliament. Starmer, though, had told his MP’s to abstain. But 20 MPs, including Jeremy Corbyn, voted against the bill. And Starmer’s decision caused outrage:

We are disgusted that Keir Starmer a human rights lawyer whipped Labour to abstain against the #CHISBill, abstaining is appeasing this regime.

If Labour had voted against the bill would not have passed.

Thank you to those who voted against this heinous bill.🍥

Hugely disappointed with how Keir Starmer is failing to shape up. Inexcusable to whip to abstain on morally abhorrent bills. We all know what happens when the good do nothing

But Labour abstaining on massive issues is nothing new. Starmer previously sacked Nadia Whittome from the front bench for not abstaining (and voting against) another bill. Centrist leaders have a track record of forcing MPs to abstain. Not least during repeated votes on welfare issues.

The CHIS bill has still got more stages to pass through. The Canary will be publishing more analysis on the implications of the bill. But Starmer’s whipping on it sums up his leadership entirely: devoid of principle and pandering to right-wing rhetoric.