Johnson is gaslighting us, his energy pledge is just the latest example - Canary 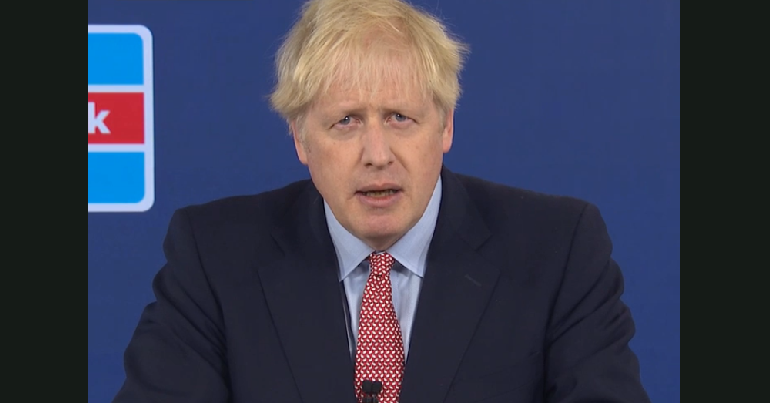 On 6 October, Boris Johnson announced big plans to make the UK ‘the Saudi Arabia of wind energy’. In what was touted as a huge announcement, he told the nation:

Offshore wind will be powering every home in the country… You heard me right! Your kettle. Your washing machine, your cooker, your heating, your plug-in electric vehicle – the whole lot of them – will get their juice cleanly and without guilt from the breezes that blow around these islands.

With much fanfare and the requisite amount of air-punching, Johnson went on to promise £160m in funding for offshore wind projects. His speech was further peppered with inane humour – “some people used to sneer at wind power… and say ‘It wouldn’t pull the skin off a rice pudding!'” – and patriotic references to coloniser Walter Raleigh and slave trader Francis Drake. In other words, it was typical of Johnson’s mode of operation. Use oration and patriotism to cover up the shocking lack of substance in his promises and distract from the failures of his government.

The Canary has already reported on the glaring shortcomings in Johnson’s plans.

the level of investment proposed by the prime minister is nowhere near matching his rhetoric. The £160m for wind power due to be announced today falls far short of the £48bn that analysts say is necessary.

This also has to be understood in the context of the UK still spending far greater amounts on fossil fuels. In the current climate emergency, the goal of reaching net zero emissions by 2050 just won’t cut it.

In July, Johnson attempted to imitate New Zealand prime minister Jacinda Ardern by putting out a two-minute video listing his achievements as PM over the past year. Here are just some claims he made which can be easily debunked:

Johnson’s two-minute summary gave just some examples of his claims being more style than substance. Other examples from 2020 have been:

The truth behind the figures

So, in reality, we can’t take any claims that Johnson makes at face value. Too often the words that come out of his mouth are either outright lies (“stockpiles of PPE”) or a misrepresentation of facts. The pledge to spend £160m on wind energy is just the latest example of him enthusiastically throwing figures out while knowing that the general public is unaware of the wider context for these figures.

The mainstream media has repeatedly failed to call Johnson out on his lies. And moreover, it has failed to critically analyse his claims or contextualise them for the understanding of the general public. This level of deception surely amounts to gaslighting. And the only way to counter it is to keep exposing his manipulation. Luckily, journalists at The Canary and other independent media outlets are here to do just that.