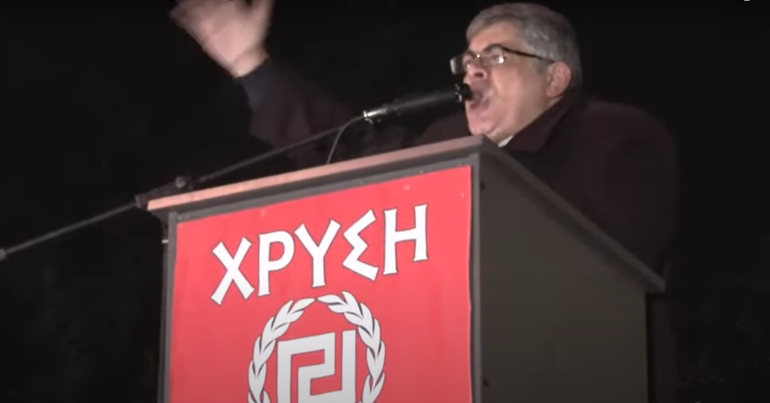 A Greek court has ruled that the neo-Nazi party Golden Dawn (GD) is a criminal organisation and that GD supporter Yiorgos Roupakias is guilty of the murder of rapper Pavlov Fyssas.

But there remain unanswered questions about the role of the police. And why earlier warnings that GD hoped to provoke a civil war in Greece as part of a “strategy of tension” went unheeded.

After the landmark ruling, thousands gathered to celebrate:

The Athens Criminal Court has found the Nazi party #GoldenDawn guilty of operating as a criminal organisation. Its leadership found guilty of running a criminal organization. A historic verdict, a historic day for #Democracy in #Greece with thousands on the streets cheering. pic.twitter.com/CFRHB4OeLk

It’s official. Golden Dawn is over.

The mood here today is resonant of the celebrations we saw with the liberation of Athens from the Nazis.

But the criminal status of GD could have been dealt with years ago.

In November 2012, it was reported that GD led a “mob of 150 people” to attack migrants and their shops. In January 2013, GD supporters murdered Shahzad Luqman, a migrant worker from Pakistan. In September 2013, Giorgos Roupakias murdered anti-fascist rapper Fyssas. In the aftermath of Fyssas’ death, 69 GD members, including the senior leadership figures, were arrested. In November 2013, it was reported that two GD members were shot and killed.

In February 2013, an anarchist blog warned that Greece was experiencing a “strategy of tension” scenario after far-right activists and police were arrested for allegedly conspiring to plot a massacre. It was reported that “266,000 euros, 3,000 dollars, 19 guns, a grenade, detonators and police clothing were found amongst what the Police have confiscated from the group”. The money was believed to have been part of the proceeds from bank robberies.

In April 2013, Vice journalist Yiannis Baboulias conducted an interview with investigative journalist Dimitris Psarras, who wrote a book on GD. In the interview Psarras agreed that GD were hoping for a civil war, resulting from a Greek version of Italy’s “strategy of tension”:

Do you think Greece is starting to see a “strategy of tension” enacted? Golden Dawn trying to manipulate the public with fear?
I believe it’s already happening. Golden Dawn’s strategy today is exactly that. Ilias Panagiotaros, one of Golden Dawn’s MPs, actually said “There is already civil war” in an interview. They want to force the other side’s hand into committing similar violent acts, just like during the strategy of tension in Italy in the 70s.

So what you’re saying is not that it might happen, but that it’s definitely already happening?
Definitely. Maybe not with the same intensity as Italy’s blind bombings in the 70s, but let’s not forget that Golden Dawn and Michaloliakos’s heritages both involve the Italians. Even recently, actually, the Golden Dawn magazine _Meandric—_which they circulate internally inside the organization—ran a piece on Pino Rauti, one of the leaders of the neofascist Ordine Nuovo, the far-right group directly involved with the bombings in Italy in the 70s.

spent some time in jail in 1979 for illegally carrying guns and explosives. More recently, supporters of the party have been linked with murdering immigrants [link invalid] in the streets of Athens, casual violence against both immigrants and anarchists, and, in the tradition of their leader, arrested on more than one for carrying guns and explosives.

In another interview in September 2013 by Greek Left Review, Psarras describes how GD, also referred to below as Chrysi Avghi (CA) – the Greek name for Golden Dawn, operates:

A typical example of a pogrom was the two-week-long attack against immigrants in the centre of Athens in May 2011, using as a pretext the assassination of a Greek, Manolis Kandaris. Dozens of immigrants were wounded, some of them seriously, and one died. Similar pogroms initiated by Nazis against immigrants occurred throughout Greece in preceding years – in 2004 for example after a soccer competition between Albania and Greece. Dozens of Albanian immigrants living here paid for Greece’s defeat in that case. As for lynching, it generally happens in the evening, with groups made up of many CA members (the ‘Phalanges’ or ‘Storm Divisions’), by isolating one or two immigrants and beating them until they lose consciousness. A very characteristic example took place in June 1998. In broad daylight, a group of 10 CA members armed with clubs and headed by Antonios Androutsopoulos, the organization’s number two man at the time attacked three left-wing student-trade unionists who were sitting in a café. They did not stop until they left one of them for dead. In the end the student survived after fighting for his life for several days. Similar attacks have occurred almost every evening, targeting immigrant workers, but we only hear of them when the victims dare to go to hospital.

Psarras also argues that many GD members avoided arrest because they had support from the police:

the vice-head of CA was sentenced to a heavy prison term for the 1998 attack [on left-wing student trade unionists]. However, he had been able to hide out for 7 years before turning himself in to the authorities. The reason for all the impunity is that for years Chrysi Avghi had a special relationship with the police and in particular with MAT, the riot control police. The police used the organization to do its dirty work in repressing mass demonstrations. At the time of the last elections, it was demonstrated that a good part of the police voted for CA. This is also the reason for the authorities’ reticence in investigating Nazi aggression.

A forensic study of the murder of Fyssas was conducted and it’s suggested police were present during the killing:

In 2014, a leaked video indicated collusion between then New Democracy president Antonis Samaras and GD.

Nazis should not be tolerated, but promptly dealt with in the courts. And if need be, on the streets:

But that was certainly not the case with the Spectator, which appeared to support GD:

And while the court rulings in Greece are to be welcomed, it must not be forgotten that it took seven years since the murder of Fyssas for justice to be done. That, too, is intolerable.