Liz Truss can Fouc off 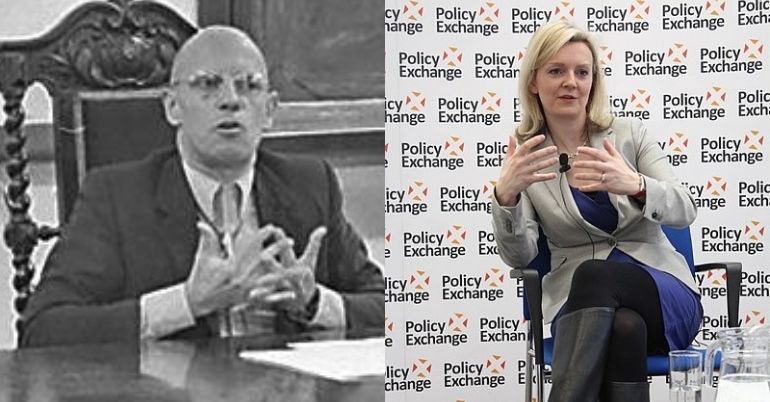 In her latest speech, minister for women and equalities Liz Truss took the opportunity to have a crack at the late French philosopher Michel Foucault.

While we were taught about racism and sexism, there was too little time spent making sure everyone could read and write.

She blamed this on the French postmodernist thinker:

These ideas have their roots in post-modernist philosophy – pioneered by Foucault – that put societal power structures and labels ahead of individuals and their endeavours.

In this school of thought, there is no space for evidence, as there is no objective view – truth and morality are all relative.

In a strange turn of events, the version of the speech on the government website had several ‘political’ parts of the speech redacted. Although, it has been widely reproduced elsewhere.

But apart from misinterpreting Foucault, what’s really happening here is a coded attack on socialist notions of equality and the left broadly. It’s part of an increasing trend by the right of using left-wing philosophers, ideas, and even a mainstream antisemitic conspiracy theory originating in the far-right to buttress a conservative regime that has no answers to the crises we face.

Until October 2020, the term ‘critical race theory’ had never been mentioned in parliament as journalist Daniel Trilling points out. Then, during a debate on Black History Month, Tory MP Kemi Badenoch told the house:

We do not want teachers to teach their white pupils about white privilege and inherited racial guilt.

Any school which teaches these elements of critical race theory, or which promotes partisan political views such as defunding the police without offering a balanced treatment of opposing views, is breaking the law.

It gets worse. An antisemitic conspiracy traditionally espoused by the far-right, with clear origins in fascist thought, has become increasingly used by the conservative mainstream. The theory argues Western society has been undermined by a group of Jewish Marxist intellectuals. Its proponents include Norwegian mass murderer Anders Breivik.

Tory MP Suella Braverman was criticised by the Board of Deputies for using it in 2019. Two others were placed under investigation after putting their name to an open letter which used the term in defence of supposed British values. In 2019, Tory backbencher John Hayes reportedly cited the concept as he railed against legacy allegations against north of Ireland veterans in a letter to a constituent.

Assault on the left

The thing is, while the Tories love to try and position themselves as defenders of the British working class against so-called ‘woke-ness’, they are terrible across all fronts: class, race, gender, LGBTQIA+, the lot. It’s hard to miss the strong element of divide and conquer in this latest proclamation.

But there is more to it than that. The Tories are offering an imaginary enemy – ‘woke’ thinkers –  to distract from a real one – them. They have no answers to the crises we face like plummeting living standards, the climate crisis and the coronavirus (Covid-19) pandemic they have so grossly mishandled.

It’s on us to move beyond narrow conceptions of equality that ignore the real complexities of intersectional struggle and refuse to accept ruling class divide and rule.