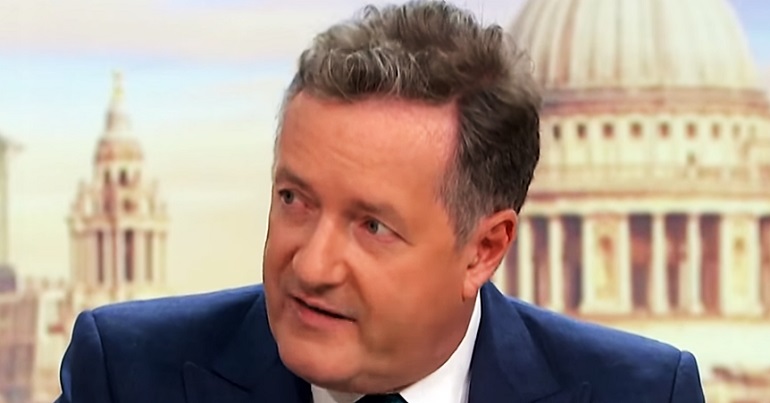 The Conservative government has come in for a lot of criticism over its coronavirus plan. But when even notorious TV presenter Piers Morgan seems to be talking sense, then we all really need to be worried.

Originally, the Tories’ response to the coronavirus pandemic has been to aim for “herd immunity“. But as The Canary previously reported:

the herd immunity strategy is regarded as an experiment because it is invariably applied to public health scenarios where vaccination is available and required on a mass scale. And that’s not yet the case here.

A group of UK doctors has written to the government, criticising this approach. Since then, health secretary Matt Hancock has claimed the herd immunity strategy no longer applies. So, we’re all still in the dark.

But Morgan has been spitting feathers over the Tories’ potentially catastrophic plan:

You’re literally doing nothing to halt the spread of Coronavirus. https://t.co/LvjND8h1tW

On Wednesday 11 March, he said on Good Morning Britain (GMB):

People are still saying on Twitter… ‘stop scaremongering’. No. Let’s just park all that nonsense to one side. This is not scaremongering,. This is real. Italy, the entire nation, has been locked down. It is in meltdown. Right? And we need to expect similar stuff to come here… we need to deal with it in the same way that our predecessors, our ancestors, have dealt with similar crises like world wars… you may think I’m exaggerating. We are at war with a virus.

‘This is not scaremongering, this is real… We are at war with a virus.’@piersmorgan says stopping the spread of coronavirus is more important than attending football matches or continuing our social lives. pic.twitter.com/bUhL0SKNjg

And now, as the Liverpool Echo reported, Morgan has had a row with Scotland’s clinical director, Jason Leitch, who was defending government plans not to force self-isolation yet and keep mass gatherings open. Leitch said his wife had gone to a concert last week. Morgan erupted, saying:

Why would you send your wife [sic] to a concert with 12,000 people? I’m sorry but you’re supposed to be in charge of public health, you can see what’s happening around the world…

In Austria, you can’t have gatherings of more than five people, but there’s you, a public health official in this country sending your wife to a concert with 12,000.

Leitch defended the government’s position, saying the science backed it up.

But some people on Twitter are agreeing with Morgan:

It is a strange and rare feeling to be on the same page as Piers Morgan.

This included people who said they normally wouldn’t:

For once, I agree with @piersmorgan. https://t.co/p7FWKcds0S

But not everyone did. Including this Tory MP:

Get a grip @piersmorgan pic.twitter.com/bgNnPTvsjd

This user didn’t agree either:

Anybody else wish that @piersmorgan piersmorgan would self isolate. He's out of control and fuelling this situation.

Wind your neck in

Of course, it’s hard to say. But with some doctors slamming the government, and the World Health Organisation (WHO) also expressing concerns, Morgan may be echoing the fears of many of the public. And here’s the problem.

Generally, he is one of the most controversial figures in the UK. A Donald Trump supporter, he is TV gold for GMB. As Vice wrote:

He is also a one-man clickbait machine. In just 30 days between May and June [2019], the Daily Express website ran 68 stories featuring Morgan in the headline…

But his views on coronavirus seem to be logical. Which is probably the plan. Morgan plays to the crowd and is clearly telling many people what they want to hear. This, in turn, could feed into a Brexit narrative of ‘distrust‘ of the political establishment.

Of course, we should be under no illusion that Morgan medically knows what he’s talking about either. As The Canary previously reported, just weeks ago he dismissed a chronically ill, disabled actress as making her conditions up.

So, it’s hard to trust the government on coronavirus. And while he may be making the right noises, we shouldn’t trust Morgan either. But it’s a damning indictment of the Tories’ strategy when even this most noxious of TV personalities is against them.