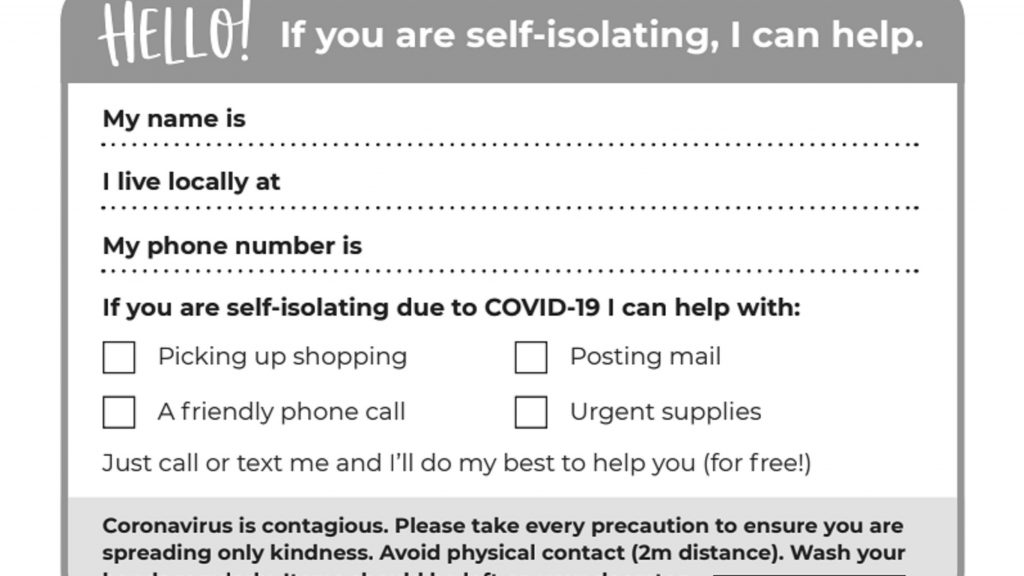 Thousands of Britons have joined local Facebook groups offering food and support for elderly and vulnerable people during the coronavirus outbreak.

The groups, named Covid-19 Mutual Aid, have been set up in most London boroughs, cities including Manchester, Newcastle and Birmingham, as well as smaller towns throughout the UK.

Some groups have received several thousand members in recent days as more and more people self-isolate to prevent the spread of the virus.

In one group, users shared a printable postcard which could be dropped in to neighbours’ letterboxes, with offers to pick up shopping, post mail or even just join them for a “friendly phone call”.

The National Food Service (NFS), an organisation aimed at tackling food insecurity, is now stepping in to offer the volunteers safeguarding training to help with issues such as data protection.

Louise Delmege, director of NFS Bristol, said: “I’ve been amazed by the quick response of the mutual aid groups. These have sprung up so quickly and are already forming into well-organised and thoughtfully co-ordinated groups.

“It’s fantastic to see so many people engaging with this, including a huge number who have never considered self-organised working before.”

THREAD: Here are all the Facebook groups being set up so that people can organise themselves to support vulnerable people in their communities during the Coronavirus pandemic. I will keep adding to the thread as more groups are created.

Delmege also warned, however, that there was a risk that well-meaning volunteers could inadvertently share others’ personal details in an attempt to help.

“I’m aware that many members are new to community work and don’t have any experience with safeguarding or data protection,” she said.

“I’ve witnessed some groups starting open lists of people’s contact details. This is really dangerous as lists of vulnerable people are a goldmine for scammers.”

Many of the offers to help are aimed at those over the age of 70, who may be asked to self-isolate for up to four months in the coming weeks.

At least 36 people have now died in the UK after being diagnosed with coronavirus. 1,543 people, meanwhile, have tested positive for Covid-19, up from 1,372 at the same time on Sunday. However, many thousands more are estimated to have been infected.

Some in the scientific and medical communities have criticised the British government for taking a slower and more relaxed response to the pandemic than other countries. Opposition leader Jeremy Corbyn has also criticised its approach while calling for further action to support people affected. Writing to party members, meanwhile, he said:

Instead of canvassing and campaigning, I would like Labour members to get involved in supporting vulnerable people in our communities – ensuring this is done safely and on the basis of public health advice.

The labour movement, rooted as it is in our communities, can help to ensure those who need support the most are not left to cope alone.

Please speak to your friends and family about what you can do, and look online and [on] social media for organisations already organising volunteer groups.