Forty feet high and under attack: the peaceful protestors facing the reality of a private security force above the law - Canary 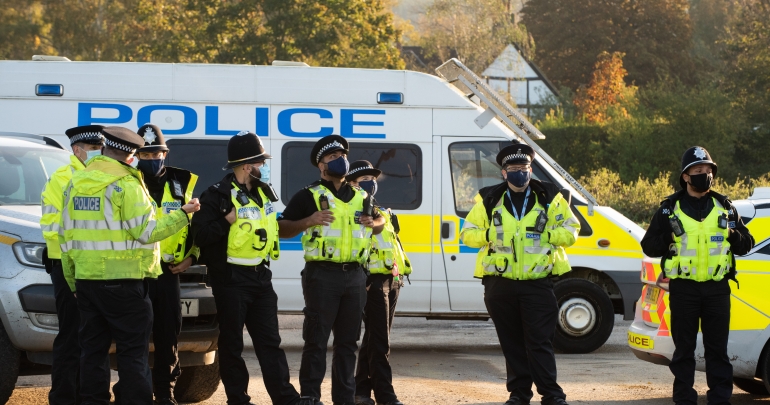 Screams, panic, alarm, and finally blood make this footage a scary glimpse into the reality of the anti-HS2 camp evictions. In this incident, protestors were 40ft high in a makeshift treehouse. They suffered repeated blows from a member of the National Eviction Team (NET) as he violently kicked and lashed out at the protestors at Poors Piece, Wendover.

The activists were there with one clear purpose: to protect the surrounding woodland from the relentless path of the HS2 train line. When completed, it will destroy 108 ancient and well-loved woodlands. So why did this situation escalate, turning a peaceful occupation of a tree violent?

This overt and physical aggression is more alarming when considered in the context of the situation. Activists are living up to 40ft in the air in tree houses for days at a time. They have limited food and water and are staying in freezing and wet conditions. This means that they’re exhausted and physically weak. Meanwhile, they’re at risk of being assaulted by physically strong men assisted by heavy and dangerous machinery. This underlying fear of violence is also, of course, having a damaging effect on the mental health of those in the camps who are always on high alert. They’re paranoid and have difficulty sleeping with concerns for themselves and their companions.

This violent behaviour towards protestors is nothing new and has been witnessed repeatedly throughout the year. Committed rebel Ricky, who often visits camps, reports that:

I’ve seen protestors punched, kicked, pushed, fingers bent and choke holds and I have also been threatened by a member of the NET (National Eviction Team) that he was going to ‘spark me out’

The violence seen last week demonstrates a worrying trend as it becomes more frequent and injuries become more severe. In another incident at Poor’s Piece, one activist was attacked and stamped on repeatedly by a bailiff. He was left overnight, unseen by paramedics, in a treehouse with severe damage to his spine and neck. This activist was eventually taken to hospital. This situation, in which his safety and physical health was severely compromised, first by the violence of the NET and then by the police and emergency services, reveals the issue at the core of this increasing violence.

HS2 Limited and the NET believe that they can behave above the law. Whether their actions are violence, the unlawful destruction of a woodland yet compensated for, or the eradication of wildlife before a survey has been completed, they’ve repeatedly seen how their actions go unchallenged by law and order.

Evictions themselves are facilitated by the seemingly unconditional support of the police. As rebel Ricky saw himself:

The police are always in the area of the attacks and most of the time watch it happening, yet when protestors report it to the police on site they refuse to act and tell protestors to call 101 to report the assault even though officers are there watching it.

Even a local landowner appears in shock when he reflects on the eviction at Poor’s Piece, stating:

The last 24 hours have been revealing. What we’ve seen is the reality of what’s being perpetrated by HS2, with the help of the local police force. At the grand age of 71, I’ve now been radicalised.

Clearly, alternative pressure must be made to protect those onsite. As one activist states:

I honestly believe that the police are facilitating the violence as not once have they stopped HS2 security and NET from attacking the protesters and very often the police are seeing protesters being assaulted yet stand by and allow it.

How do we protect activists from harm?

On 25 February, an action called No More Close Shaves outside HS2 offices was raising awareness of exactly this. Protesters highlighted the imminent need to prevent any further injuries or potentially even the loss of life.

On top of this, even when such extreme violence is taking place and caught on camera, the BBC is still failing to mention it in its reports. This is increasing the concern for protestors’ welfare, because so many incidents go undocumented. So it prompts the question: if HS2 Limited, the police, and the media are all turning a blind eye to such overt uses of violence, how do we protect these activists from harm? And how do we hold HS2 Limited and the NET to account?