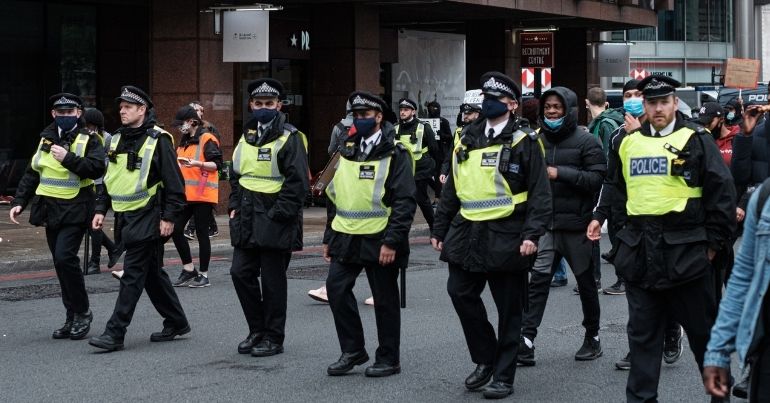 According to a report from Her Majesty’s Inspectorate of Constabulary and Fire & Rescue Services (HMICFRS), “forces still do not fully understand the impact on individuals and communities of the use of police powers”. The report examined police use of force and stop and search against people from Black, Asian, and minority ethnic (BAME) backgrounds.

The report highlights that:

Over 35 years on from the introduction of stop and search legislation, no force fully understands the impact of the use of these powers. Disproportionality persists and no force can satisfactorily explain why.

The MacPherson report 22 years on

The people at Black Lives Matter UK shared their views on Twitter. They said that they – and the police – already know exactly why police disproportionately use their powers on people from BAME backgrounds. It’s because of institutional racism:

Hint: The word they are looking for begins with an R and ends with M. https://t.co/31LEpP00mi

The MacPherson report was published in 1999 following the racist murder of Stephen Lawrence and police mishandling of the case. It found the Met police to be institutionally racist and set out 70 recommendations on how they should tackle this. Institutional racism, as set out in the MacPherson report, is defined as:

The collective failure of an organisation to provide an appropriate and professional service to people because of their colour, culture, or ethnic origin. It can be seen or detected in processes, attitudes and behaviour which amount to discrimination through unwitting prejudice, ignorance, thoughtlessness and racist stereotyping which disadvantage minority ethnic people.

It’s appalling that over 20 years after the MacPherson report was published, forces across the UK are still unwilling and unable to recognise the realities of institutional racism and disproportionate policing, let alone start tackling them.

In response to the HMICFRS report, shadow justice secretary David Lammy pointed to an independent review which he led. It looked into the treatment of, and outcomes for, BAME people in the criminal justice system:

All people – regardless of their ethnic background – must be treated the same by police and the whole justice system.

The government "accepted" in my review that action must be taken to explain or change disproportionality. Now it must act like it. https://t.co/zkatVz3Jar

Lammy’s 2017 review found that very little had changed since the MacPherson report. And in some cases, things had regressed. Despite making up 14% of the UK population, people from BAME backgrounds made up 25% of prisoners. Meanwhile, the BAME proportion of youth prisoners rose from 25% to 41% between 2006 and 2016. And while Black people make up just 3% of the population, they “accounted for 12% of adult prisoners” and “more than 20% of children in custody”.

In spite of these high profile calls for institutional reform, we’ve seen little positive change in policing and the justice system. Black people continue to bear the brunt of racist policing. According to 2019/20 data, officers are:

Today, Black people account for 8% of deaths in police custody. It’s been over 50 years since Yorkshire police murdered David Oluwale. But since then, not one officer has been successfully prosecuted for killing a Black person in police custody. The joint enterprise doctrine and gang databases continue to target and criminalise young Black men. Meanwhile, forces continue to surveil and criminalise Muslim communities as a result of Prevent and the war on terror.

Institutional racism bolstered by the state

that which, covertly or overtly, resides in the policies, procedures, operations and culture of public or private institutions – reinforcing individual prejudices and being reinforced by them in turn.

We see this manifested in the government’s racist immigration laws, border control practices, and the hostile environment. It’s in a civil service with a culture of racism and exclusion. Resistance to acknowledging the legacies of slavery, colonialism, and empire in schools, universities, and beyond. And failures to protect the human rights of Black people in the UK. Furthermore, the government is responsible for prison and police expansion.

We have ample evidence to suggest that Britain’s police are institutionally racist. Forces should be beyond getting to grips with the basics of racism and disproportionality. They should have been doing serious work to tackle it for decades. We don’t need any more reviews – we need action.